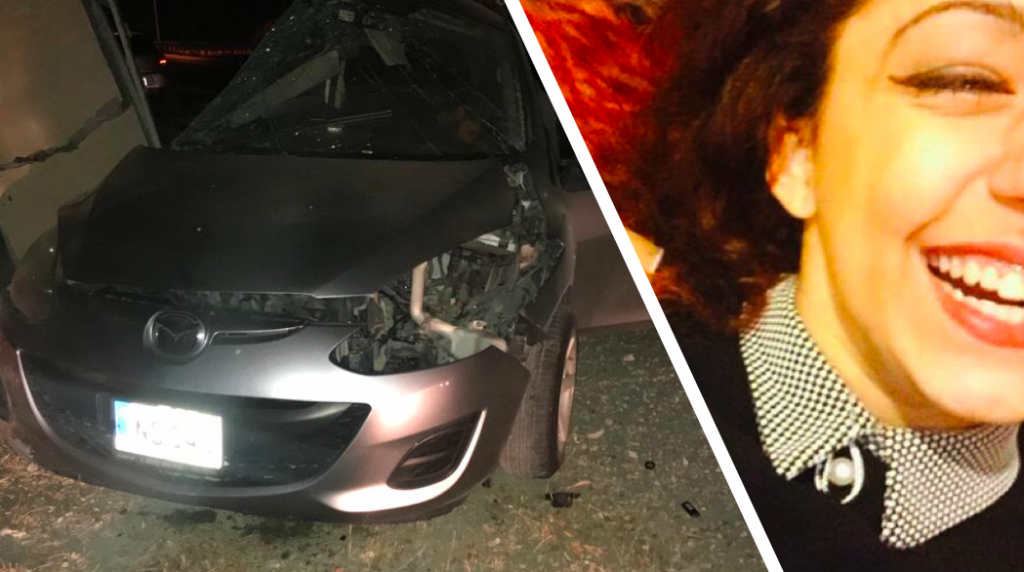 The family of a young woman from Ilford, East London, who was killed in a road traffic accident in the Turkish Republic of North Cyprus, have appealed to the Turkish Cypriot authorities to investigate further claiming she was being blackmailed at the time of her death.

Fatma Kaşıkçı, aged 24, was driving a small silver Mazda on the main Lefkoşa-Gazimağusa when her vehicle came off the road and hit an electricity pylon near the Alpet-Hocaoğlu petrol station in Lefkoşa on Sunday night, 18 October.

The London-born Turkish Cypriot mother of two young children was pronounced dead at the scene. A passenger, Cuma Yıldırım, 23, was injured and taken to Lefkoşa State Hospital.

What initially seemed like a tragic car accident has taken a more sinister turn following serious allegations made by the victim’s mother Ayşe Kaşıkçı.

The day after the accident, a visibly distraught Mrs Kaşıkçı released an 8-minute video on social media pleading with the TRNC authorities to stop Cuma Yıldırım from leaving the country. In the clip, which has gone viral, the tearful mother accused Mr Yıldırım of taking her daughter’s money and being involved in her death.

“It’s not even been 24 hours and this young man is free. He’s free after paying 4.5 billion [Turkish lira] stolen from my daughter. For the love of God, I appeal to everyone….The prosecutor thought it appropriate to release him and now they are trying to take him to Turkey.

This morning, Mrs Kaşıkçı told T-VINE that her daughter did not have a driving licence and was not insured to drive. She believes Fatma was forced to drive the car on Sunday night under duress.

“My daughter called me from the quarantine hotel and said she had to take [Cuma Yıldırım] to Mağusa as he was drunk. Apparently he’d been staying with her for a few days. How he got into the quarantine centre I have no idea,” said Mrs Kaşıkçı.

“I told her to send him back in a taxi, but she said she had to go too, and when they got to Mağusa his aunt will call to talk to me.

“Some time later I got a call and was told to steady myself, before being told Fatma had died in a car accident,” Ms Kaşıkçı added, before breaking off sobbing.

According to the mother, Ms Kaşıkçı had arrived in North Cyprus on 16 October for a short break. She had bought a return ticket and was scheduled to travel back to London on 30 October.

“I’d agreed with my daughter to pick her up from Heathrow when she returned,” Mrs Kaşıkçı explained.

Due to North Cyprus’ coronavirus rules, on arrival at Ercan Airport Fatma Kaşıkçı was obliged to do seven days mandatory quarantine in a centre of the government’s choosing. She had been allocated a room at the Riverside Hotel in Alsancak, Girne.

Mother alleges Fatma was being blackmailed

The devastated mother claims her daughter was being blackmailed by Mr Yıldırım at the time of her death, following a summer romance in North Cyprus.

“We were on holiday in [North] Cyprus this summer when the two met through mutual friends and they became romantically involved. They stayed in contact after she came back to London, but she became really distressed after he threatened to release inappropriate pictures of her,” the mother alleges.

“I was furious and made it clear to him he can’t threaten my daughter like that. I love and know my daughter, and those photos won’t make me think any less of her.

“If he needed money, he should have just asked, but to play with my daughter’s honour like that is disgusting,” Mrs Kaşıkçı said.

Fatma’s mother, who is originally from Limassol, said her daughter flew to North Cyprus with the intention of dealing with the threats, and believes she was forced to drive the car on the night of her death:

“I’ve since found out Fatma borrowed money to get out there. I think she was going to pay him off to stop the photos being circulated,” she said.

“We as a family have so many questions. She hasn’t got a licence, so what made her get behind the wheel that night? How was she even allowed out of quarantine? It’s vital the police do a thorough investigation. This is not a simple road traffic accident. My daughter was being blackmailed, and now two small children have lost their mother,” Mrs Kaşıkçı told T-VINE.

She urged the authorities to broaden their investigation and believes the phones of both her daughter and Mr Yıldırım holds the key to the incident.

“I hope they [police] keep hold of Fatma’s and his [Cuma Yıldırım] phones, and do not allow vital evidence to be destroyed, or permit him to flee Cyprus.”

Ms Kaşıkçı is currently looking after her daughter’s children, a four-year-old girl and a two-year-old boy. She is planning to fly to North Cyprus as soon as she can. Due to the pandemic she has to take a Covid-19 test and wait for the results before she can travel.