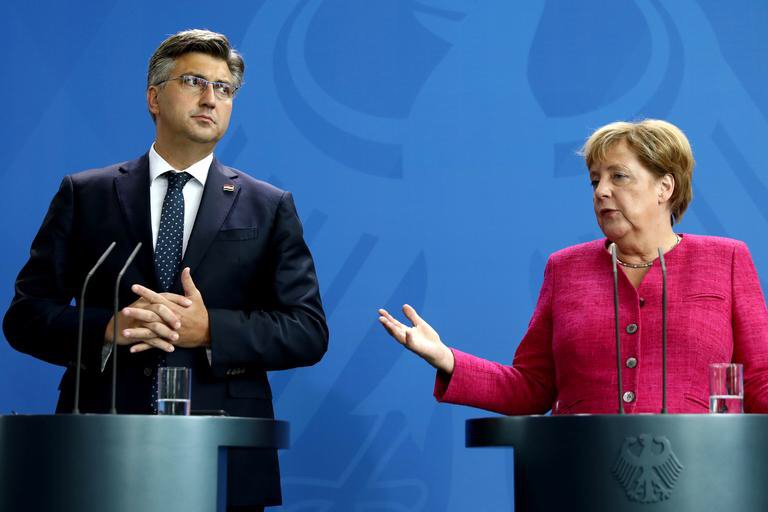 German Chancellor Angela Merkel announced on Wednesday that Germany will provide more financial aid to Turkey to help with the hosting of 3.5 million refugees in the country.

Addressing media together with Croatian Prime Minister Andrej Plenkovic (pictured above) at a sideline event during the European People’s Party Congress held in the Croatian capital Zagreb, Mrs Merkel said that Germany is committed to ‘preserving the Schengen Area’ and confirmed the ‘migrant deal with Turkey’ is a key aspect of that.

Ankara has regularly aired its frustration at the European Union’s failure to fully implement the migrant deal signed in March 2016, which aimed to stem the flow of refugees heading to Europe.

The 2016 deal committed a total of €6 billion in financial aid to Turkey, which was due in two stages to help bankroll projects for Syrian refugees.

In return, Turkey has increased its patrols and taken other measures to discourage mass international migration through the Aegean Sea, including improving the conditions of more than 3 million Syrians living in Turkey. The result saw a major drop in the number of irregular migrants trying to enter the EU.

It is understood only the first payment by the EU has been made. Official figures show Ankara has spent in excess of $40 billion (or €36 bn) on supporting the 3.5 million refugees living across Turkey since the Syrian conflict began in 2011.

Other aspects of the deal which the EU has also failed to honour includes visa-free travel for Turkish citizens and updating its customs union agreement with Turkey.

The EU-Turkey bilateral trade deal was first struck back in 1995. The terms are in desperate need of an overhaul, so they not only reflect the current trading needs of both sides, but to also keep pace with the new generation of free trade agreements the EU has signed with other parties.