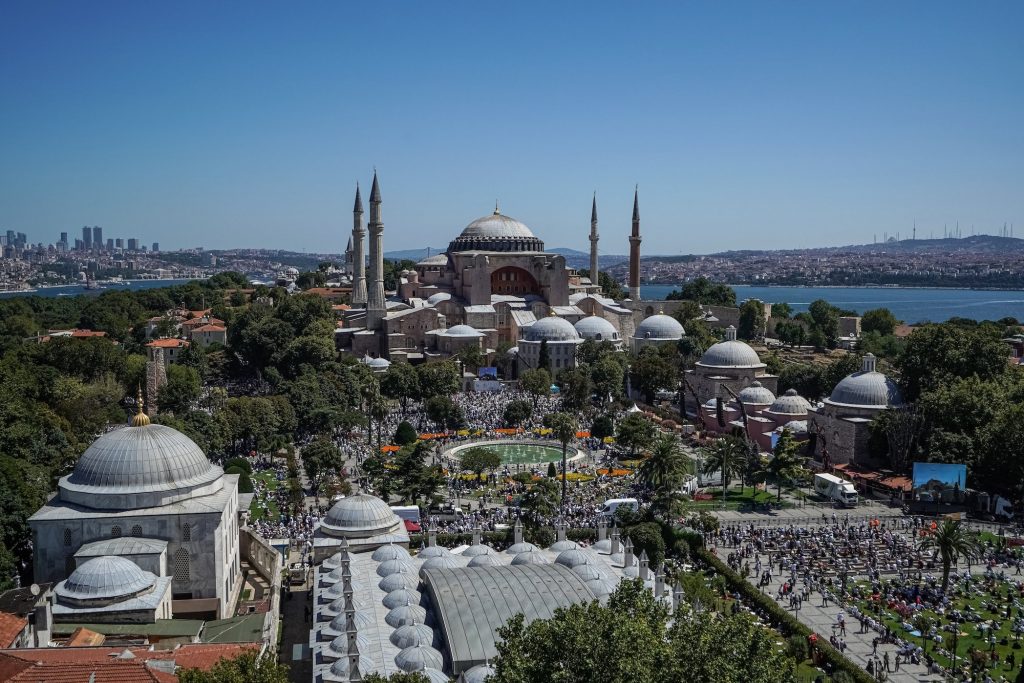 It was a momentous occasion for the country’s pious Muslims, who have for years been calling for the building to be changed back into an Islamic house of worship.

For the past 86 years, Hagia Sophia had been open to the public as a museum, drawing in millions of visitors every year, including Orthodox Christians who view the site as the centre of their faith, much like Catholics view the Vatican.

Built 1,500 years ago, the former cathedral was first converted into a mosque by Ottoman Sultan Mehmed II after he conquered Istanbul, then known as Constantinople, from the Byzantines in 1453. Minarets were added to the exterior of the building, while the interior was adapted for Islamic worship, which it remained until the twentieth century.

The status of the landmark building was changed a fortnight ago, on 10 July, following a decree signed by Turkey’s President Recep Tayyip Erdoğan, who was also present at Friday’s historic prayers at the newly named Hagia Sophia Grand Mosque (Ayasofya-i Kebir Camii Şerifi in Turkish).

While the President’s decision thrilled the country’s conservatives, it dismayed many Turks who saw it as the latest assault on the secular legacy of Mustafa Kemal Atatürk, the founder of the Turkish Republic.

Hagia Sophia is now under the control of Turkey’s religious affairs directorate, Diyanet. The body’s head and the country’s top cleric Ali Erbaş stirred controversy by walking up the staircase of the pulpit of Hagia Sophia carrying an Ottoman sword on Friday, a highly symbolic move that reflects the AKP government’s neo-Ottoman policies.

“The longing of our nation that had become a deep wound is over,” Mr Erbaş in his sermon, adding “The doors of the Hagia Sophia Mosque as in other mosques of the country will be open to all the servants of Allah.”

Mr Erbaş’s invoked the wrath of the country’s secularists when he took a swipe during his sermon at Atatürk for his decision to convert the mosque into a museum:

“Any property that is endowed is inviolable in our belief and burns whoever touches it; the charter of the endower is indispensable and whoever infringes upon it is cursed.”

The father of the Turks’ decision in 1934 to change Hagia Sophia into a mosque was influenced by the discovery of the building’s incredible mosaic and Christian heritage, which had been buried under the Islamic décor.

The move to restore these works and allow easier access to Christians was a reflection of Turkey’s new secular, and Western-friendly approach, and was also regarded as an important bridge-building exercise with neighbouring state Greece. Not surprisingly, it was the Greeks who led the international outcry against the conversion of Hagia Sophia back into a mosque.

Only 500 were admitted to Hagia Sophia for its first Friday prayers as a reconverted mosque, while thousands prayed on the grounds of the historic site 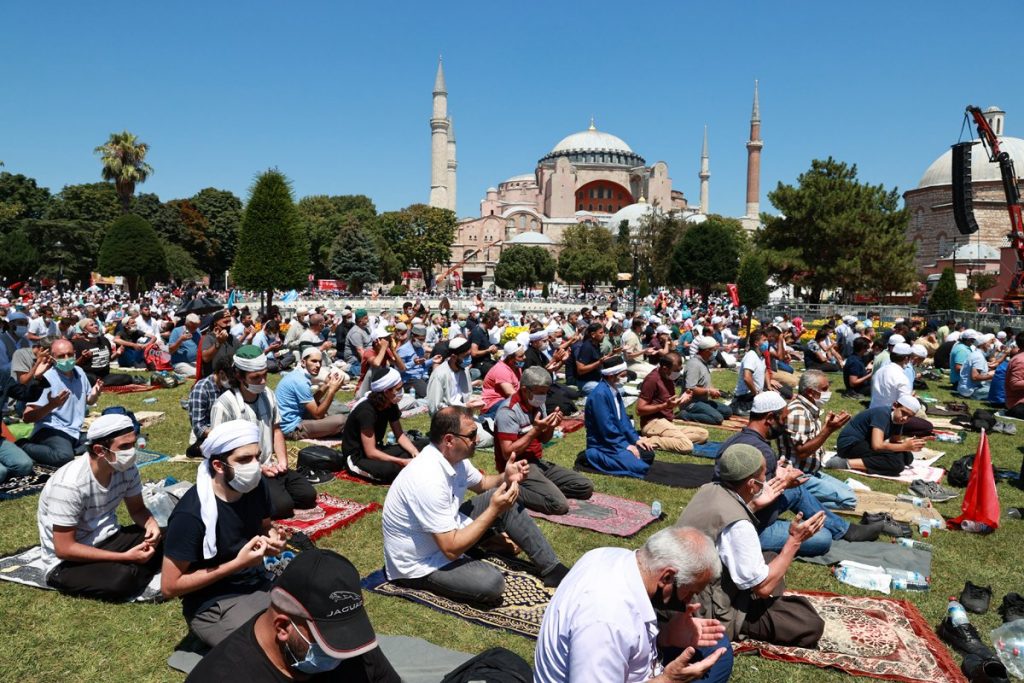 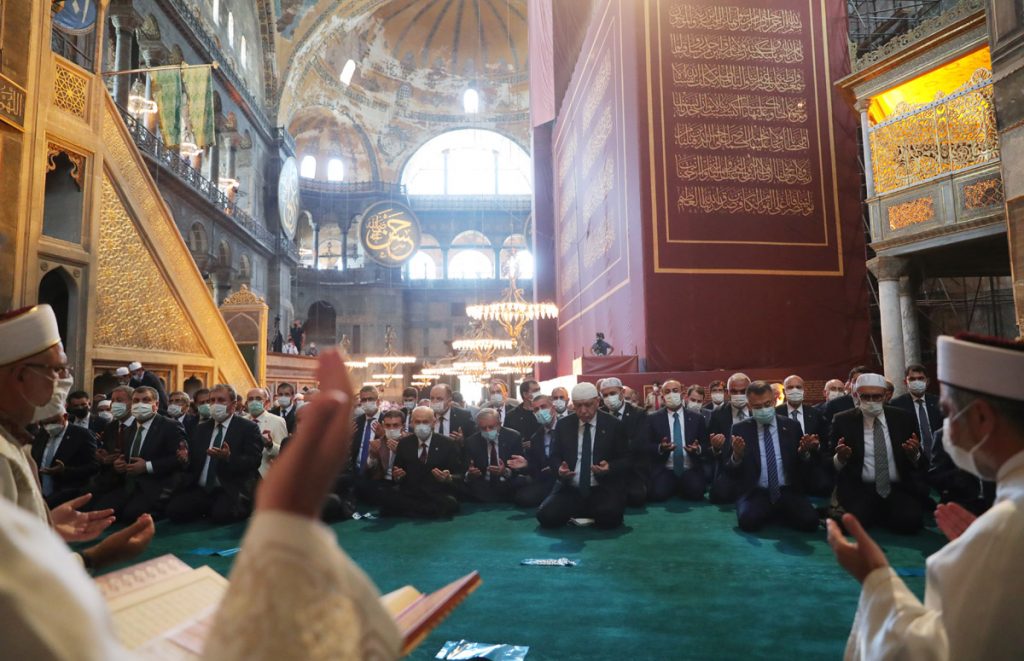 Greece’s Prime Minister Kyriakos Mitsotakis called it an “affront to civilisation of the 21st century.” Speaking in the same vein, his Culture Minister Lina Mendoni said the move was “an open provocation to the entire civilized world.”

There have been anti-Turkey street protests in Greece, with right-wing demonstrators in Thessaloniki burning a Turkish flag, and Greek business people calling for a trade boycott of Turkey.

Trade between the two countries, where political tensions have become unusually high of late, is annually worth $2.8 billion, but with Greece exporting significantly more to Turkey ($1.6 billion), it’s not clear if such a campaign would be widely supported.

There has been condemnation and concern from elsewhere too. Russian Bishop Hilarion, a senior member of the large and influential Russian Orthodox Church, described it as “a blow to global Christianity,” while Russia’s Deputy Foreign Minister Alexander Grushko said that Moscow regretted the decision.

“The cathedral is on Turkey’s territory, but it is without question everybody’s heritage,” Mr Grushko told the Interfax news agency the day after the building’s status was changed.

The Vatican also spoke out about the Hagia Sophia. Pope Francis said “I think of Hagia Sophia and I am very saddened,” during a recent Sunday sermon.

A statement from UNESCO said, “It is regrettable that the Turkish decision was not the subject of dialogue nor notification beforehand.” The United Nations’ cultural body says it will now review the status of Hagia Sophia as a world heritage site.

The criticism has been firmly rebuffed by a defiant President Erdoğan, who sees the decision as a matter of national sovereignty.

Speaking a day after his decree on 10 July, the Turkish president said: “Those who do not take a step against Islamophobia in their own countries … attack Turkey’s will to use its sovereign rights.”

The Istanbul-based Ecumenical Patriarch Bartholomew I, the spiritual leader of the world’s Orthodox Christians, warned in late June that the building’s conversion into a mosque “will turn millions of Christians across the world against Islam.”

President Erdoğan countered by stating that the internal decorative Christian elements within the sacred space will only be concealed during times of Islamic prayer, and that the Hagia Sophia will remain open to everyone:

“Like all our mosques, its doors will be open to everyone – Muslim or non-Muslim. As the world’s common heritage, Hagia Sophia with its new status will keep on embracing everyone in a more sincere way.”