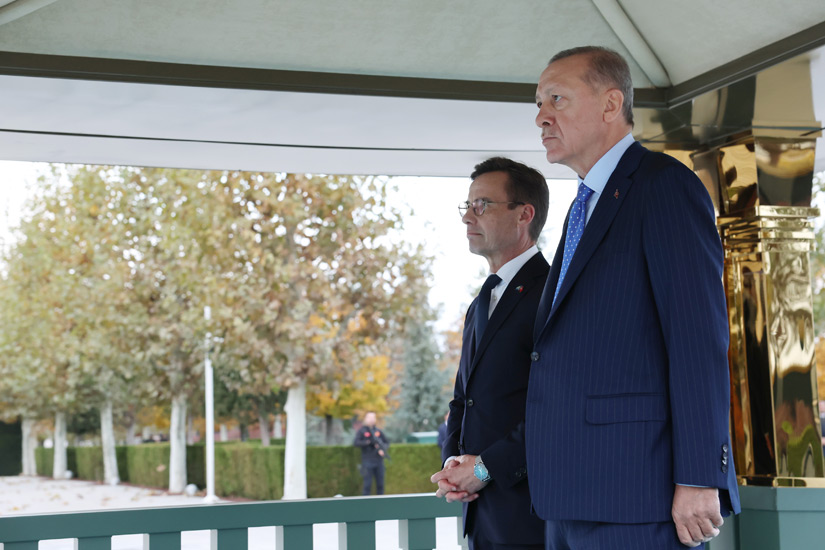 Turkiye remains unimpressed with the response of Swedish officials after protesters hung an effigy of Turkish President Recep Tayyip Erdoğan from a lamppost in the capital Stockholm on Thursday.

A Kurdish group called the Swedish Solidarity Committee for Rojava has claimed responsibility for the effigy stunt near Stockholm City Hall.

In its communications, the group said they wanted to evoke the hanging of Italy’s former fascist dictator, Benito Mussolini, and urged President Erdoğan to “take the chance to step down now, so you don’t end up upside-down in Taksim Square”.

The distasteful images and accompanying message led to an outcry in Turkiye. Foreign Minister Mevlüt Çavuşoğlu blamed the stunt on terror organisation Kurdistan Workers’ Party (PKK) and its Syrian offshoot, the YPG militia.

Mr Çavuşoğlu told media that Sweden had a choice, to either “turn a blind eye to this and bow down to it” or keep its promises and take effective action against “terror groups”.

Relations between the two countries have been strained for several months after Turkiye objected to Sweden’s NATO membership bid. They said Turkish approval is conditional on the Swedish authorities cracking down on militants and terror groups operating inside the country. Ankara also wants Sweden to extradite more terror suspects to Turkiye. The Stockholm will have done nothing to ease concerns in Ankara.

On Thursday, the Turkish Foreign Ministry summoned the Swedish ambassador to express its anger over the effigy incident, while a planned visit to Ankara by the Swedish Speaker of Parliament, Andreas Norlén, has been cancelled by his Turkish host, Mustafa Şentop, the Speaker of The Grand National Assembly of Türkiye.

Turkish prosecutors have also launched their own investigation into the stunt, according to Anadolu News Agency.

“Sweden surrendered to the PKK. It thinks it’s a state. You will not find a contact person in Turkiye again. Nah you enter NATO!”, tweets Turkish presidential advisor Ayhan Ogan with an image of the effigy

Responding to developments, PM Kristersson told media: “People tried to show their views on the Swedish NATO accession through a disgusting way of portraying President Erdoğan in almost something looking like an execution. That is bad in every sense.”

The Swedish leader, who heads a centre-right coalition government since, said he understood why Turkiye is outraged, saying “we would show the same reaction if this was aimed at a Swedish leader.”

He previously told Swedish broadcaster TV4 on Friday that it was “extremely serious” to stage a “mock execution of a foreign democratically elected leader” in a country where two leading politicians have been killed.

PM Kristersson expressed hope that the meeting between the Turkish and Swedish parliament speakers would take place at a later date.