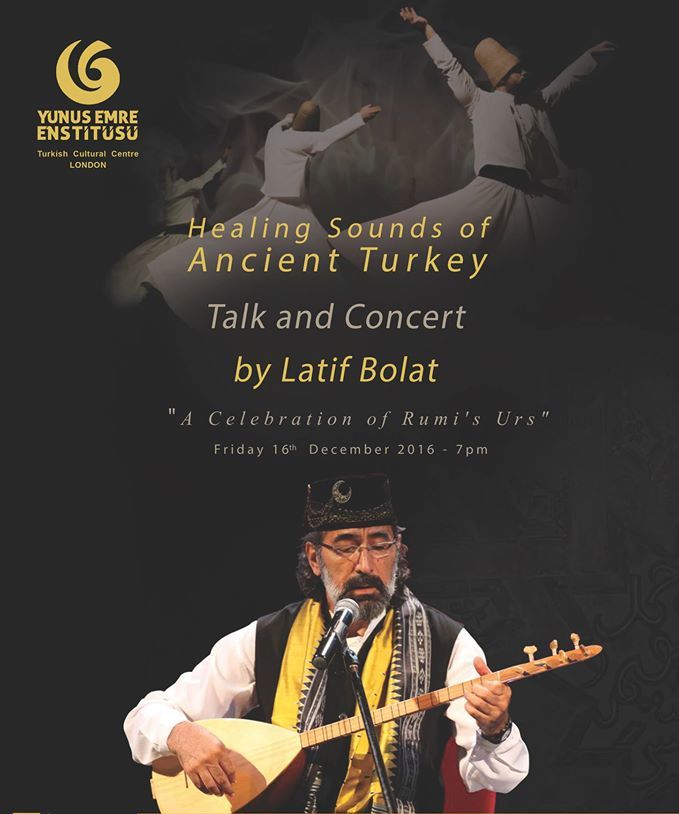 Turkish mystic Latif Bolat is a modern-day troubadour, travelling the world sharing his love and knowledge of Sufi culture: its music, poetry, stories and spirituality.

On Friday 16 Dec. this award-winning artist, author and lecturer will be at the Yunus Emre Institute in London to present an enlightening evening of words and music from ancient Anatolia.

Born in Mersin, Latif Bolat is one of the Turkey’s most distinguished musicians, specialising in Turkish spiritual music and culture. Now resident in America, the former Gazi University Folklore and Music Studies graduate has performed and taught his craft worldwide, playing concert halls, colleges, universities, performing arts institutions and festivals in Turkey, North America, the Far East and across Europe.

A multi-instrumentalist, Bolat most commonly plays the bağlama during his performances, and his vast repertoire encompasses songs in Turkish classical, folk and Sufi styles.  He is also gifted with a sublime voice, spellbinding audiences as he breathes life into centuries-old Sufi poems and sacred songs, İlahi and Nefes, composed by Turkey’s great mystic poets Yunus Emre, Niyazi Misri and many other ancient troubadours.

For his London concert, Bolat will narrate in English and Turkish poems and stories of 13th century Sufi poets Yunus Emre and Mevlana Rumi, while also giving context to them by explaining the socio-political and cultural elements behind Sufi art and spirituality. His programme of devotional poetry set to music will include his own compositions of sacred ballads, with the performance set to a visual display of stunning scenery from Anatolia to provide a complete cultural experience of the spiritual sights and sounds of ancient Turkey.

Entry to the concert is free, but attendees need to register in advance.

Tickets: you can pre-register and obtain you ticket via Eventbrite