“Hellim is not just a packet of cheese,” Minister Çolak warns EU Commission 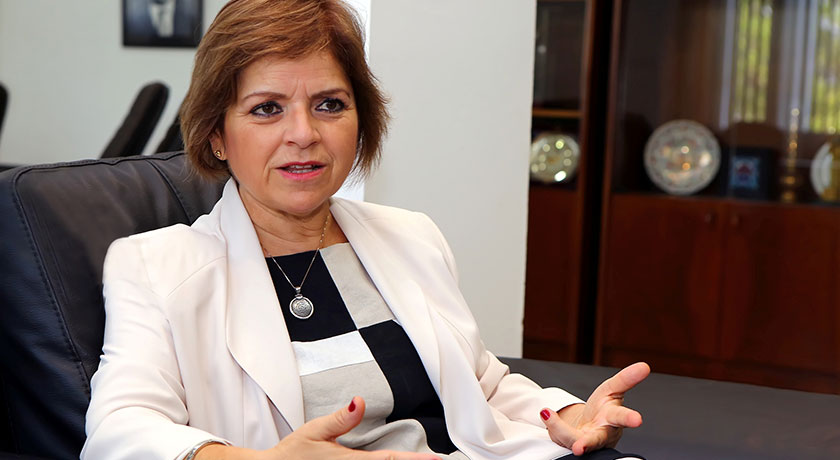 TRNC Foreign Minister Emine Çolak said this week that if the issue of hellim cheese is resolved as a confidence building measure (CMB), with economic benefit to both sides, it will enhance the negotiation process. Any other strategy could have a negative impact on the Talks, which are currently progressing positively, she said.

At a conference organised by the Cyprus Turkish Chamber of Industry (CTCI), Minister Çolak reminded the audience that a quarter of the TRNC’s export trade depends on hellim, which provides jobs for 17% of the population.

She said hellim had a big cultural significance for Turkish Cypriots, and as a globally known and sold product, had a large role in the quest for peace in Cyprus.

Minister Çolak said the Greek Cypriot administration had applied to the European Union for a Protected Designation of Origin (PDO) for hellim: “They requested that the monitoring of hellim take place in ‘areas under the effective control of the Republic of Cyprus.’ We said it was not possible for the monitoring in the North to be conducted by the Greek Cypriot Ministry. Our position was deemed valid, and alternatives were sought.”

“A mutually-agreed document treating hellim as an ‘exceptional situation’ was produced after the meeting on 16 July 2015 between the two leaders and the President of the EU Commission, Claude Juncker. It accepted that an independent institution would be assigned by the EU to monitor hellim production in the TRNC. The Commission also prepared a draft amendment to the Green Line trade Regulation to take effect with the PDO.”

“The Greek Cypriot administration then demanded various changes. We were quite happy with what we saw as a progressive agreement,” said Çolak, adding: “After reaching it, we were disappointed by the amendments requested by the Greek Cypriots, who said it was a threat to their sovereignty. The Commission listened to their objections, and prepared another document. It then transferred the issue to the EU Council so that it could not be disputed any further, and a conclusion be reached. “

“The assumption of mutual benefit between the Turkish and Greek Cypriot sides on the issue of hellim is an important aspect of economic growth. But we are not just talking about a packet of cheese. Any negative decision taken at this stage by the Commission over the demands of the Greek Cypriots pertaining to the hellim PDO could harm the Talks. Since the Greek Cypriot side is not attempting to cooperate with us over the monitoring of hellim, the EU Commission should consider the Green Line Regulation implementations throughout this process.”

“Greek Cypriots are not negotiating in good faith” Mr Fahri Zihni, chair of Embargoed!, the London-based organisation which campaigns to remove trade and other embargoes imposed by the UN and the EU upon the TRNC, said this week: “We have lobbied EU Commissioners and discussed hellim issues with the TRNC’s Chamber of Commerce, and we have hosted the Chamber of Industry’s President Cirali at a recent hellim round table discussion. It is very encouraging to see that Foreign Minister Çolak has picked up, developed and reinforced industry concerns in a clear attempt to make the PDO work for the benefit of both sides.”

“It is clear from the way that the Greek Cypriots have speedily rejected both the letter and the spirit of this specially- negotiated hellim PDO that they are not negotiating in good faith. If they can renege on the Hellim agreement between themselves, the EU and Turkish Cypriots, what guarantee is there that they will not renege on an agreed constitution for the future of Cyprus?”