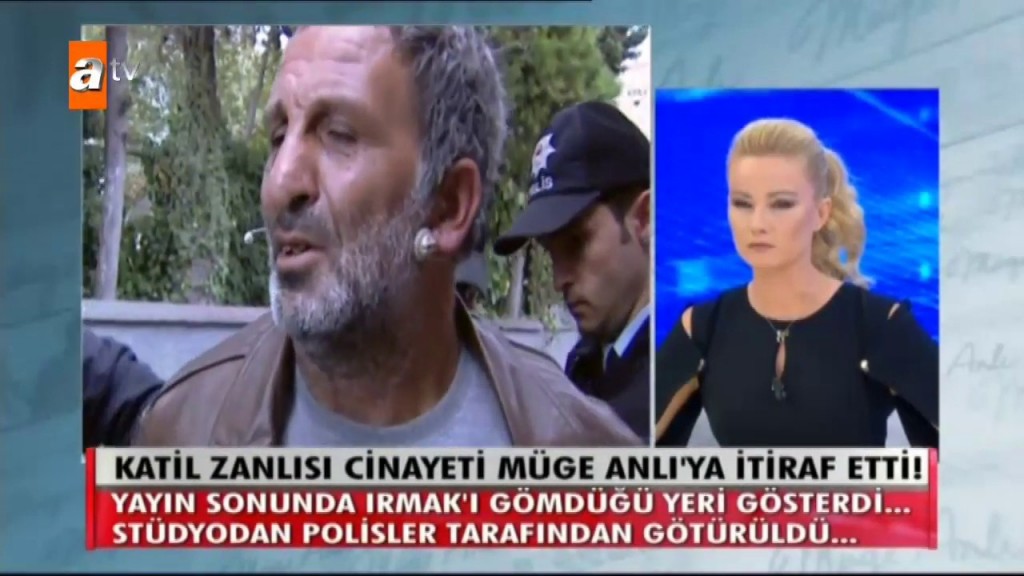 A guest who was being quizzed about the disappearance of a neighbour’s 3.5 year-old daughter in Manisa, western Turkey, made a disturbing confession on television. Himmet Aktürk told presenter Müge Anlı that he had killed and buried little Irmak Kupal, who went missing .

A resident in the same Alaşehir neighbourhood as the Kupal family, Aktürk agreed to appear on ATV’s daily Müge Anlı ile Tatlı Sert show, which probes unsolved murders and the disappearance of missing people in Turkey. Along with other studio guests that included Irmak’s father Bilal, Aktürk was asked to explain his movements on the day the little girl disappeared on 14 Oct.

Before the end of the show, Aktürk asked to speak to Anlı privately and they both went to chat in a room backstage. After the programme had officially ended, Aktürk went back into the studio with Anlı and her team who kept filming as Anlı repeatedly questioned her guest, showing him images of the victim and crime scene, when events took an unexpected turn.

Cracking under the pressure, Aktürk confessed to murdering Irmak. He told the presenter the young girl was playing outside his home, so he brought her indoors. After killing her, he placed the toddler’s body in a sack and dumped it in a bin, but when it was not emptied that night he moved the body. With images of his neighbourhood broadcast live into the studio, Aktürk pointed to where he had buried the body in a nearby vineyard.

Police were called to the ATV studios, where Aktürk was immediately arrested. In a full confession, he admitted to raping and strangling the toddler, who had been playing outside his house on the afternoon of 14 Oct.

Using the information Aktürk gave in the ATV studios and aided by specially-trained dogs, a team of 20 police began searching the area. They recovered the body of the little girl three days later.

Footage from the TV show was also used as evidence in court, where Aktürk was convicted of rape and murder. He has been remanded in custody until sentencing.

While many neighbours spoke highly of Aktürk and were in disbelief at him committing such a crime, Turkish media report that fifteen years ago he was jailed for 1.5 years for abusing his niece.