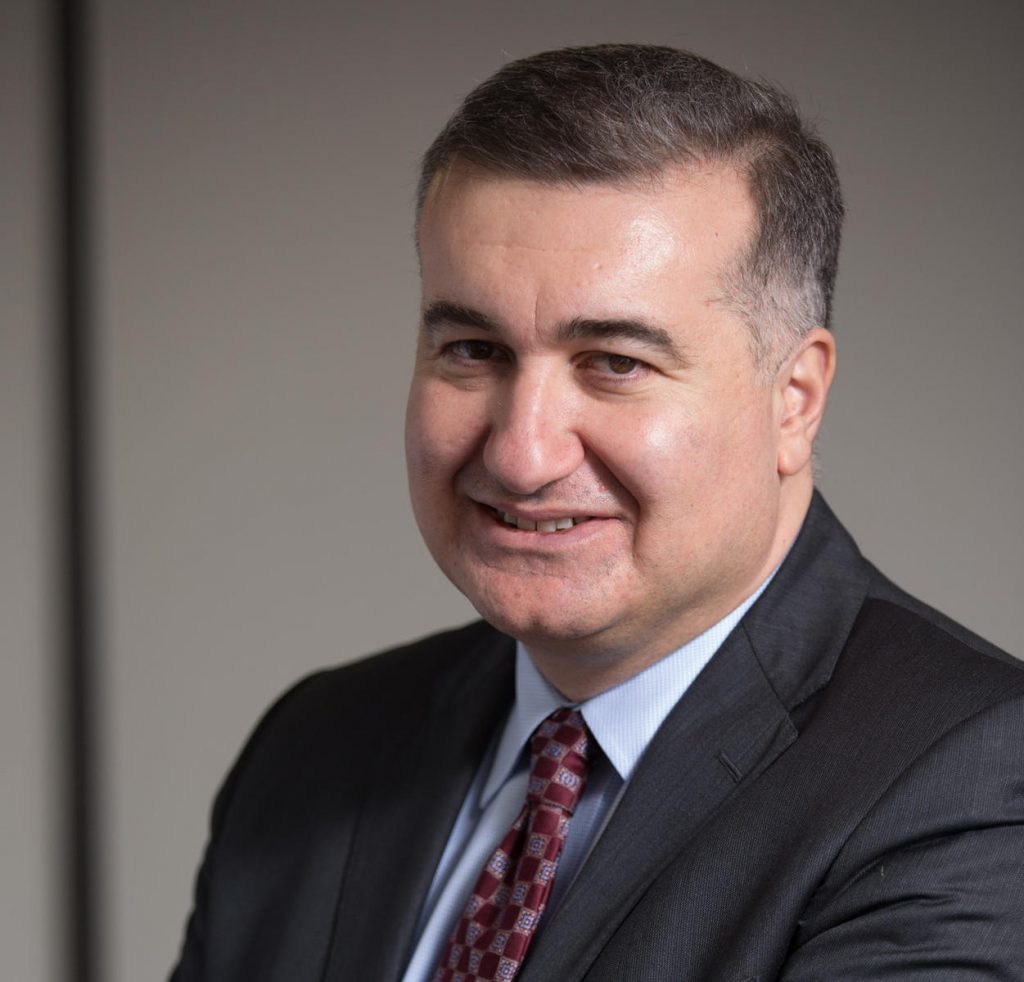 In July of this year Tahir Taghizadeh, Azerbaijan’s popular and long-serving ambassador to London, departed Britain. His successor, Ambassador Elin Suleymanov, arrived the following month ready to take up his new duties as the Ambassador of Azerbaijan at the Court of St. James’s.

Prior to his London appointment, Ambassador Suleymanov spent 16 years in the USA, initially as Consul General in Los Angeles, before becoming Azerbaijan’s ambassador to Washington in perhaps the most crucial decade of this Eurasian Turkic republic’s 103-year history. Last year, with the help of Turkey, Azerbaijan liberated its Karabakh region following 30 years of occupation by Armenia.

T-VINE caught up with the new ambassador to ask him about his first impressions of the British capital, his assessment of UK-Azerbaijan relations, and his experience of the deepening fraternity between Turks worldwide.

First, an overview of the career of this distinguished diplomat from Baku, Azerbaijan.

Who is Ambassador Elin Suleymanov?

In July 2021, the President of the Republic of Azerbaijan Ilham Aliyev appointed Elin Suleymanov as Ambassador to the United Kingdom of Great Britain and Northern Ireland.

Prior to that Mr. Suleymanov served as Azerbaijan’s long-time Ambassador to the United States of America. Over the course of a decade, he represented his nation’s interests in the dynamically changing environment of Washington.

In 2005, Mr. Suleymanov broke new ground as the nation’s first Consul General to Los Angeles. Mr. Suleymanov led the team, which established an Azerbaijani diplomatic presence on the West Coast that spans 13 states.

His earlier diplomatic experience includes serving as a Senior Counsellor in the Foreign Relations Department of the Office of the President in Baku, Azerbaijan, and as Press Officer of the Azerbaijani Embassy in Washington DC.

Before joining the diplomatic service, Mr. Suleymanov’s career saw him work with the United Nations High Commissioner for Refugees in Azerbaijan, and at Glaverbel Czech, a leading glass manufacturing company in Central Europe.

A graduate of the Fletcher School of Law and Diplomacy in Medford, Massachusetts, Mr. Suleymanov also holds graduate degrees from the Political Geography department of the Moscow State University, Russia, and from the University of Toledo, Ohio.

Mr. Suleymanov has authored numerous articles and is a frequent presenter at academic events. He speaks three languages: Azerbaijani, English, and Russian. He was born in Baku, Azerbaijan, in 1970, and is married.

What were you most looking forward to about being in London? What have you enjoyed so far?

I was actually expecting a gloomy and cloudy summer in London and I understand it was the case at least for most of summer 2021. But quite surprisingly or not, a heatwave caught us in early September and I already came to understand that here in London you need to be prepared for dramatic weather changes throughout the day. Just as one famous saying goes: “If you don’t like the weather in Britain, just wait five minutes.”

Jokes aside, the UK is a fascinating country with such a beautiful capital city, London, and I am already amazed by the vibrant and diverse environment that the city offers. Of course, I am also enamoured by the food scene.

The relations between Azerbaijan and the UK are of strategic character, and the two countries enjoy strong bilateral relations in many areas.

As the UK strives to secure more rigorous trade relations with different partners and to become a more active force for good at the international level, Azerbaijan expects that the ties between the two will become even closer now that the Brexit is realised.

Very recently, the UK government allocated £500,000 to the UNDP [United Nations Development Programme] to help clear landmines in Karabakh to make the area safe, prevent injuries and save lives following the last year’s 44 days of hostilities between Armenia and Azerbaijan.

Briefly, following the decades-long mutually beneficial co-operation, the agenda of collaboration between Azerbaijan and the UK is quite busy and as an Ambassador of Azerbaijan in the UK, I look forward to work with all stakeholders to contribute to the further advancement of our bilateral relations.

Describe your experience of the Turkish fraternity

Azerbaijan and Turkey are “one nation, two states” [“tek millet, iki devlet’], as stated by our National Leader Heydar Aliyev.

Throughout my years in USA, we have received great support from the Turkish community and our Turkish counterparts. I am very grateful for the support I have always got from the Turkish embassies and consulates, be it in Los Angeles, in Washington or here in London. There is no daylight between us.

Back in July 2020, we mourned the death of the victims of Armenia’s ceasefire violations on the Armenia-Azerbaijan border together with Turkish Ambassador in Washington in the Islamic Centre in Maryland.

Before leaving Washington, the Turkish Ambassador to Washington, Murat Mercan, hosted the warmest farewell event for me at his regal residence. I am immensely grateful to Ambassador Mercan for his kind gesture and for bringing so many friends together at this farewell event.

I am also thankful to Ambassador Ümit Yalçın, Ambassador of Turkey to the UK, for his warm welcome and friendship.

For us, Turkey is our home and Turkish people are our family. I am grateful that our Turkish brothers and sisters have always shown deep commitment to strengthen this bond between our fraternal nations.