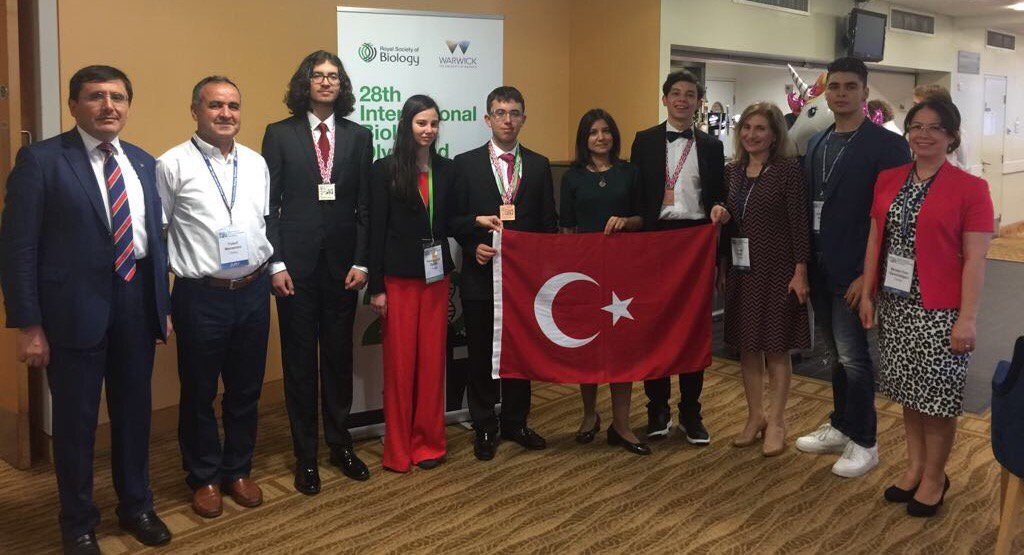 A team of four students from Turkey picked up three medals at the 28th International Biology Olympiad (IBO). Hosted by Britain at the end of July, Seçkin Yasar was awarded a silver medal, while Ata Alpay Canbaz and Fatih Özlügedik each won a bronze.

A total of 241 students from 68 countries took part at the IBO, an annual event which this year was held at the University of Warwick in conjunction with Britain’s Royal Society of Biology. All competitors were pre-university students ranked in the top four of their home National Biology Olympiad.

In addition to their success in Britain, the brainy students are also rewarded by TÜBİTAK – the Scientific and Technological Research Council of Turkey. Medal winners receive a cash prize according to the colour of their medal: 10,000 TL for gold, 9,000 TL for silver, and 7,500 TL for a bronze. They are also awarded a scholarship for the remainder of their studies and an automatic pass (no entrance examination needed) into the Turkish state university of their choice to pursue their undergraduate studies. And for those wishing to study abroad, their participation at the highly regarded IBO will aid their admittance into prestigious overseas universities.

The high achievements of Turkey’s best biology students came a week after an announcement by the country’s Education Minister İsmet Yılmaz that evolution was being dropped from the national curriculum from 2018 in favour of religious topics such as jihad (Muslims’ spiritual struggle against sin). Turkey joins Saudi Arabia in banning the topic for high school students, as most other Muslim majority states allow both evolution and creationism to be taught side-by-side.

The irony was not lost on social media observers. One person responding to the Turkish Embassy’s tweet from the IBO in Warwick wrote: “If only we could have one day without irony…I wonder if evolution was among the medal-winning topics?”