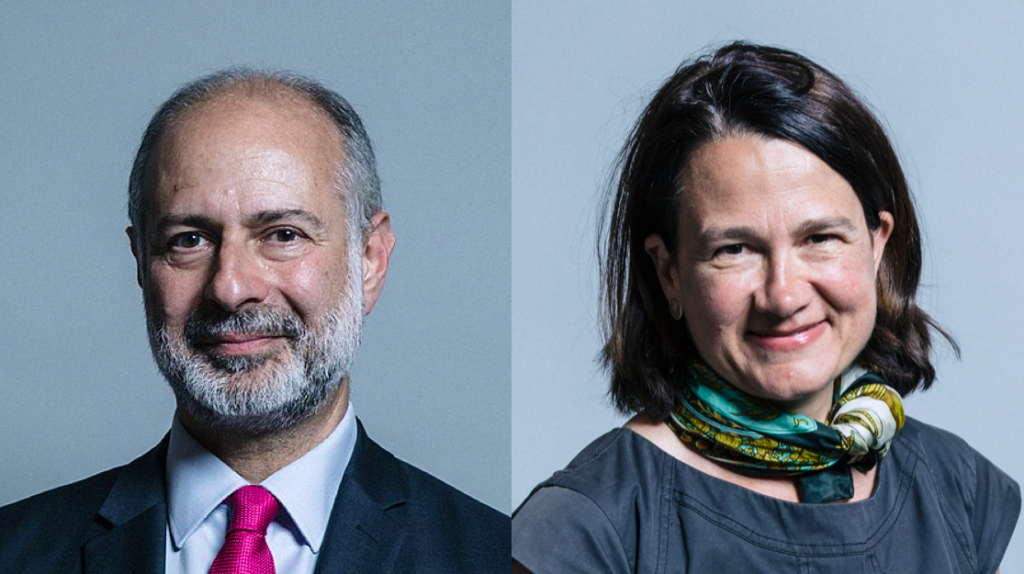 Alongside the inflammatory terms, the letter ignored the new democratic mandate ushered in by last year’s election of Ersin Tatar as President of the Turkish Republic of North Cyprus (TRNC), and disregarded entirely Turkish Cypriot positions on the hydrocarbon issue and re-opening of Varosha.

British Turkish Cypriot community leaders also called out the two shadow ministers for failing to consult with them about their views on Foreign Secretary Raab’s visit to Cyprus a fortnight ago, contradicting claims by Hamilton and West that they were reflecting the concerns of the “British Cypriot community.”

“This is a very disappointing letter from two Labour shadow ministers on Cyprus that has really angered and upset our community. The language and selective history used by Mr Hamilton and Ms West is drawn straight out of a Greek Cypriot propaganda manual.

“Labour never consulted us and it is deeply misleading for them to refer to the “British Cypriot community” when it’s clear they are only representing the views of Greek Cypriots.”

“Labour already has a bad reputation among the Turkish Cypriot community for its anti-Turkish bias and this letter from Fabian Hamilton and Catherine West to the Foreign Secretary proves nothing has changed under [new Labour leader] Keir Starmer,” the BTCA head told T-VINE.

Semahat Mustafa: “For a politician we have regularly welcomed into the TWPA to vilify our ethnic homeland, and ignore our rights and suffering in Cyprus is absolutely disgraceful. We expect better from our local MP”

“The letter to Dominic Raab totally disregards the existence, rights and views of Turkish Cypriots. Hamilton and West have failed to acknowledge the new mandate following President Ersin Tatar’s election, and they continue to demonise North Cyprus,” Ekrem continued, before adding:

“Labour only cares for Greek Cypriots – and British Turkish Cypriots are rightly furious.”

Hamilton and West’s letter was as result of the Foreign Secretary’s trip to Cyprus on 4 February, where he met with the island’s two leaders, President Nicos Anastasiades of the Republic of Cyprus, and TRNC President Ersin Tatar.

The meetings enabled the UK government to determine the two sides’ current positions ahead of the upcoming UN-hosted 5+1 summit, to be attended by Turkish Cypriots and Greek Cypriots, and the island’s three guarantors Britain, Turkey and Greece.

In response to that visit, the two shadow ministers highlighted in their letter that “both Labour and Conservative UK Governments have committed to the unification of the island on the basis of a bi-zonal, bi-communal federal political settlement.”

They claimed that because the Foreign Secretary had failed to publicly reiterate this policy during his Cyprus visit, it had created “considerable anxiety” in the “Republic of Cyprus and the British Cypriot community”.

Yet Turkish Cypriots had viewed Dominic Raab’s visit positively, with President Tatar stating afterwards that his meeting with the Foreign Secretary had taken place in a “very sincere and constructive atmosphere”.

During his meetings and in his public statements afterwards, the Foreign Secretary stressed the need for “flexibility” on both sides, so a compromise permanent political settlement can be reached for the “benefit of both Cypriot communities”.

Raab’s statements are consistent with those made by his predecessors, including Boris Johnson who also urged “flexibility” when he visited the island as Foreign Secretary in 2016.

Ignoring all of that, Hamilton and West urged the Foreign Secretary not to break with the UK’s “historic red lines”. They pressed him and his government to reaffirm their “commitment to a bi-zonal, bi-communal federation for the Island of Cyprus, as set out in relevant UN Security Council resolutions”.

Labour out of kilter with UN and realities on Cyprus

Labour’s stance seems unnecessarily rigid compared to the broader approach being adopted by others, including the UN Secretary General António Guterres, who only last month expressed his willingness to change or expand on the existing political framework for Cyprus.

There have been no less than 11 attempts by the UN to find a federal solution to unite Cyprus after its division along ethnic lines following the outbreak of the conflict in December 1963.

Each plan for a new power-sharing arrangement between the two Cypriot communities has been rejected by Greek Cypriots, with Guterres presiding over the last attempt at Crans Montana, Switzerland, in July 2017.

Dr Serkan Birgel: “Primarily, there is no reference to the Turkish Cypriot community at all, both here in the UK or in Cyprus. The way the letter is set up, you have Ersin Tatar versus the “British Cypriots” and the Republic of Cyprus, and that is that”

At that time, TRNC President Mustafa Akıncı had made huge concessions to get a deal over the line, including pledging to end the Guarantor system that would have resulted in the total withdrawal of Turkish troops and the removal of Turkey’s right to unilaterally intervene on the island in future.

Akıncı also offered major territorial adjustments that would have seen at least 40,000 Turkish Cypriots – most refugees from the original conflict – uprooted again.

Despite being backed by a less than enthusiastic Turkey, the Greek Cypriot leader Anastasiades refused the plan, causing the talks to collapse.

Since then there has been a major shift in Turkish Cypriot politics. Ersin Tatar beat Mustafa Akıncı in last October’s TRNC presidential campaign by pledging to pursue a two-state solution.

The UN Secretary General reflected these changes in comments he made on 28 January 2021:

“There are these changes in the administration of northern Cyprus. It is important that there is a chance for all the people to frankly discuss among themselves how they see the future and to see how to move forward.”

“Obviously, this [UN bi-zonal, bi-communal mandate] is not an impediment for the parties to present the positions they will present. I am always ready to go to the Security Council and if there is an agreement of the parties enlarging the scope of the negotiations, to be interpreted as a common agreement in this regard,” Guterres added.

Remarking on the developments Lord Northbrook, the co-chair of the All-Party Parliamentary Group (APPG) for the TRNC, told T-VINE:

“I viewed (as I believe the Group will) Mr Raab’s visit in a positive light especially as he was prepared to meet the TRNC President.”

“I believe that the bi-federal, bi-communal solution is dead after the failure of the Crans Montana talks. President Akıncı tried so hard to get these over the line and made concessions that even made Turkey nervous and not wishing to support his re-election,” the Conservative peer said.

“I am supportive of the new President’s idea of a Two State solution,” Lord Northbrook stated, adding that “It is not for the Group to dictate individual political party’s policies towards the TRNC. We aim to discuss this new proposal on an All Party basis, so that hopefully this will be fed into political parties’ policy processes.” 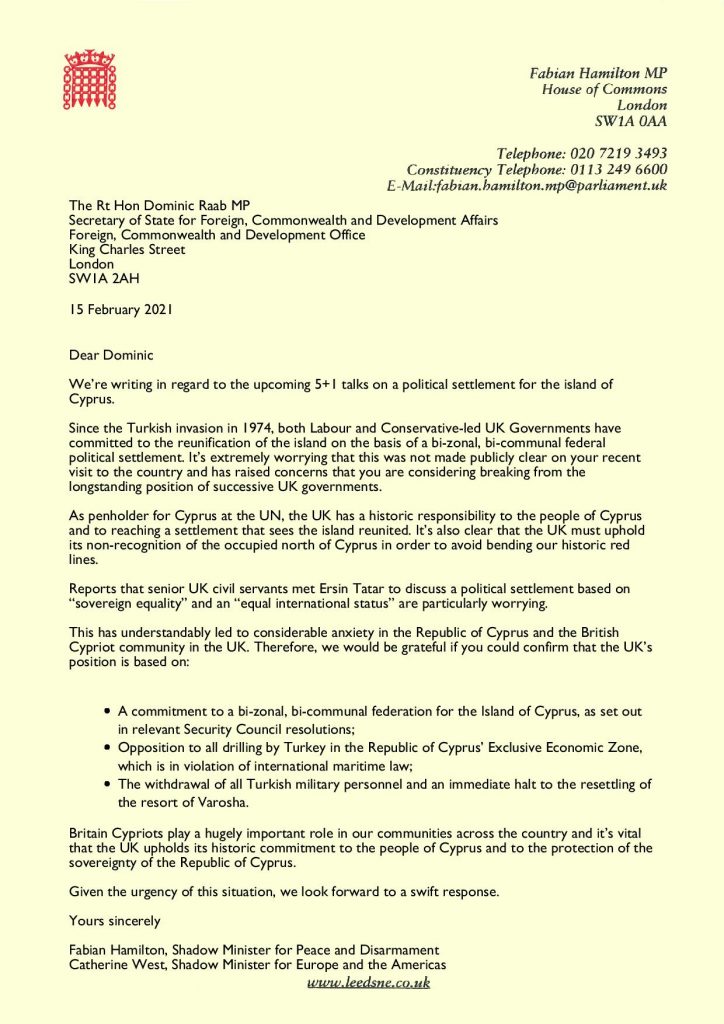 Hamilton and West’s letter lays bare Labour’s outdated positions on Cyprus, and the need for the party to update itself with the realities on the island.

Dissecting the letter for T-VINE, international relations analyst and researcher Dr Serkan Birgel said there were “a number of misgivings that make it hard to salvage.”

“The peace process is meant to be “Cypriot owned and Cypriot led, which obviously includes the Turkish Cypriot community”, a point clearly missed by Labour’s two shadow ministers.

“Primarily, there is no reference to the Turkish Cypriot community at all, both here in the UK or in Cyprus. The way the letter is set up, you have Ersin Tatar versus the “British Cypriots” and the Republic of Cyprus, and that is that,” states Dr Birgel.

“Peace is not best served by omission of the Turkish Cypriots, including the full range of their political views. This seems to be rather undemocratic,” notes Dr Birgel.

Lord Northbrook: “I believe that the bi-federal, bi-communal solution is dead after the failure of the Crans Montana talks”

He also asserts that Hamilton and West’s efforts to present Tatar’s invocation of ‘sovereign equality’ and ‘equal international status’ as virtually blasphemous is out of kilter with the UN:

“The U.N. Secretary General has himself said that though he may stick to the established mantra of the ‘bi-zonal, bi-communal federation’, he is still open to listening to everybody, and that the mantra is “not an impediment to the parties presenting the positions they will present.

“In contrast, invoking “anxiety”, the letter seems to want to shut-down or cancel a fair and critical hearing of these viewpoints.”

Labour’s failure to embed the views of Turkish Cypriots into its Cyprus policy coupled with the ministers’ use of offensive terminology could alienate the party further from British Turks in local election year.

The party has traditionally enjoyed significant support from the estimated half-a-million strong community, but anti-Turkish positions championed by former leader Jeremy Corbyn had seen thousands desert the party at the General Election. That estrangement seems set to continue.

Commenting on social media, lawyer Ergin Balli, a known Labour sympathiser, described Hamilton and West’s letter as “an absurd neo-colonialist attitude – as if the Turkish Cypriots have no say about their future!”.

Talking to T-VINE in a personal capacity, Mrs Mustafa said:

“I am very upset that Catherine West has called North Cyprus “occupied”. For a politician we have regularly welcomed into the TWPA to vilify our ethnic homeland, and ignore our rights and suffering in Cyprus is absolutely disgraceful. Others I’ve spoken to feel similarly disrespected. We expect better from our local MP.”

Businessman Hayrettin Ramis wrote that, “Catherine West ought to get her facts right. Turkey did not invade in 1974. Turkey is a Guarantor, so was within its rights to intervene in order to prevent Turkish Cypriots being massacred. The British are also guarantors, but stood by and did nothing.

“For 50 years the GC’s rejected deals based on bi-zonal bi-communal federations, so now that option is no longer on the table whether they like it or not. It’s time to move on so they had better come to terms with that.”

T-VINE contacted Fabian Hamilton and Catherine West for comment, but there was no response from either MP.