The Transport Ministry for the Turkish Republic of North Cyprus (TRNC) has stepped in to end confusion about whether international students can fly to Ercan Airport from countries with a major outbreak of mutant coronavirus.

Foreign students from high risk countries, including South Africa, who are studying at TRNC universities are now explicitly included in the Transport Ministry’s latest ‘NOTAM’ (official notification to airlines and airports), enabling them to enter North Cyprus.

Responding to T-VINE’s questions about the status for international students from the UK, South Africa, Denmark, Netherlands or Brazil, TRNC Minister for Public Works and Transportation Ünal Üstel (pictured above) said:

“The NOTAM regarding air travel restrictions has been updated on the 13th of this month and will be in effect until February 28, 2021 11:59PM.

“According to this, students studying in the TRNC who reside in the UK, South Africa, Denmark, Netherlands or Brazil will be able to enter the TRNC with a negative PCR test – which is accepted in Turkish or English only – and a 14-day quarantine, which will be paid by the TRNC government.”

“I advise foreign students or any foreigner who is planning to travel to the TRNC to check the NOTAMs (notice to airmen) published in our official website (www.bub.gov.ct.tr) before they do so,” the Minister added.

T-VINE had been contacted by a number of foreign students from Britain and South Africa in their final year of studies, who were struggling to get official information from their TRNC universities and government officials about whether they could return.

In December 2020, the Turkish Cypriot authorities, in line with others around the world, had banned entry to those from high risk countries. The only exemption was for TRNC citizens.

A NOTAM issued on 30 January extended permission to “TRNC permanent residency holders who can prove this with a document”.

T-VINE published the story on 9 February confirming the TRNC’s Covid travel rules was applicable to international students too. On hearing this, Malik Margan was able to book his flight to Ercan and confirmed in an email to Mr Harper that he had returned to North Cyprus.

Lee-Ann Lowe, however, was unable to do the same. When the 20-year-old student tried to book a flight from Johannesburg O.R. Tambo International Airport, officials there told her she was not permitted to fly to Ercan Airport.

When she showed them the T-VINE article showing the rules had been extended to students too, the officials rang the TRNC. Turkish Cypriot immigration officials told Johannesburg airport staff that international students from South Africa and other high risk countries were still banned.

VOIS Cyprus told T-VINE the confusion in the TRNC travel rules was also impacting other African students, who had to fly through South Africa to reach Istanbul and then Ercan.

After more communications with the TRNC London Office and TRNC government, T-VINE finally received confirmation today that the matter was resolved with the Transport Ministry issuing a new NOTAM and parallel NATEX notification for sea ports and ferry companies clarifying that the TRNC’s foreign students from high risk countries were also able to enter the country.

The 13 Feb. NOTAM states: “As a result of the recent increase in the number of COVID-19 cases and the news that the virus has mutated in some countries, it has been deemed appropriate to prohibit people who have been in the United Kingdom, Netherlands, Denmark, South Africa and Brazil within the last 14 days to protect public health and fight the virus in our country.

“It has been decided that only TRNC citizens, higher education students who are registered or will be registered during the current academic year, and TRNC permanent residence holders who can prove this with a document, from these countries should be allowed to enter the country and remain in quarantine for 14 days.” 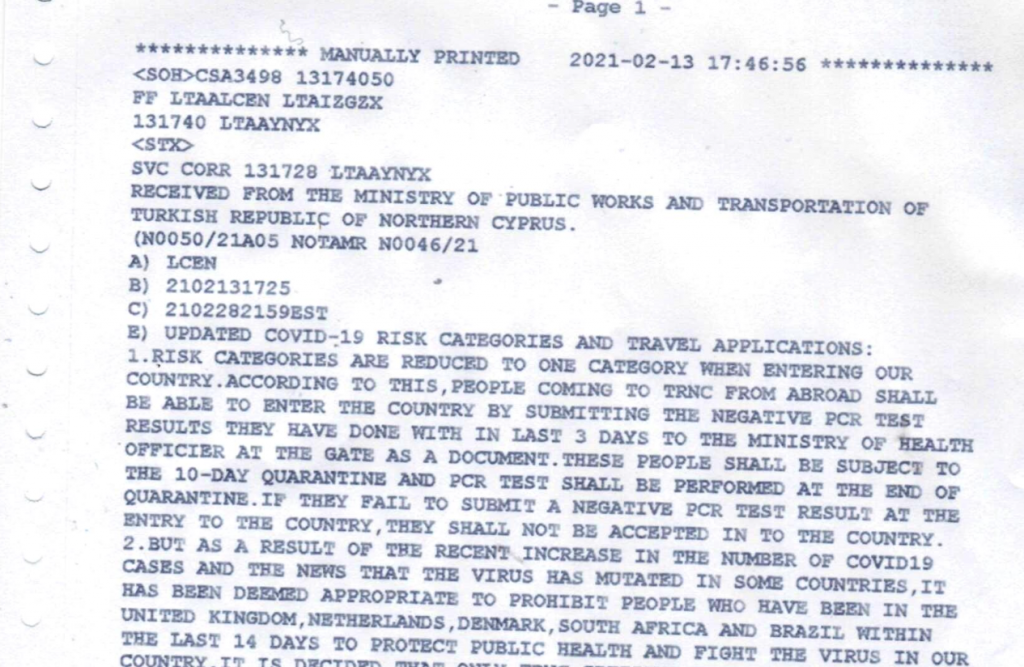