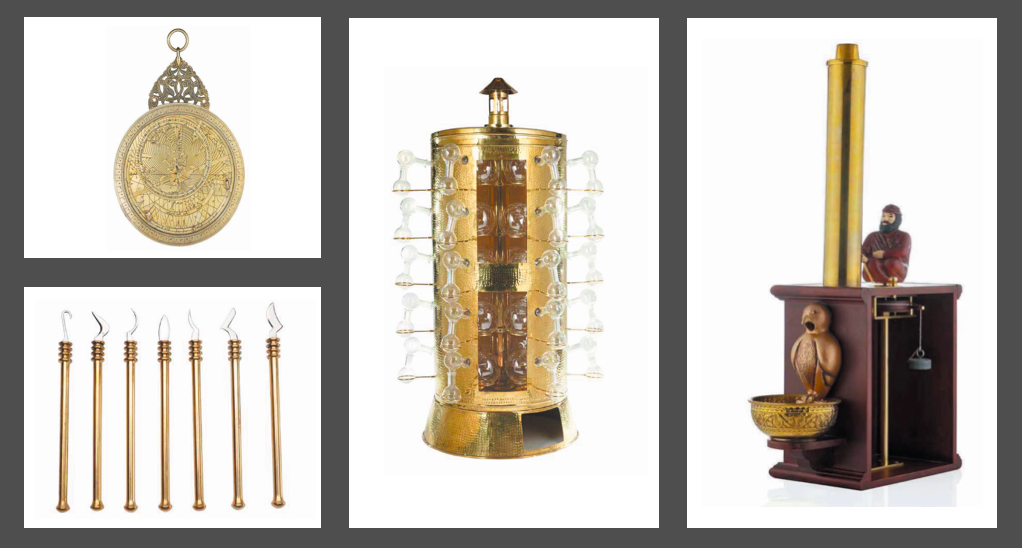 Don’t miss the chance to see ‘The History of Turkish-Islamic Science in 100 Objects’, a stunning exhibition showcasing the contribution of Turks and Muslims to science between the 9th and 16th centuries.

The exhibition is being held at the historic Bedesten, in the Old City of Lefkoşa (North Nicosia), as part of the 450thbirthday celebrations of Turkish Muslim philanthropic body Evkaf (short for the Cyprus Vakf Administration).

The period from the end of the 8thcentury onwards is often referred to as the ‘Golden Age of Islam’. For more than eight hundred years major Islamic capital cities such as Baghdad, Cairo, Córdoba, Damascus, and Istanbul (then Constantinople) were the main intellectual centres for science, philosophy, medicine, and education.

At a time when Europe was in the Dark Middle Ages, Arabs and Turks were busy building on the early inventions of the ancient Greeks, making important advances in a host of scientific areas, from measuring time and celestial bodies, through to producing new and improved medical instruments, and technology harnessing the power of water and light.

Between them, they have produced the most advanced sundial in Islamic civilisation (İbn eş-Şâtir), dozens of surgical instruments, many that look similar to those used by dentists and doctors today (al-Zahrāwī), the ‘Balance of Wisdom’ – multi-purpose measuring scales (al-Hazinî), and the finest astrolabes and navigation quadrants (al-Mizzi).

For Turks, one favourite invention must surely be the steam-powered spit roast by Ottoman polymath Takiyuddin Muhammad ibn Ma’ruf. Regarded by his peers as “the greatest scientist on Earth”, Takiyuddin’s original invention is not only a forerunner to the modern-day doner kebab roaster, but is also the first known device in history to use steam power for a practical application.

Another is the Sultan Bayezid II Hospital, which in the fifteenth century was treating patients for mental ill-health. Renowned traveller and chronicler Evliya Çelebi wrote that the large hospital complex, built on the banks of the Tunddzha River in Edirne, had dedicated psychological treatment areas using aromatherapy, water and music therapy.

You can see these and a host of other fascinating objects at the exhibition, which is split into different areas, such as Clocks, Medicine, Optics, and Astronomy.

Also on display are the manuscripts of these scientific greats containing details and drawings of these inventions, which were used by the exhibition team to create exact replicas of the original inventions.

Prof. Sezgin traced the manuscripts of Muslim scholars from the Middle Ages, amassing a monumental collection of works that he classified and categorised. He used these to reproduce these inventions, which have led to this incredible travelling exhibition.

Celestial sphere showing where stars are in the sky

“Our goal is to ensure that the knowledge of the history [of scientific contributions by Muslims] will shed light on a new understanding of the present and a create a vision that will guide the future,” he added.

The North Cyprus leg of ‘The History of Turkish-Islamic Science in 100 Objects’ was officially opened on TRNC Independence Day on 15 November 2021, by Ersin Tatar, the President of the Turkish Republic of North Cyprus (TRNC) and Turkish Vice-President Fuat Oktay.

The exhibition is open daily, and runs until Monday 28 February. Visitors can enter for free and explore at their leisure. Even better, ask for a free private guided tour that is available in either English or Turkish, so you can fully understand the significance of the artefacts on show.

For those not in Cyprus, you can see the exhibition via this virtual tour: evkaf.org/sergi

Title: The History of Turkish-Islamic Science in 100 Objects

Opening times: daily, Monday to Sunday, 9am to 5pm

Admission: free, no prior booking needed