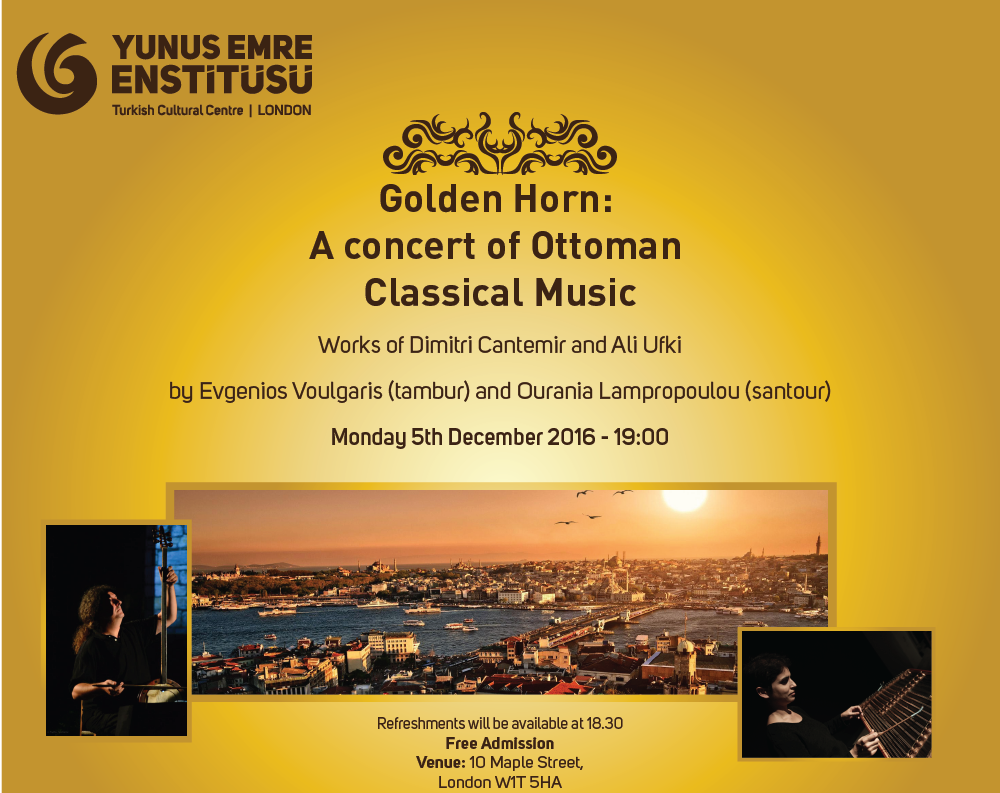 Inspired by Dimitrie Cantemir (1673-1723) and Ali Ufki (1610-1675) – two composers and collectors of Ottoman music – The Golden Horn is a modern interpretation of early Ottoman classical music.

The repertoire has been compiled by two renowned Greek musicians – Ourania Lampropoulou (santur) and Evgenios Voulgaris (yaylı tambur) – using manuscripts by Cantemir and Ufki. The duo focused on the meditative character of the music and new aesthetic implications of the makam (the system and rules for different melody types).

The duo first performed The Golden Horn in St Etienne last December. On Monday, 5th Dec., it will receive its debut UK airing when Lampropoulou and Voulgaris play an intimate concert at the Yunus Emre Institute in central London.

Voulgaris will be playing a yaylı tambur – a bowed, long-neck lute from Turkey. Derived from the older plucked tambur (also known as tanbur), the yaylı tambur is held vertically. The instrument has a long, fretted neck and a round metal or wooden soundbox, which is often covered on the front with a skin or acrylic head similar to that of a banjo.

Lampropoulou performs on the santur, a stringed percussion instrument that is part of the hammered dulcimer family. The metal strings can be plucked or struck. This traditional instrument is thought to have originated in Persia, with variations of the santur found across the world including in Greece where it is called the santouri and is slightly different in style, construction, tuning and technique.

Both artists regularly perform as soloists in Europe and Asia. They have also appeared together at multiple music venues and festivals in Greece and beyond, including in: Algiers (Algeria, Constantine), Lyon, Paris, Bourges, Marseille, Saint-Etienne (France), Brussels (Belgium) and London (Britain).

Evgenios Voulgaris’ interest in traditional music began in 1992, around the same time he completed his studies in Byzantine music. A multi-instrumentalist himself, he has repeatedly teamed with master musicians and composers in concerts, recordings and television productions in Greece and abroad. Since 1995 he has been the first mandolin in the Orchestra of Colours.

Since 2006 he has taught at the Labyrinth Musical Workshop in Crete and the Music Village, and he is often invited to deliver seminars in Greece and abroad.

As a yaylı tambur soloist he has been involved in various international projects: with Nima ben David at the Conservatoire National de Boulogne-Billancourt in Paris; Flyways, a project led by Paul Winter in New York, and The Kommeno Project led by Guenter Baby Sommer in Germany and various countries around Europe.

He has explored the sounds of rebetika in a book titled Rebetika Songs of the Inner War Period, published in 2007 by Fagotto Publications, along with two collaborative CDs, Apsilies and Psithirizontas to rebetiko. His repertoire also includes music for theatre.

Ourania Lampropoulou was born in Athens. She studied Byzantine music, piano, harmony, analysis, orchestration and orchestra conducting in Athens and Paris. Her santouri (santur) studies took the form of an apprenticeship alongside virtuoso player Tasos Diakogiorgis. She has studied musicology and anthropology of music (BA, MA) at the University of Athens and is PhD candidate in the Department of Arts (Paris 8 University).

Ourania taught santouri, music ensembles and organology at the Department of Traditional Music (Technological Educational Institute of Epirus), the Department of Music Science and Art (University of Macedonia) and at the National Conservatory in Athens. As a santouri player, she has teamed with bands of traditional and art music, as well as with symphonic orchestras and ensembles of contemporary music in Greece and abroad. She has taken part in recordings of traditional art and contemporary music, as well as in recordings for television, theatre and cinema productions.

Since 2010, Ourania has resided permanently in Paris, where she has been working on orchestrations and orchestra conducting. As a performer she teams with groups of traditional, ancient and contemporary music.