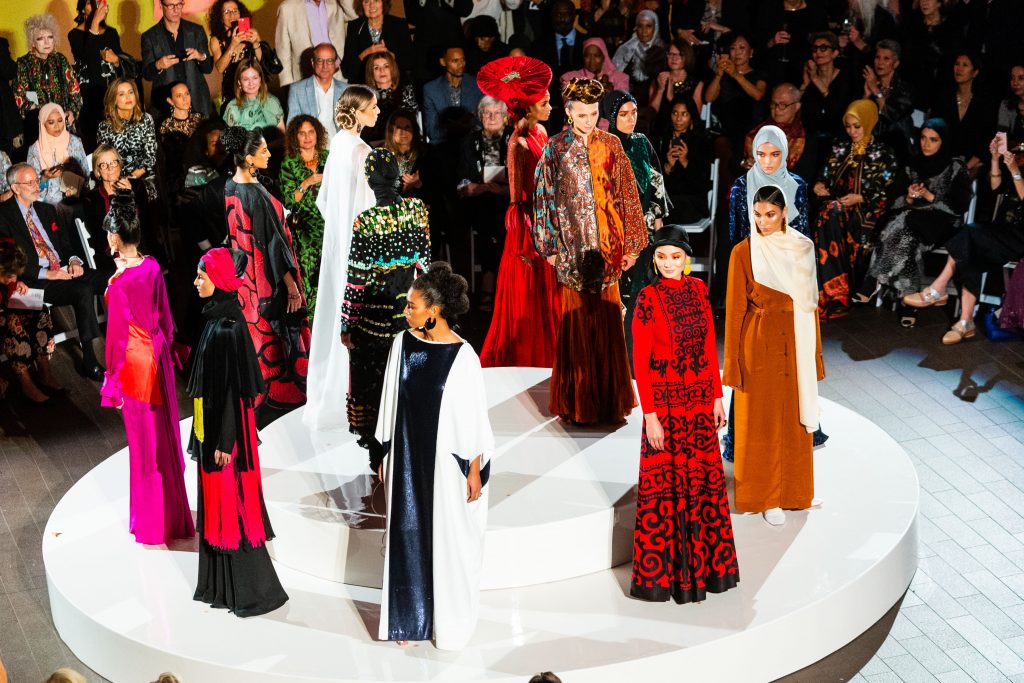 After months of negative press about the treatment of Muslims by the USA, a far more positive story has emerged about an important new exhibition on the west coast of America. Contemporary Muslim Fashions opened at de Young – Fine Arts Museums of San Francisco on 22 September. The first major museum exhibition to showcase Islamic dress, it showcases the diverse Muslim dress codes worldwide.

The exhibition runs until January 2019 and one of the main names to feature is Turkey’s Modanisa. The world’s leading modest fashion e-commerce platform has provided two outfits for display, both from its bestselling Raşit x Modanisa ‘Desert Dream’ Spring/Summer collection that launched earlier this year.

The outfits, one worn by hijabi supermodel Halima Aden as part of a special photo shoot for the museum by leading fashion photographer Sebastian Kim, have grabbed international media attention. Modanisa’s multi-coloured brown-beige-red striped dress was the lead photo in an exhibition preview story for the Wall Street Journal and also on CNN Arabic, while its black chiffon and crêpe evening gown, worn by Aden, graced the front cover of the San Francisco Chronicle’s weekend Style Magazine, and also featured in Germany’s Der Spiegel and Vogue Arabia.

The dresses were designed by Turkish Cypriot celebrity couturier Raşit Bağzıbağlı for Modanisa. A key feature of Bağzıbağlı’s capsule collection is matching headwear for the dresses, overcoming a perennial problem for hijab wearers who can seldom find bonnets and headscarves made of the same fabric and design as ready-to-wear dresses.

Two ensembles sold on Modanisa.com were also worn by models for a special catwalk show at the exhibition’s opening night: a red gown with flared skirt and black patterns and trim by Muslima Wear, and a navy animal print dress in natural fabrics by Store WF.

Modanisa CEO Kerim Ture said, “We are proud to feature in such a pioneering exhibition. From the preview photos it’s clear the de Young museum has curated an exciting collection, which will be vital viewing for anyone curious about the vibrant, diverse and rapidly growing world of modest fashion.”

He added, “It’s timely for the USA to host such a significant event. They may not be the biggest market, but American modest fashion designers and influencers are an integral part of the sector. We’ve seen that first-hand for Modanisa.com and during our Modest Fashion Weeks with American Muslim bloggers and designers instrumental in shaping global modest trends.”

Although the USA is not in the top 10 of modest fashion markets, Reuters ranks its social media commentators, including young Muslim fashion bloggers, number one in the world for the volume of posts and level of influence they have.

The modest fashion industry is estimated to be worth £44 bn annually and over the past 18 months, has catapulted into the mainstream. The interest of a major Western museum, presenting for the first time the fashion styles of Muslim women (both those who cover and those who do not) is one of the clearest indicators of this.

Modanisa.com is the highest ranked modest fashion e-tailer in the world, receiving 16 million visitors to its website each month. The Istanbul start-up launched in 2011 and has grown rapidly thanks to international demand. It currently stocks over 70,000 products from 500 fashion labels and suppliers, and ships to 130 countries across five continents, making it one of the world’s largest fashion online retailers.

The modest fashion giant is one of 53 designers, labels and retailers invited by de Young’s CEO Max Hollein to provide garments for Contemporary Muslim Fashions. The fashion portal joins designer Kuaybe Gider (also sold on Modanisa.com) as the two representatives from Turkey at the exhibition, which will travel to Frankfurt’s Museum Angewandte Kunst in March 2019.