A new film about a trio of canine outcasts gives a fascinating dog’s eye view of Istanbul as they roam freely across the city’s streets in search of food, shelter and adventure.

Shot at dog-high level, this intimate portrait allows us to explore life in Turkey’s great metropolis through the eyes and ears of Zeytin, Nazar and Kartal – the film’s stars.

With her soulful eyes and fiercely independent nature, Zeytin is the main protagonist, embarking on solitary adventures through the city at night. Nazar presents a more nurturing and protective self, easily befriending the humans around her. Kartal is a shy puppy living on a construction site, who is cared for by the site’s security guards.

Their seemingly disparate lives intersect when they from bonds with a group of young Syrian refugees, Jamil, Halil and Ali, who share the streets with them. Their adventures take us to overlooked corners of Turkish society, where intolerance and neglect rages, alongside warmth, humanity and a strong desire to survive despite the harshness of life.

The debut feature film of director Elizabeth Lo, Stray sets out to capture what it’s like “to live as a being without status or security”, offering “an unvarnished portrait of human life” and “a sensory voyage into new ways of seeing,” says the film’s press notes.

Lo travelled to Turkey in 2017 and the film seems to have presented itself to her there after a chance encounter with Zeytin.

For years, Turks had captured and put down stray dogs, but after sustained protests, the law was changed making it illegal to euthanise or keep captive stray dogs. For Lo, these free-roaming dogs are an “emblem of resistance” and “living manifestations of compassion in the face of intolerance.”

Reflecting on the connection formed between the stray dogs and three young Syrians, Lo said:

“The warmth and love emanating from their interdependent bond was deeply moving to me. Without the companionship of the dogs, the Syrian boys would have felt adrift in a city not their own —and perhaps it was the same for Zeytin and Nazar.” 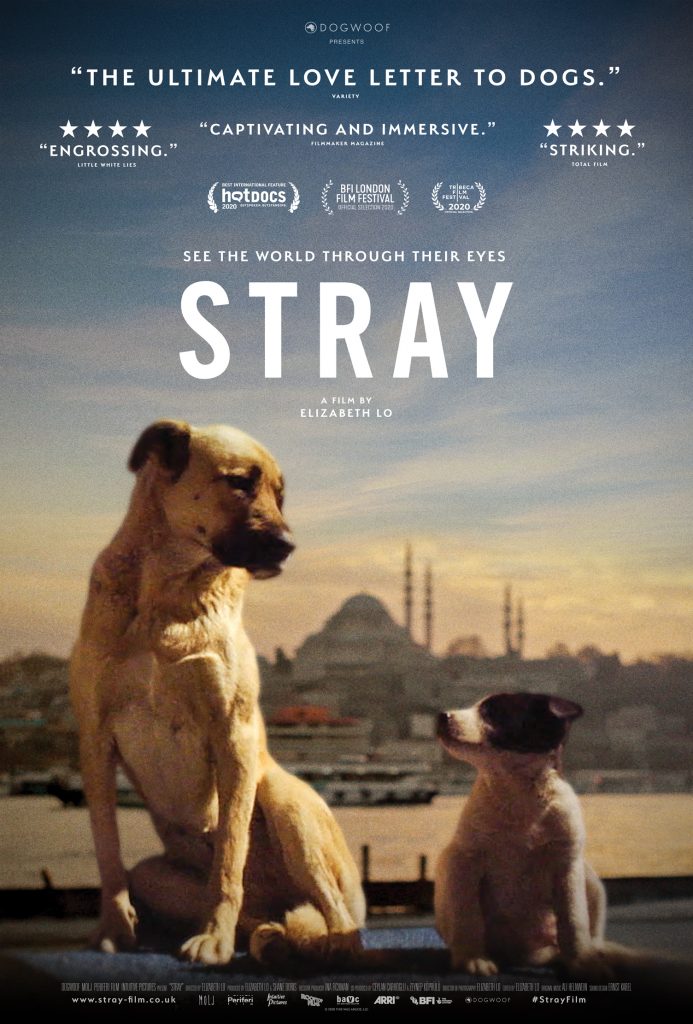 Lo and her film crew used pet-tracking GPS collars on Zeytin or Nazar to be able to locate them, but quickly realised it was “impossible” to plan or schedule filming shoots when dealing with such unpredictable subjects. Lo and her producer Shane Boris decided it would be easier to leave the “film’s narrative up to dogs.”

Through Stray, the director seeks to “push the boundaries of the cinematic medium”, creating a non-human centric view of the world. Philosophically, Lo hopes the film will expand viewers’ “circles of moral and perceptual consideration beyond their own class, culture, and species,” as it poses a series of difficult questions, not least “what it means that our streets are continuously emptied of everyone except those whom we’ve deemed to be its legitimate citizens.”

A visual feast, Stray hopes to do for dogs and Istanbul what Ceyda Torun’s brilliant movie Kedi (2016) did for cats in the city.

Stray is released across Britain on Friday, 26 March, available to watch in virtual cinemas and on demand.