Pope Francis and President Erdoğan discuss Jerusalem at the Vatican 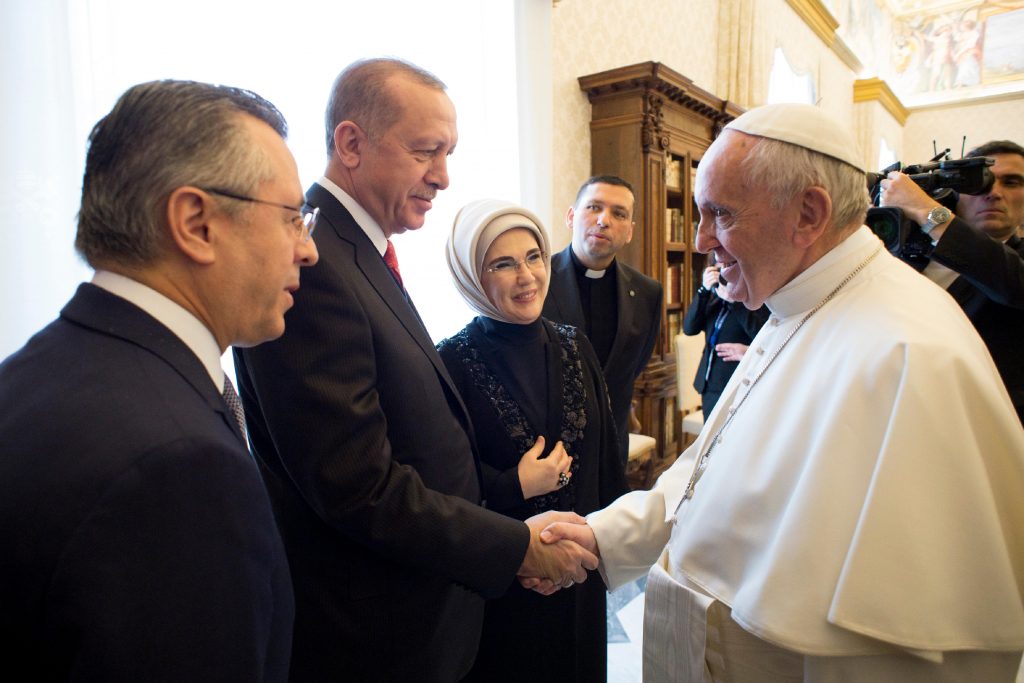 Turkish President Recep Tayyip Erdoğan discussed Jerusalem with Pope Francis on Monday amid the continuing upheaval caused by the US’s recognition of the city as the Israeli capital last year. President Erdoğan, who became the first Turkish head of state to visit the Vatican in almost 60 years, had a fifty minute meeting with the pontiff in the frescoed study at the Roman Catholic leader’s Apostolic Palace.

The visit followed the 2014 papal trip to Turkey during which Pope Francis visited historical sites of religious significance to both Islam and Christianity including the Hagia Sophia museum, which served as a church before being converted into a mosque by the Ottomans after they conquered Istanbul (then Constantinople) in 1453.

Talks between the two leaders included “the status of Jerusalem,” Reuters reported quoting a Vatican statement, and stressed “the need to promote peace and stability in the region (Middle East) through dialogue and negotiation, with respect for human rights and international law.”

Pope Francis presented President Erdoğan with a bronze medallion made by Italian artist Guido Verol depicting an angel embracing the world’s northern and southern hemispheres while overcoming a dragon. “This is the angel of peace who strangles the demon of war,” said the pontiff, adding that “[It is] a symbol of a world based on peace and justice.”

The pope’s comments come as the Turkish military engages Kurdish militants in Afrin, northern Syria, who are allied to terror group the PKK.

The president and pope continue to jointly oppose American policy towards Jerusalem, which is sacred in Islam, Judaism and Christianity.

“Jerusalem is a central issue for both Muslims and Christians, both the pope and myself are committed to protecting the status quo,” President Erdoğan said in an interview published on Sunday ahead of the meeting by the Italian newspaper La Stampa. The pair also agreed that Jerusalem’s situation should remain unchanged during a phone conversation last December after US President Donald Trump recognised the city as the capital of Israel and announced that Washington would move its embassy there from Tel Aviv.

Turkey and the Vatican favour a two-state solution to the Israel-Palestine conflict, with the Vatican supporting a final status for Jerusalem agreed by both sides as part of the peace process and Turkey spearheading diplomatic moves in support of Palestine among Muslim-majority countries.

In December, President Erdoğan called an emergency meeting of the Organisation of Islamic Cooperation (OIC) in Istanbul. The summit concluded with a declaration condemning the Trump Administration’s actions and recognising East Jerusalem as the capital of Palestine. The move was endorsed by all 57 OIC member states including countries such as Jordan, Egypt, Pakistan, Malaysia, Indonesia and Azerbaijan.

Alongside his meeting at the Vatican, President Recep Tayyip Erdoğan’s whirlwind visit to Europe included a stopover in Paris to meet with French President Emmanuel Macron and a meeting with Italian President Sergio Mattarella in Rome.