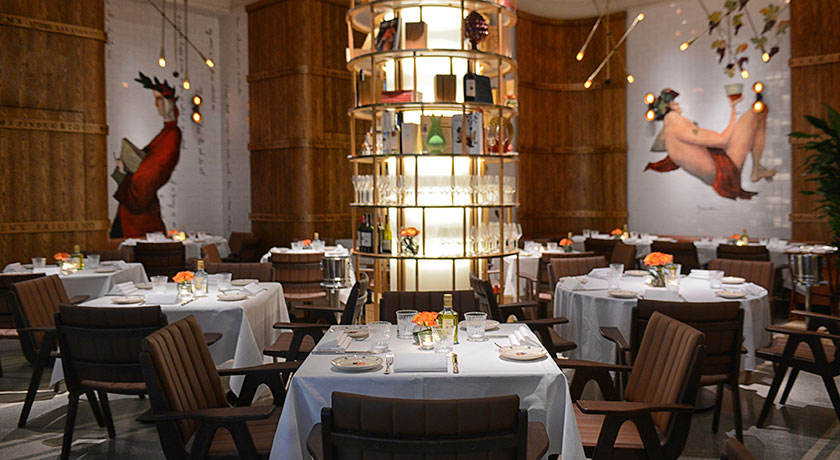 Despite a location with almost no passing footfall and having only been open for two weeks, Frescobaldi was almost full the Saturday lunch time I visited. To launch this first independent UK site, the people behind the centuries-old wine dynasty – Frescobaldi Vini – have partnered with Good Food Society, a new hospitality venture promoted by Levent Büyükuğur.

With its striking frescoes of Italian renaissance characters, a great central column with shelves housing Tuscan paraphernalia, and a fully glass frontage, the space is both handsome and welcoming.

The wide ribbons of pappardelle with the veal cheek ragu were gorgeous – great bite and deep yellow. The ossobucco was a loaded plate of flaking veal, flanked by a bank of creamy white polenta, and with a great slug of marrow that slipped out of the bone after just a little persuasion.

Tiramisu came in a mound of yellow sponge – coloured from extra yolk, I presume – with a moat of coffee sauce and bitter toasted beans. It was cleared in the same amount of time it took me to register it had arrived.

Small and reasonably priced pre-grouped wine flights are available: you get a taste of three glasses (125ml each), and there are different groups of three to choose from, ranging from £16 – £68.

I don’t know how my fellow diners knew Frescobaldi was there. But know about it, they did. And now you do too. frescobaldirestaurants.com