Get away to the Çanakkale Peninsula 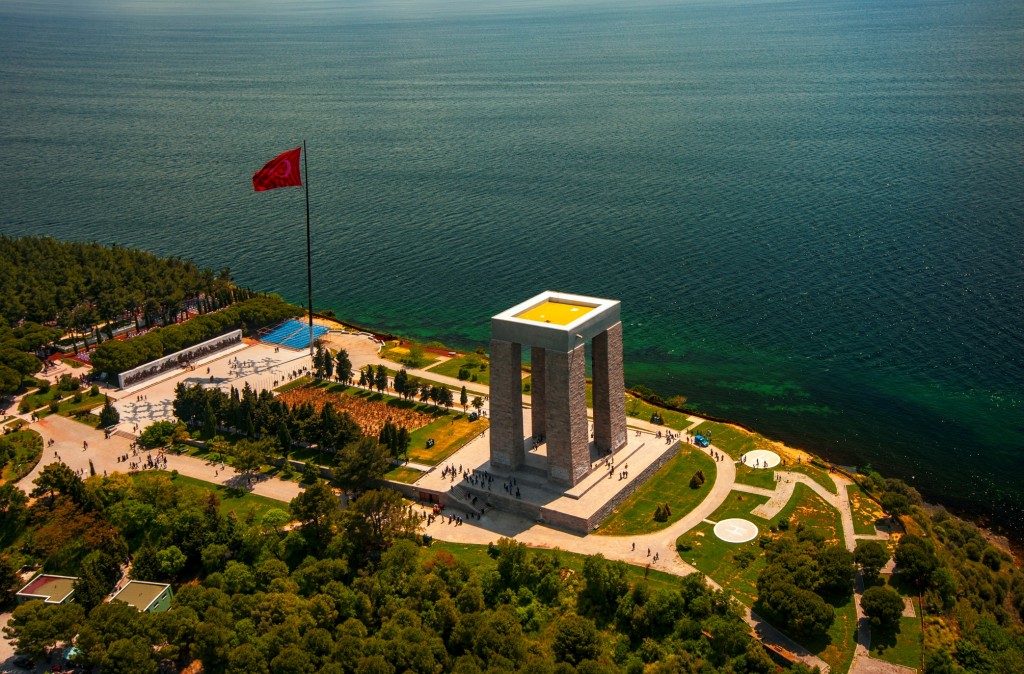 Visiting the Gallipoli battlefields during this centenary year is certainly one the major reasons to travel to the southwest coast of Turkey, but that’s not all the Çanakkale district has to offer. From its charming old city centre to the resplendent ruins of ancient Troy, travellers can sample the best of classic and contemporary history, while also enjoying a dip in the Aegean Sea.

Situated between the Dardanelles and the Aegean Sea, the natural beauty and tranquil nature of today’sGallipoli Peninsula makes it difficult to imagine the calamitous war that occurred here one hundred years ago. The area is now protected as a national park and has become a place of pilgrimage for Turks and foreigners alike who come to pay homage to the bravery and camaraderie of the soldiers who fought and died here.

There are multiple cemeteries and memorials for both Turkish and Allied soldiers. The easiest way to see them all is by car. The roads are well-maintained and signposted. Those happier on foot, but short on time can do the ‘Anzac Walk’ – a one-day trek that starts at North Beach and snakes through the various battle sites on the Peninsula. It includes a visit to Anzac Cove, where the Allies first landed on 25 April 1915 and which formed the military base for Australian and New Zealand troops during the eight-month campaign.

In nearby Arı Burnu, you can find the monolith that is inscribed with the famous words by Mustafa Kemal Atatürk to the first Australians, New Zealanders and British to visit the Gallipoli battlefields in 1934. The site and North Beach now form part of the annual Dawn Service that takes place every 25th April.

The Çanakkale Martyrs Memorial (main picture) is located on Hisarlık Hill in Morto Bay at the southern end of the Peninsula. Measuring 41.7 m (137 ft) high, this huge monument, in the form of four square columns with a thick concrete crown, is visible from the Dardanelles. Underneath the memorial is the War Museum, which includes displays of original personal and military items, such as cutlery, a set of false teeth, belt buckles, sniper shields, and photographs found on the battlefield.

Other notable monuments include the Cape Helles Memorial to the Missing, a towering stone obelisk whose square base walls bear the names of the 20,673 British and Commonwealth servicemen who lost their lives nearby but for whom no grave exists. The 57th Infantry Regiment Memorial, which was unveiled in 1992, is dedicated to the Turkish troops who died defending the cove when the Allies landed in April 1915. Every man in the regiment was killed fulfilling the command of Lieutenant-Colonel Mustafa Kemal, who said: “I do not order you to attack, I order you to die. In the time which passes until we die other troops and commanders can take our place.”

A modern addition for military historians is the Gallipoli Simulation Centre (Çanakkale Destanı Tanıtım Merkezi), just east of the village of Kabatepe and a short drive along the coastal road from Anzac Cove. Here, visitors can embark on a 2-hour long, 3D-journey through the Gallipoli naval and land campaigns that are displayed in 11 hi-tech galleries, which alternate between the Turkish and Allied experiences.

Written about by Homer in his epic poem Iliad and the focus of many a Hollywood film, Troy (Truva in Turkish) is a land of ancient wars and legends, making it a must-see destination for any visitor to the region.

A 40-minute drive from Çanakkale, Troy is situated on the Biga Peninsula, on the slopes of Kaz Dağı (also known as Mount Ida), close to Edremit. Since being founded in 3000 BC, it has survived numerous attacks by local and foreign powers keen to capture this strategic town that overlooks the vital Dardenelles Straits, which divide Europe from Asia. Today it is a protected World Heritage site due to the extensive archaeological excavations, including Troy’s ancient city walls, the ancient town of Assos where Aristotle once lived, and a holy site in Gülpınar where stand the impressive ruins of Apollo Smintheus Temple, which is also referred to in the Iliad.

A myriad mythical stories revolve around Troy. The most famous concerns the world’s first beauty contest: at a party thrown by Zeus, three goddesses – Hera, Athena and Aphrodite – seek to claim a golden apple from the Garden of Hesperides inscribed with the words ‘for the fairest one’. Unwilling to make a choice between the three, Zeus asks Paris, son of Trojan King Priam, to decide instead. Paris chooses Aphrodite, who rewards him with the most beautiful woman in the world, Helen, the wife of the Greek Spartan king Menelaus, whom he promptly abducts.

The wrath of the Greeks triggered a 10-year war with Troy. They finally broke through with a cunning plan that involved the construction of a giant wooden horse in which they hid a crack squad. The Greeks pretended to give up the fight by sailing away, abandoning their horse, which the Trojans brought into their city as a victory trophy. That night the Greek army sailed back under cover of darkness and entered the city after their soldiers had crept out of the horse and opened the city gates. Troy, said to be one of the most advanced cities of its age, was totally destroyed.

Written in his hometown of Izmir, Homer’s dramatic words not only immortalised the memory of the Trojan War, believed to have taken place around 1200 BC, but also inspired Hollywood. Two of its best known films are Helen of Troy (1956), and Troy (2004), the latter starring Brad Pitt and Eric Bana. You can see the giant wooden horse from the 2004 film in Çanakkale city centre.

Once famed for its ceramic products under the Ottomans, Çanakkale now operates as a marina for tourists and a small, but busy port for trade. It is home to some 200,000 inhabitants including students at the local university. The old town maintains its charm with its narrow, cobbled streets and Ottoman-era town houses. Its waterside promenade and nearby wharf remain lively all year round with numerous cultural events.

City landmarks include the five-storey Ottoman Clock Tower (pictured), paid for by an Italian merchant in his will, the local Kent Museum charting the history of Çanakkale since Ottoman times, and the Korfmann Library, housed in a 19th-century former school in the old town opposite the Tifli Mosque. It was the bequest of the late Manfred Osman Korfmann (1945–2005), a former archaeological director at Troy, and contains 6,000 volumes on history, culture, art and archaeology.

It may not be in Turkey’s top 10 beach holiday destinations, but the Peninsula does offer plenty of tranquil coves that are ideal for those after some sea and sun. It pays to get away from the city centre, where the sea is often polluted. A 60 km drive from the city brings you to Bozcaada – a small island off the mainland that is accessible by car ferry. Its Habbele Beach boasts clear blue water, and the islanders are renowned for their fishing and the production of good local wines.

Or embark on a boat from the city centre and glide across the Dardanelles to Zargana Beach, located in the foothills of Kilitbahir (meaning ‘lock of the sea’) Fortress. The local village provides all the amenities you would need for a short stay. Further up on the same stretch of coast is Kabatepe Kumsalı, which has a lovely campsite in a forest – the perfect shaded backdrop for sunny days on the adjoining sandy beach with its crisp blue sea. Best avoided during the peak season of July and August.

With Pegasus Airlines: London to Balikesir/Edremit airport, then a 1.5 hours drive to Çanakkale, £119 one way.

Travel from Istanbul by coach (6 hrs), or fly to Çanakkale airport, or take a ferry boat from Yenikapı to Bandırma, and complete the journey by bus (just over 4 hrs).