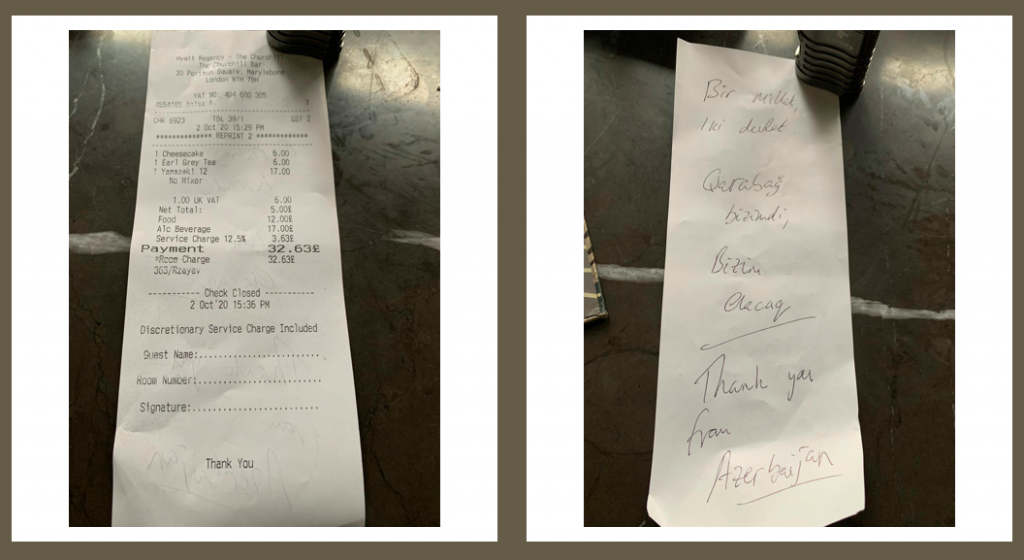 A London businessman received a nice surprise when he went to pay the bill at a hotel bar and found that a stranger had already paid it.

On Friday afternoon Nural Ezel went to the Hyatt Regency – The Churchill Hotel in central London to meet a friend visiting from Istanbul. Catching up on each other’s lives, the conversation between the two men soon turned to current affairs.

“We were talking in Turkish. We discussed the war in Azerbaijan, the crisis in the Eastern Mediterranean and Cyprus, and the candidates in the upcoming TRNC Presidential election,” Mr Ezel told T-VINE.

The two men ordered a cheesecake, Earl Grey tea and Yamazaki 12 Japanese whisky. When Mr Ezel asked for the bill, the waiter informed him it had already been paid.

The waiter brought Mr Ezel the receipt for the payment of £32.63, which included a handwritten message in Azeri Turkish on the back:

“ Bir millet, iki devlet. Qarabağ bizimdi, Bizim olacaq! [One nation two states. Karabakh was ours. It will be ours!] Thank you from Azerbaijan”.

The North London-based Turkish Cypriot entrepreneur and owner of Olay newspaper was stunned by the kindness of a complete stranger and the warm message on the back.

“I can’t tell you how very proud and emotional I felt at that moment. It made my hairs stand on end. To be in London and experience such strong brotherly love between our nations, especially at this difficult time for Azerbaijan,” Mr Ezel added.

Mr Ezel said of the stranger: “I noticed a man sitting on his own at a neighbouring table. He looked in his forties and was smoking a cigar. We didn’t speak, and sadly I don’t know who he is to thank him.

“I asked the hotel staff for his details afterwards and while they confirmed the man is a guest at the hotel, they didn’t give me his name.”

The Azerbaijan-Armenian conflict and Turkey

Last weekend, fighting erupted between Armenia and Azerbaijan. The Azerbaijan army went on the offensive after the country’s Tovuz region came under fire from Armenian forces. The incident follows months of tension and small-scale skirmishes between the two sides.

This simmering conflict in the Caucasus region centres on the Nagorno-Karabakh region, which is internationally recognised as part of Azerbaijan, but which has been under occupation by Armenia since 1991.

A war broke out between the two former Soviet Union republics in the late 80s and ran until a ceasefire was called in 1994. By that time tens of thousands had been killed and over a million people displaced.

The United Nations Security Council (UNSC) has repeatedly ordered Yerevan to withdraw from Nagorno-Karabakh, but the Armenian government refuses to comply.

In 1992, the OSCE Minsk Group was formed to resolve the dispute, but it too has been ineffective. The organisation is led by France, USA and Russia, which Baku accuses of bias due to their large Armenian diasporas.

Soldiers shake hands in front of a Turkish and an Azerbaijani flag during joint exercises between Turkish, Azerbaijani forces in Perekeshkul, Azerbaijan on August 13, 2020

In 2015, Azay Guliyev, an Azerbaijani member of parliament, proposed that permanent group members Turkey and Germany are upgraded as co-chairs of the Minsk Group to inject much-needed balance, but that too has been resisted.

“The brotherly state of Azerbaijan has started a great operation both to defend its own territories and to liberate the occupied Karabakh.

“Turkey stands with and will continue to stand with friendly and brotherly Azerbaijan with all our means and all our heart,” the Turkish president said.