The question teenager Arda Ayten answered correctly to win Turkey’s Who Wants to be A Millionaire? 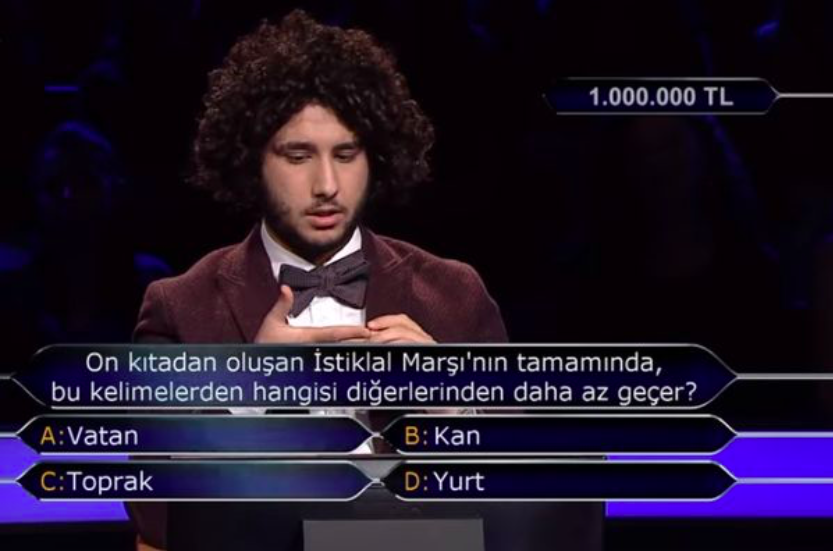 A UNIVERSITY student has come away with the top prize on ‘Kim Milyoner Olmak İster?’ [Who Wants to be A Millionaire?]. Arda Ayten answered a question on Turkey’s national anthem correctly to win 1 million Turkish lira on Friday night, 5 October.

Viewers had been left hanging from the last series about whether nineteen-year-old Arda Ayten would succeed. He had managed to sail through all eleven questions leading up to the final round, but ran out of time to take his final question on the final programme of the last series, which is broadcast on ATV.

Arda came on to the first show of the new season that aired on Friday evening, facing new programme host, actor Kenan İmirzalıoğlu.

The million-lira question was as follows:

Which of these words features the least frequently across all ten verses of (Turkey’s National Anthem) İstiklal Marşı?

The correct answer was C, Toprak.

Arda tried to count the words as he recited the national anthem before offering his answer. He expressed some self-doubt as he waited to hear if he’d won, with İmirzalıoğlu asking him had he been “hasty with his answer”.

When the green light finally flashed, denoting he had given the right answer, the teenager was visibly emotional. He hugged İmirzalıoğlu as the audience, which included his mother and maternal grandmother, cheered on loudly. The two women then came to embrace Arda too.

Who is Arda Ayten?

Viewers had taken Arda to heart not only for his intelligence, but also after he revealed his difficult upbringing. His parents had split up when he was just four, and his father had never enquired after him or offered any support since that time.

Originating from Hatay but with Cypriot roots through his grandparents Cihan-Cemal Özaslan, who are from Piskobu village near Limassol, the Kahramanmaraş Sütçü İmam University medical student said he loves books and had read over one hundred this past year. He would have liked to have read more, but his financial circumstances meant he could not afford them.

Arda announced he plans to spend his winnings on buying on thousands of books and to carry on  being a student for the rest of this life.