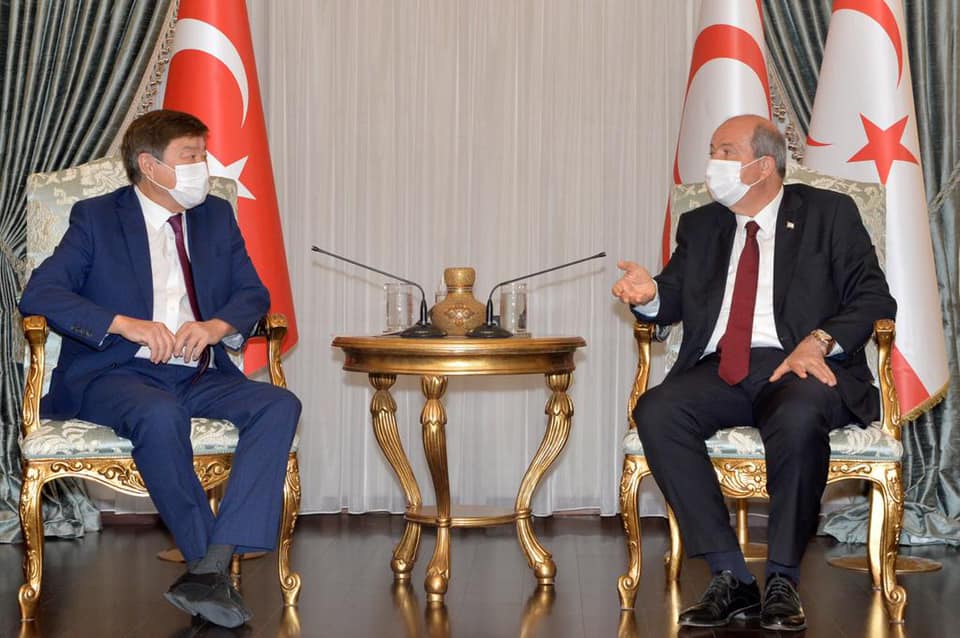 A delegation from Azerbaijan’s Parliament made history by visiting the Turkish Republic of Northern Cyprus (TRNC) for the very first time on Friday.

The trip started with a visit to the TRNC White House to meet President Tatar, who said that Turkey, Azerbaijan and the TRNC were “one nation, three states” that are “all of Turkish descent”.

The Turkish Cypriot leader highlighted the fact that many successful Azerbaijanis live in the TRNC, while conveying his gratitude and love to the people of Azerbaijan, President Ilham Aliyev and the MPs.

Mr Seyidov, who chairs Azerbaijan’s Parliamentary Foreign Affairs Committee, said: “Turkey’s power is the power of Azerbaijan. It is the power of the TRNC,” as he wished the TRNC gains strength and unite with the Turkish world.

Receiving the delegation ahead of the TRNC’s annual 20 July Peace and Freedom Day, Speaker Sennaroğlu said: ​”The presence of the Azerbaijani delegation among us on the 47th anniversary of the freedom and well-being of the Turkish Cypriot people is a strong message to the international community.

Mr Seyidov told the TRNC Speaker: “Our presence here shows everyone that the Turkish Cypriot people are not alone and that the double standards we have been subjected to for decades cannot continue.”

The senior Azerbaijan MP said that official and institutional relations will be established between the two countries’ parliaments, and that their visit to the TRNC is the first step in that regard.

TRNC PM Saner said: “I sincerely thank you for being with us and supporting us in our national cause.”

Mr Seyidov replied by stating that Azerbaijan will defend the rights of the TRNC at the European Council. He also emphasised that when it comes to the Cyprus issue and Turkish Cypriot rights, there is no distinction between the views of the government and opposition in Azerbaijan.

The delegation’s trip to Lefkoşa came after a visit to Ankara, which enjoys strong ties with Baku.

Turkey played a pivotal part in last year’s conflict over the Nagora-Karabakh region, helping Azerbaijan to liberate a large part of its territory from Armenian occupation.

At present Azerbaijan does not recognise the TRNC, but unofficial relations exist and economic activity and cultural relations between the two Turkic countries continues to grow.

The visit of the Azerbaijan Parliament delegation to North Cyprus follows one by a Pakistani consular team. Pakistan’s Embassy in Turkey ruffled feathers by announcing the visit on social media and calling the TRNC by its official name.