“They see us as terrorists”: Turkish Cypriot guest shocked by comments on Cyprus Independence Day 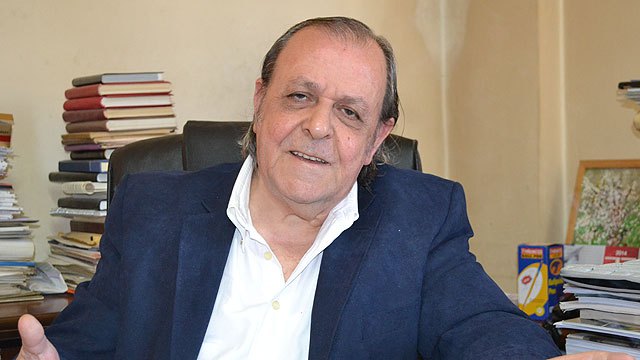 A North Cyprus newspaper editor invited to speak at a Cyprus Independence Day reception has relayed his shock and dismay at the language used to describe Turkish Cypriots. Şener Levent, editor-in-chief of Afrika newspaper and one of the leading proponents of a united Cyprus, said the resistance of Turkish Cypriots to ENOSIS was described as a “Turkish insurgency”.

Levent had been invited to speak at an official event commemorating the 56th anniversary of the Republic of Cyprus, which is celebrated annually on 1st October. Also present were the leaders of several South Cyprus opposition parties: DIKO, EDEK, Citizens Alliance, and the Greens. The event started with a film about the Republic where Turkish Cypriots were portrayed as terrorists that rose up against the state, which failed to mention efforts to deprive them of their political equality and the brutal attacks they faced at the hands of Greek Cypriots when the conflict broke out in December 1963 – three years after the Republic was founded.

Detailing his experience in his Afrika column titled “Bizi terörist olarak görüyorlar” (‘They see us as terrorists’), which has been reprinted in many other Turkish Cypriot media, Levent explained that he was one of “a few Turks” in the room who all “froze with shock” after watching the film. They could not believe Turkish Cypriots were “still seen as terrorists”, which he condemned: “Gentlemen, it will not do, it will not do at all!”

“On the day they were meant to be celebrating Cyprus’ independence, everyone was singing the national anthem of Greece”

He found it even more bizarre that on the day when they were meant to be celebrating the Republic of Cyprus’ independence, everyone in the room was upstanding to sing the national anthem of Greece. In his column, Levent asked, “Don’t you have your own national anthem you poor republic?

Levent was also critical of the Greek Cypriot press for failing to cover his comments on ENOSIS – the attempt by Greek Cypriots to unite Cyprus to Greece and turn it into a Greek island.

“We will never accept a bi-zonal solution”!

Another disappointment for Levent was the staunch opposition of the opposition party leaders to a biz-zonal, bi-communal federal solution based on the political equality of the two sides: this political framework is the basis upon which the talks to unite Cyprus have taken place since the late 1970s.

Three of the four party leaders – DIKO, Citizens Alliance, and the Greens – attended the Independence Day dinner, where Levent asked them:

“Supposing Turkey gave up its guarantor role [of Cyprus], all Turkish troops were withdrawn from the island. Omorfo [Güzelyurt] and Maraş [Varosha] along with other villages were returned [to Greek Cypriot control]…and the Turkish side gave up on the rotating Presidency system…under these circumstances, would you agree to a bi-zonal, bi-communal federal solution?”

“I was astonished by their response: all of them said they ‘would not accept’…They told me they would never say ‘yes’ to a solution where the Republic of Cyprus doesn’t continue [as it is] or one which includes a bi-zonal element.”

Levent said he had been mistaken that the Greek Cypriots’ primary concern had been Turkey and the Turkish forces on the island, which he – like Greek Cypriots – view as an “occupation.” He was “wrong” he concluded.

The hard-line views of the Greek Cypriot opposition leaders are matched by the obstinacy of Archbishop Chrysostomos II. The leader of the Orthodox Church in Cyprus again waded into Cyprus politics on Sunday by publicly speaking out against the political equality of the two sides.

Using population statistics that are over 40 years old, the Archbishop claimed Turkish Cypriots make up just “18% of the population”, while Greek Cypriots are “82%”. As such, sharing power with a minority and having a ‘rotating presidency’ was neither viable nor fair.

“They should not insist on the rotating presidency, unless they can prove to us there is a country where 18% of the population elects the President of the country. Then we will go and vote for (Turkish Cypriot leader Mustafa) Akinci to become the President of the Republic of Cyprus,” the Archbishop said.

His comments conveniently side-stepped the fact that population numbers do not determine the voting rights and powers of constituent states in the European Union, of which Cyprus is a member. Eastern Mediterranean island’s combined population of 1 million people makes up just 0.2% of the EU’s total population of 510 million, yet Cyprus has the same veto powers as much larger nations such as Germany, France and Britain.