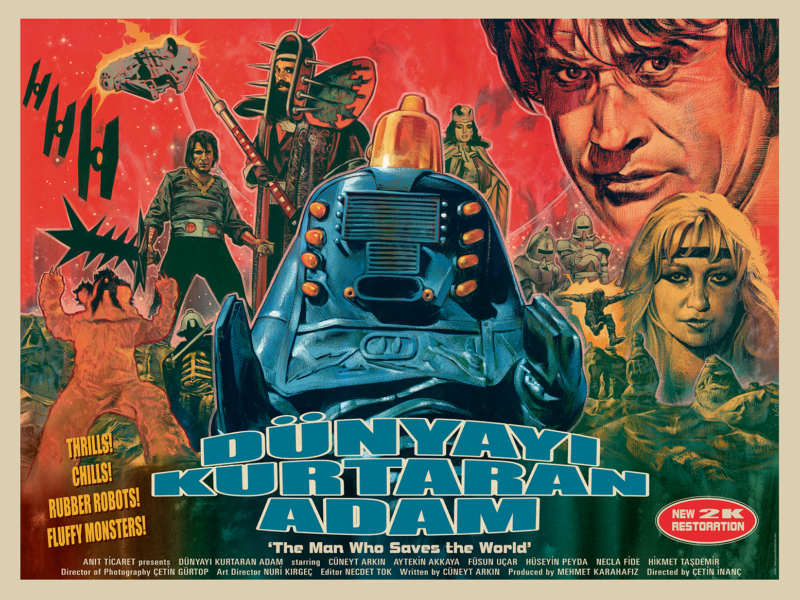 This Friday, the brand new 2K scan of the 1982 Turkish cult film The Man Who Saves the World, best known to fans as the Turkish Star Wars, is set to have its world premiere simultaneously at The Cinema Museum in London and the CCA in Glasgow. Friday, May 4 is officially Star Wars Day and tickets to both events have already sold out.

Starring Cüneyt Arkin, The Man Who Saves the World is notorious for the ways in which director Çetin İnanç edited stolen footage from Star Wars (1977) into his own film, along with music from Raiders of the Lost Ark, Flash Gordon, and numerous others. Low-resolution and poorly-subtitled bootleg copies of the film have circulated for years, leading to its reputation as one of the worst movies ever made.

In 2016, film historian Ed Glaser rescued the sole surviving 35mm print of the film after it was discovered in the collection of a retired movie projectionist in North West Turkey. Now, digital remastering of the film has reconstructed missing sections and restored faded colour, allowing the world to finally see the film the way it was intended.

The story of The Man Who Saves the World revolves around two Turkish space pilots who crash-land on a desert planet enslaved by an evil wizard. Memorable sequences involve the heroes battling robots inspired by Battlestar Galactica and Forbidden Planet — plus mummies, skeletons, and multi-coloured yetis. Another sees them in starfighter “cockpits,” wearing motorcycle helmets, as footage from the Star Wars Death Star battle is projected behind them.

The Remakesploitation Film Club is presenting the London event. Its programmer Dr Iain Robert Smith says: “This is an incredible opportunity to see the world premiere of the 2K version of Turkish Star Wars. This film is the holy grail of remakesploitation cinema and after many years of watching dodgy bootleg copies of the film, it is truly a revelation to finally see it in HD.”

The London event will include a live Q&A with Glaser who is flying over from the US especially for this screening. A long-time fan of the film, Glaser also produced the English-language DVD release of a Turkish remake of Rambo and is the host of the award-winning web series Deja View. The Q&A session will also include Pınar Öğünç, the niece of director Çetin İnanç and author of his biography.