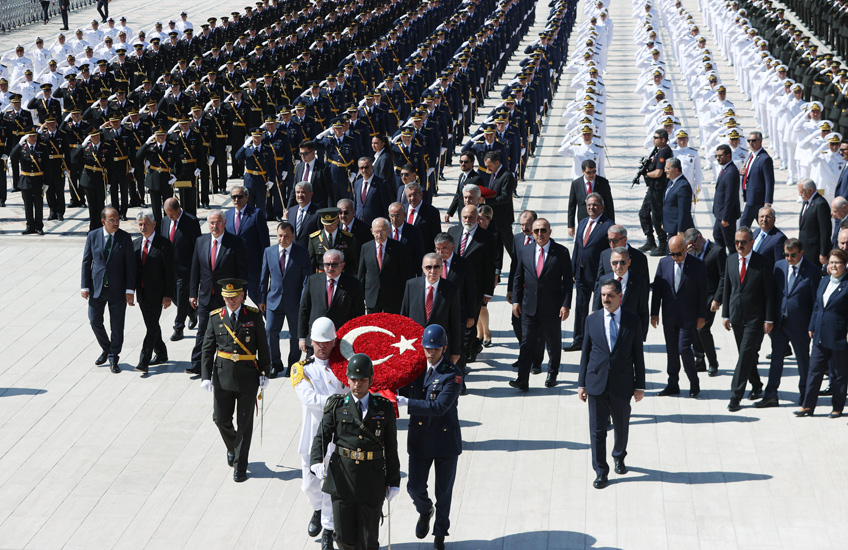 On Tuesday, Turks around the world celebrated the hundredth anniversary of the end of the War of Independence, when Anatolians successfully liberated their country from multiple invading forces.

From military parades to music concerts, and fashion shows to tennis tournaments, there were joyful scenes in the capital Ankara, and across Turkiye, as well as in North Cyprus and internationally as members of the Turkish diaspora joined Turkish diplomats in embassies to commemorate this key date in Turkish history.

The Turkish President Recep Tayyip Erdoğan attended a number of events during the day to mark Victory Day, known as Zafer Bayramı in Turkish, which started with a wreath-laying ceremony at Anıtkabir (Atatürk’s mausoleum) and also at the nearby state cemetery in Ankara.

In his address to the nation, President Erdoğan said: “With the Great Victory, it has been registered once again that the lands on which we live freely today are our eternal homeland.” The president also wrote a tribute to the founding father of Turkiye in Anıtkabir’s memorial book:

“On the 100th anniversary of the Great Victory, one of the greatest milestones in our glorious history, we remember with grace, you, your brothers-in-arms, the distinguished members of our Grand National Assembly, and our gallant martyrs.

“Inspired by our brave veterans, we continue to advance the Republic of Türkiye in line with the goals you set for us, and to strengthen it in every field, economy, defence and diplomacy in particular.

“Our country, which has outstandingly dealt with the global crisis of the pandemic, is successfully managing the crises in its region, and making diplomatic moves, which are praised by the entire world, for the restoration of peace and stability.

“Neither the plots by the invaders nor the attacks by bloodthirsty terrorist organisations will be able to prevent the building of a growing and strengthening Türkiye, which is the hope of the oppressed, as well as its own citizens with high self-esteem. Rest in peace!”

After saluting soldiers on parade in the Turkish Republic of North Cyprus, where Turkish Victory Day is also a public holiday, President Ersin Tatar tweeted in Turkish:

“On the 100th anniversary of the Great Victory, we celebrated the August 30 Victory Day in TRNC with great enthusiasm. Happy holiday. I commemorate the Great Leader Mustafa Kemal Atatürk and his comrades in arms with mercy, and [remember] all our veterans who passed away with gratitude.”

In London, in the absence of Turkish Ambassador Ümit Yalçın, the Acting Charge d’Affaires Güneş Yeşildağ and Turkish Armed Forces Attaché Colonel Ömür Candar welcomed guests to the ambassador’s residence. The reception started with the singing of the National Anthem, followed by a moment of silence.

Members of the Turkish diaspora in London voiced their disappointment on social media that the occasion had not included a bigger, more public facing event.

Winning the War of Independence in 1922

A public holiday since 1926, Zafer Bayramı occurs annually on 30 August – the day in 1922 when Turkish forces comprehensively beat their Greek counterparts at the Battle of Dumlupınar, near Kütahya, located in western Turkiye.

The four day battle at Dumlupınar was the culmination of the Greco-Turkish War on the western front, which in turn was part of the three year War of Independence that had commenced on 19 May 1919.

Over 30,000 Greeks had assembled for the battle back in August 1922, but the men were low on morale having suffered a series of bruising defeats at the hands of the Turks.

Suffering from disorganisation, fatigue and desertion, and with two of the allied powers, Italy and France, deciding to step away from further conflict with the Turks, Greece found itself unable to continue its military offensive.

The recapture of Izmir by the Turks on 8 September spelt the end of the campaign. The last Greek troops left Anatolia on 18 September 2022 – less than three weeks after losing at Dumlupınar.

Against the odds, the rump of the Ottoman Empire had not only survived huge military assaults by the pro-Greek British, French, Italian, Greek and Armenian forces, but also managed to expel them from their territory.

The Turks had fought for eight long years, starting with the First World War that had led to the total collapse of the Ottoman Empire.

The decisive victory at the Battle of Dumlupınar paved the way for the allied powers to sign the Armistice of Mudanya with the Turkish Grand Assembly in October 1922, and why 30 August is Victory Day in Turkiye, and celebrated each year.