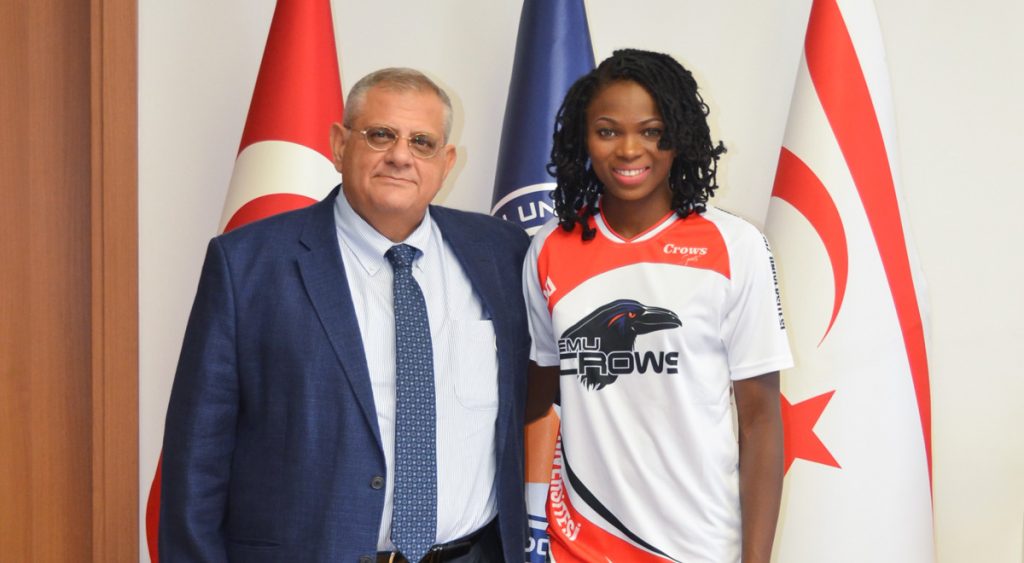 There was delight in North Cyprus and Nigeria after Ese Brume won a bronze medal in the Women’s Long Jump at the Tokyo Summer Olympic Games on Tuesday.

The Eastern Mediterranean University (EMU) student claimed third place with a jump of 6.97m – and Nigeria’s first medal of the 2020 Tokyo Games.

Her Famagusta-based university were among the first to congratulate the 25-year-old tourism and hospitality postgrad student, posting a message on their Facebook page.

“EMU Student Ese Brume has won Nigeria’s first medal at the 2020 Tokyo Olympics. Congratulations Ese, We are proud of you as EMU Family,” wrote EMU in English and Turkish. The post has since been shared over 115 times.

“It is every athlete’s dream to participate in the Olympics. Despite her young age, Ese participated in her second Olympics and made history by winning the bronze medal in the Long Jump at the Tokyo 2020 Olympics.

“For the first time, an EMU Athlete has won an Olympic medal. We are proud of that. It is a privilege to be a member of EMU.”

“Congratulations to Eastern Mediterranean University student Ese Brume for winning a bronze Olympic medal in the Women’s Long Jump. Like Nigeria, North Cyprus is also very proud of you Ese!”

In-form Brume set the standard in the women’s competition, leaping to 6.97m with the first of her six jumps in the final. She was pipped to the silver medal by Brittney Reese, who tied with the Nigerian athlete on the longest jump, but the American had a longer second best jump.

Germany’s Malaika Mihambo won gold with her final jump of the competition, landing on 7m. The distance was some way off record standard – 40cm down on the Olympic record and 52cm less than the world record – but in a thrilling competition, where the lead changed multiple times, the distance mattered less than becoming Olympic champion.

There was huge excitement for Brume too, who secured Nigeria’s first medal of the Tokyo Games. Her podium placement reflects a consistency of performance at the highest level – Brume has not only been Nigeria’s and Africa’s leading long jumper for the past seven years, but also in the world top five.

Who is Ese Brume?

She hit global prominence when she was crowned Commonwealth champion in Glasgow in 2014. Two years later, aged just 20, Brume came fifth at the Rio Olympic Games, smashing her personal best of 6.68m with a jump of 6.81m in the process.

Coached by Yaya Kayode and, since moving to North Cyprus in 2016 to study at EMU, by Turkish Cypriot Hasan Maydon, Brume’s presence at EMU has allowed her to compete in Turkey’s top athletics competitions too.

In 2017, she won the Long Jump title at Turkey’s University Games in Pamukkale in 2017, setting a new games record of 6.68m. Held annually, the University Games attracts top athletes attending universities in Turkey and the Turkish Republic of North Cyprus (TRNC).

Brume proved her class in the same competition, held in Adana in May the following year, this time becoming a double Turkish student champion. She not only retained her long jump title, but also added the 200m sprint too in a personal best time of 24.20 seconds.

The young Nigerian athlete’s focus switched to the World Championships in Doha in 2019 and she delivered again, securing a bronze medal with a jump of 6.91m. There were delirious scenes when Brume arrived back at Ercan Airport in the TRNC.

The athlete, who is on a scholarship in North Cyprus, also posted her gratitude on her Instagram page, thanking EMU rector Necdet Osam, her coaches and other major supporters at the university.

Brume’s coach Kayode Yaya told other Nigerian students at Ercan: “This is the kind of welcome we may never receive from our nation!”

That’s likely to change now Africa’s undisputed long jump queen and two-time Olympian Ese Brume has a bronze medal to add to her glittering list of titles and medals.

For Turkish Cypriots, who are unable to compete under their own flag at the Olympics due to the international isolation of the TRNC, Brume’s success using their country’s sporting facilities to train, allows them to dream about what they could accomplish when the sporting embargoes are finally lifted.