Euro 2024 Qualifiers: the teams Turkiye & Azerbaijan will be playing in the group phase

Sunday’s draw for the Euro 2024 qualifiers has been kind to Turkiye, who will fancy their chances after being drawn in Group D against the likes of Wales, Latvia and Armenia.

Turkiye’s toughest opponent according to FIFA world rankings are in-form Croatia. The Balkans side recently jumped three places in the global list to 12th place after wins against Denmark (2-1) and Austria (3-1).

Wales, who qualified for the Qatar World Cup, and are currently ranked 19th by FIFA, will also form tough opposition to the Turks, who last month lost 2-1 away to lowly Faroe Islands in the Nations League. That defeat and other poor performances saw Turkiye slip down to 45th in the global rankings.

Turkiye’s other two Group D opponents are Armenia, who are ranked 93rd, and Latvia who score 129th on the global list of 211 nations.

In contrast, Azerbaijan (ranked 123rd) have a much tougher group. Their Group F competition includes Euro 2020 quarter-finalists Belgium, who are currently ranked world number 2 by FIFA.

Teams from ten qualifier groups will compete for 24 places at the 2024 European Championship. The top two teams from each group go through to the finals of the tournament, along with the host nation Germany.

The remaining three places for Euro 2024 will be determined by play-offs based on performances at the Nations League. 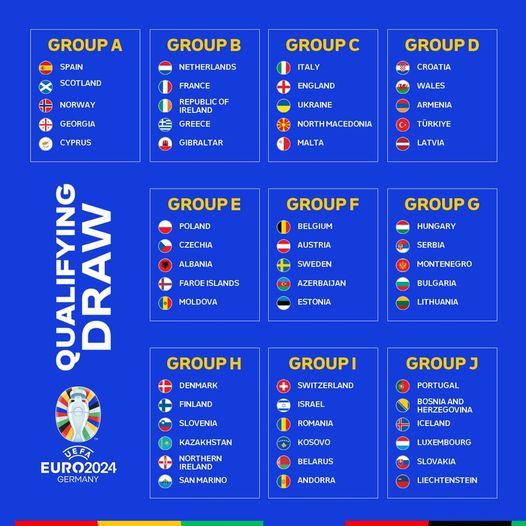