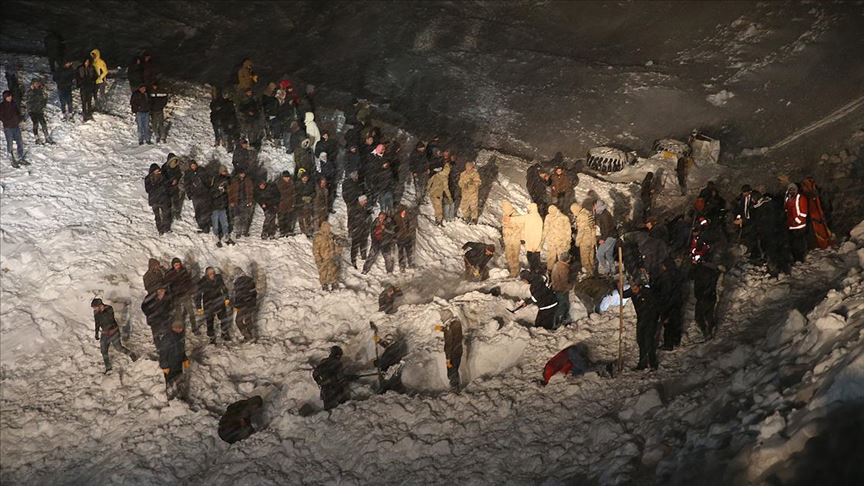 A rescue team searching for people trapped in an avalanche in the town of Bahçesaray, near Van, eastern Turkey, were themselves hit by another avalanche killing eight rescuers.

Local people had joined a rescue team from AFAD (Turkey’s Emergency and Disaster Management body) on a stretch of highway near Bahçesaray in a desperate search for victims after an avalanche struck there late on Tuesday.

It is believed five people were killed in the first avalanche, while others remain trapped under snow in their vehicles.

Disaster struck again this morning when a second avalanche struck the rescue team as they sought to dig out last night’s victims in an area surrounded by mountains.

Eight people were killed when they were hit by the second avalanche, although many more were saved.

A new rescue team has been sent to the region to help with the search and rescue effort.

Van Governor Mehmet Emin Bilmez said, “An avalanche fell on the rescue team who were involved in the search [for victims of the first avalanche]. Eight people died [in the second avalanche], thirty people were reached.”

Turkey’s Minister of the Interior Süleyman Soylu confirmed there were at least 12 fatalities from the two avalanches.

Bahçesaray Council Leader Meki Arvas told state broadcaster TRT that, ”Work is continuing quickly. There is heavy snowfall, the weather is cold. Despite everything, teams are working. The injured are not life-threatening.”

He added that, “Citizens participating in the [rescue] work are [the ones trapped] under an avalanche.”

AFAD Van District Head Osman Uçar also said that following the second avalanche, AFAD team members had managed to free themselves, but many local people who had volunteered to help remained buried beneath the avalanche.