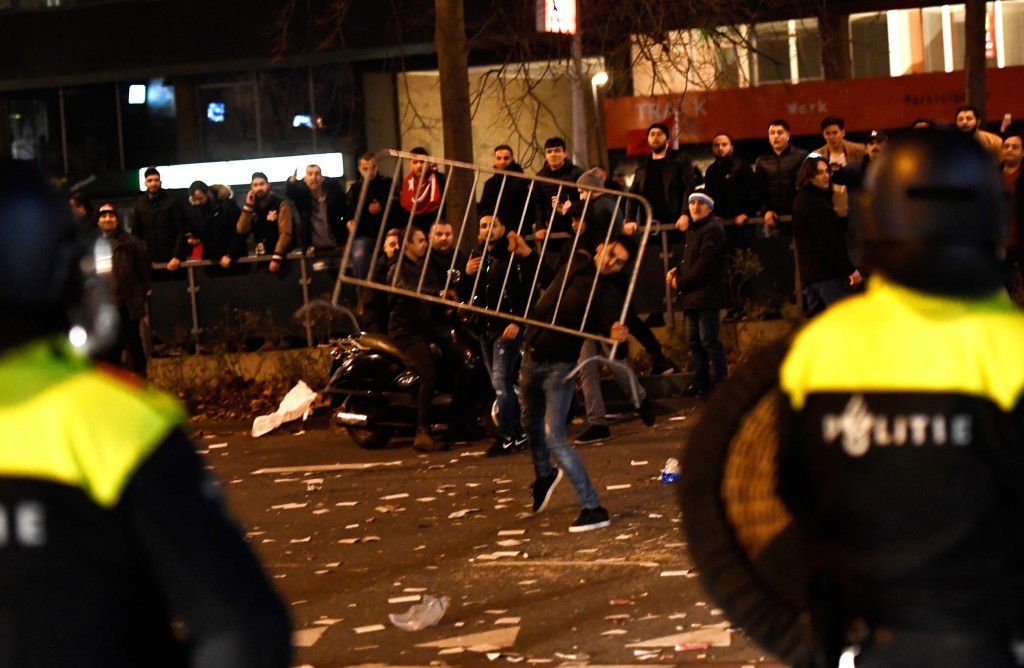 Diplomatic relations between Turkey and several European countries continue to deteriorate over their blunt refusal to allow senior members of the ruling AK Party to hold political rallies in their cities.

There was uproar after Germany and Switzerland blocked planned AKP rallies. But tensions have boiled over with the Netherlands in the past 24 hours after they cancelled permission for Turkey’s Foreign Minister to fly into Rotterdam and deported another Turkish Minister from the country.

The developments prompted clashes between Turkish-origin, pro-AKP demonstrators and Dutch police in Rotterdam. A big protest was also held outside the Dutch consulate in Istanbul, while the two governments deepened their war of words, with Turkish Prime Minister Binali Yıldırım warning his country would retaliate in the “harshest ways” for barring his ministers.

The AKP is currently engaged in a major campaign at home and abroad to urge Turkish citizens to vote ‘Yes’ in the upcoming Turkish referendum and give more powers to the President. Critical to the AKP’s 16 April referendum aspirations is securing the support of Europe’s 5 million plus Turks – many based in Germany and the Netherlands.

However, with elections also looming in the Netherlands, France, and Germany, where mainstream political parties are facing a major threat from far-right politicians and their populist-driven anti-Islamic policies, the normally accommodating Dutch and German governments have decided to curtail the political rallies of Turkey’s Islamists, to the fury of the AKP.

Citing “security concerns”, venues in Cologne and Gaggenau in Germany, Rotterdam in Holland, Zurih and Basel in Switzerland, as well as rallies in the Austrian towns of Hoerbranz, Linz and Herzogenburg have all cancelled, often at short notice, events where AKP Ministers were due to speak. The European authorities have relayed their concerns to Turkey and asked that the AKP stay away at this sensitive time.

Turks from across the political spectrum have slammed these decisions, claiming they undermine the EU’s own democratic principles and free speech, as well as pander to European racists. The view seems even more justified given the delight expressed by Dutch far-right leader Geert Wilders about the bans on Twitter, who has claimed them as a victory for his party.

Go away and never come back @drbetulsayan and take all your Turkish fans from The Netherlands with you please. #byebye https://t.co/FLKFNX2XGm

Great! Thanks to heavy PVV- pressure a few days before the Dutch elections our government did NOT allow the Turkish minister to land here!! https://t.co/hO9U082AKi

European politicians have challenged the wisdom of the bans. Sweden’s former Prime Minister Carl Bildt said it was “questionable”, pointing to how other nations’ politicians have been free to campaign in EU states. Claudia Roth, a politician from Germany’s opposition Green party, went further warning that such bans would end up being counter-productive:

“Then we best demonstrate most clearly the difference between us and an autocracy on its way to dictatorship when we show that freedom of opinion, freedom of assembly and, of course, press freedom applies to all,” Roth said.

The situation grates even more with the ruling party as the same restrictions have not been applied to Turkey’s opposition parties campaigning for a ‘No’ vote. For AKP and its supporters, this is blatant hypocrisy, reflected in coverage by various Turkish media, including the Star, a pro-government daily, which last week wrote:

“It seems that the German authorities are continuing their psychological warfare by systematically closing locations where Turkey’s justice and economy ministers are scheduled to hold speeches. … If Germany or any other country wanted to ban all election rallies for reasons having to do with domestic security, it would perhaps be understandable.”

“But the fact that some terrorist organisations and Erdoğan opponents are being given permission to stage rallies and even receiving support for their No campaigns, while only Yes events are banned for strange reasons like ‘the room’s fire safety provisions were insufficient’, and the responsibility for this is then given to the municipality as if the [Turkish] partner didn’t understand a thing doesn’t testify to a clever strategy but to crass aggression.”

There have been harsh words from Recep Tayyip Erdoğan about the dispute. Over the past week, the Turkish President, renowned for his abrasive comments, has repeatedly accused the Dutch and German authorities of behaving like “Nazis”.

His jibes generated immediate rebukes. German Justice Minister Heiko Maas called them, “abstruse, malicious and absurd”, while German Chancellor Angela Merkel described them as “sad” and insisted “These comparisons with the Nazis must stop.” Mark Rutte, the Dutch Prime Minister claimed President Erdoğan was “way out of line”.

Relations between the NATO allies were already strained due to ongoing criticism of Ankara for its increasingly authoritarian behaviour. Following a coup attempt in Turkey last summer, the country has been under a state of emergency, during which tens of thousands have lost their jobs, including judges, journalists and academics. Multiple media outlets have been closed and the assets of dozens of businesses seized.

The government claims all those suspended or sacked from their jobs, or arrested are suspected of terrorism – either supporters or FETÖ (murky religious cult led by Fetullah Gülen) or PKK (Kurdish nationalist militants). But this view is vehemently rejected, with affected parties accusing the AKP authorities of a “witch-hunt” and “counter-coup”.

Turkey at risk of degenerating “into an authoritarian presidential system”

To Ankara’s dismay, European actors are ignoring what Turkish officials are telling them about the threats they are facing, and instead continue to voice their concerns over what they perceive to be Turkey’s worsening democracy and President Erdoğan’s desire to absorb evermore powers. Earlier this week, the Council of Europe (CoE) became the latest institution to report on the situation.

The CoE had asked its constitutional law experts – an advisory body known as the Venice Commission – to assess the constitutional changes being put to the Turks in April’s referendum and how it would impact on the country’s democracy.

The lawyers were unequivocal in their opinion, warning that by “removing necessary checks and balances, the amendments would not follow the model of a democratic presidential system based on the separation of powers, and instead would risk degeneration into an authoritarian presidential system.”

The view is shared by many in Turkey, who fear for their future. ‘No’ campaigners claim there is breathtaking hypocrisy with the government’s behaviour towards Europe given how it muzzles opponents in Turkey: 152 journalists are currently in jail, as are the co-leaders and several MPs from Turkey’s second biggest opposition party HDP.

The referendum campaign has again brought to the surface the deep polarisation within the Turkish electorate. Unsurprisingly, European states are keen to avoid importing such foreign disputes into their midst. Yet their actions have seemingly achieved just that.

In an extraordinary 24 hours, the Dutch first told the Turkish Foreign Minister Mevlüt Çavuşoğlu he was unwelcome to hold a rally on Saturday. When it became clear the Minister intended to visit the Netherlands regardless, Dutch officials took the unusual move of withdrawing permission for Mr Çavuşoğlu’s plane to land. The Turkish Foreign Minister called the decision “a scandal” and threatened the Netherlands with “sanctions”, without specifying what these would be.

On the same day, Mr Çavuşoğlu’s colleague Family and Social Policies Minister Fatma Betül Sayan Kaya, who had been campaigning in Germany, crossed into neighbouring Netherlands to do the same. She was advised she could not hold a rally in Holland, but the Turkish Minister said as she was already in the country she would travel to the Turkish Consulate in Rotterdam and hold a meeting with a small group of locals there instead.

The Dutch authorities refused permission for this too and formed a blockade around the consulate building. When Minister Sayan Kaya arrived there on Saturday evening, five members of her team and the Turkish Chargé d’affaires were arrested. The Minister was then driven to the border with Germany, where she was ejected from the country because she was, according to Rotterdam Mayor Ahmed Aboutaleb, an “unwanted foreigner”.

Mrs Sayan Kaya tweeted live as the scenes around her unfolded, complaining about her “inhumane treatment” at the hands of the Dutch authorities. In one post, she claimed “Netherlands is violating all international laws, conventions and human rights by not letting me enter Turkish Consulate in Rotterdam”. In another, she said, “Democracy, fundamental rights, human rights and freedoms… All forgotten in Rotterdam tonight. Merely tyranny and oppression.”

Netherlands is violating all international laws, conventions and human rights by not letting me enter Turkish Consulate in Rotterdam

Dutch ambassador not welcome in Turkey

The ugly scenes shocked Turks and prompted several thousand pro-AKP supporters, who had gathered to meet the Families Minister Sayan Kaya, to protest in Rotterdam. They waved Turkish flags and shouted anti-Dutch slogans, while a few threw eggs and stones at the police, who responded by charging at them with mounted police and dogs. Several demonstrators were injured, including one severely bitten by a police dog.

There was also a demonstration outside the Dutch Consulate in Istanbul. One protestor managed to gain access to the roof, removing the Dutch flag, hoisting the Turkish flag in its place.

To top it all, a statement issued by the Turkish Foreign Ministry made it clear the Dutch ambassador was not welcome to return to Turkey anytime soon:

“It has been notified that we do not wish for the Dutch ambassador, who is currently on leave outside of Turkey, to return to his job for a while.”

Contrary to rally refusals in Holland, Germany, Switzerland, and Austria – whose Chancellor Christian Kern has called for an EU-wide ban on Turkish politicians campaigning inside Europe – France has announced it is permitting the AKP to hold political meetings. On Saturday, Mr Çavuşoğlu arrived in Metz in eastern France for a rally on Saturday evening, tweeting that he was there to “to have a meeting with our Consul-General and to gather with our citizens”.

French officials said other AKP rallies with the local Turkish population have been authorised and will be allowed to take place unless they represent a threat to public order.

The Dutch government claimed they had considered allowing smaller meetings too, but these ideas were dismissed following ‘Turkey’s threats of sanctions’, while adding, “The Netherlands regrets the course of events and remains committed to dialogue with Turkey.”

Our countrymen did not leave us alone in #Metz. Those who could not find any place inside, embraced us outside the meeting hall. pic.twitter.com/t5bZnbBcMQ

Meanwhile in Turkey, several lawyers and citizens have highlighted that the AKP is currently in breach of Turkish election law that it ironically passed a decade ago.

Regulation 5749, which came into force on 13 March 2008, prohibits Turkish election propaganda being made abroad, and similarly bans the use of Turkey’s diplomatic missions for the same.