A TRNC Minister has been forced to defend himself after details emerged he had gone on holiday to Jordan by flying out from an airport in South Cyprus using a Republic of Cyprus passport.

A photo of Labour and Social Security Minister Zeki Çeler and his cousins at Paphos Airport, posted on social media on Tuesday, quickly went viral and became the focus of media attention across Cyprus and in Turkey.

While thousands of Turkish Cypriots travel abroad using Republic of Cyprus documents it is believed Çeler, who is an MP for the left-wing Communal Democracy Party (TDP), is the first serving Minister from the Turkish Republic of North Cyprus to do so.

News about the minister’s actions has split public opinion, with many calling on the 37-year-old politician to step down from his post, while others have rallied around him. On Wednesday, the minister issued a statement on his personal and fan Facebook pages defending his conduct.

Mr Çeler wrote that his decision to fly out from an airport in the South was due to the ‘exorbitant’ prices charged by airlines in the North:

“Before anything else, it must be noted that specifically because of the exorbitant prices of flights from North Cyprus I, like the majority of Turkish Cypriots, use airports in South Cyprus because most of the time they are far more economic.”

The minister maintained he had done nothing wrong, nor did he have anything to hide, hence posting the pre-holiday snap on Facebook. He claimed he would have made the same travel plans whether he was a government minister or not, adding that since the TRNC’s national airline had gone bust in 2010 airlines flying to Ercan Aiport had taken advantage of the situation to “rip-off” Turkish Cypriots by charging significantly more.

His comments were not able to stem the tide of criticism against him, including from TDP voters. Penning a response beneath Mr Çeler’s statement, Jale Ahmet Özmanevra wrote:

“I am 63 years old, [and] as someone who always votes for the Left and belongs to the TDP family, I am ashamed by the actions of Zeki Çeler, I wish my hands had been broken instead of voting for Zeki Çeler. This community has endured a lot and as someone who has been a refugee three times over, I did not just find this state on the ground. Because it is expensive, should we give up on our own state and institutions?” 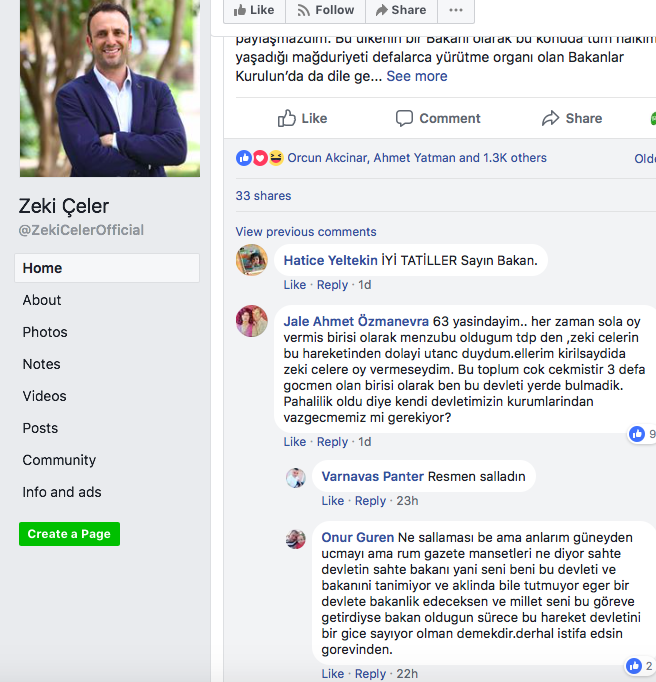 Echoing her comments was Onur Guren, who said: “I understand flying from the South, but what do the headlines in the Greek Cypriot papers say, illegal state, illegal minister. That is to say they don’t recognise me, you, this state or the minister, and they don’t even want to keep us in mind. If you are going to undertake ministerial duties for a state and this nation has given you this position, to be so disrespectful during your time as a minister is to spurn your state. He should resign immediately from his post.”

While Mr Çeler’s fan page was dominated by critical comments, there was more support on his personal Facebook page, with many wishing the minister a good holiday or sympathising with his views. Muazzez Bengisu wrote, “Good holidays…There is no illegal behaviour here. If you carry a Cypriot identity card then this nation can enter and leave this island as it pleases. This should not even be a matter for discussion.”

The collapse in the value of the Turkish lira over the past year has made North Cyprus residents wary of their diminishing spending power. It comes on top of the decades-old international isolation of the TRNC, imposed at the insistence of Greek Cypriots, which not only adds extra travel time through the enforced touch-down in Turkey, but also additional costs to flights.

Last year, an estimated 30% of all TRNC holidaymakers flew out via airports in the South, while a leading British tour operator to North Cyprus said they had seen a 400% increase in bookings to Larnaca following the UK’s transit rule requiring all passengers to disembark from planes in Turkey for further security checks. The tour operator estimated one in five Britons travel to the TRNC via the South.