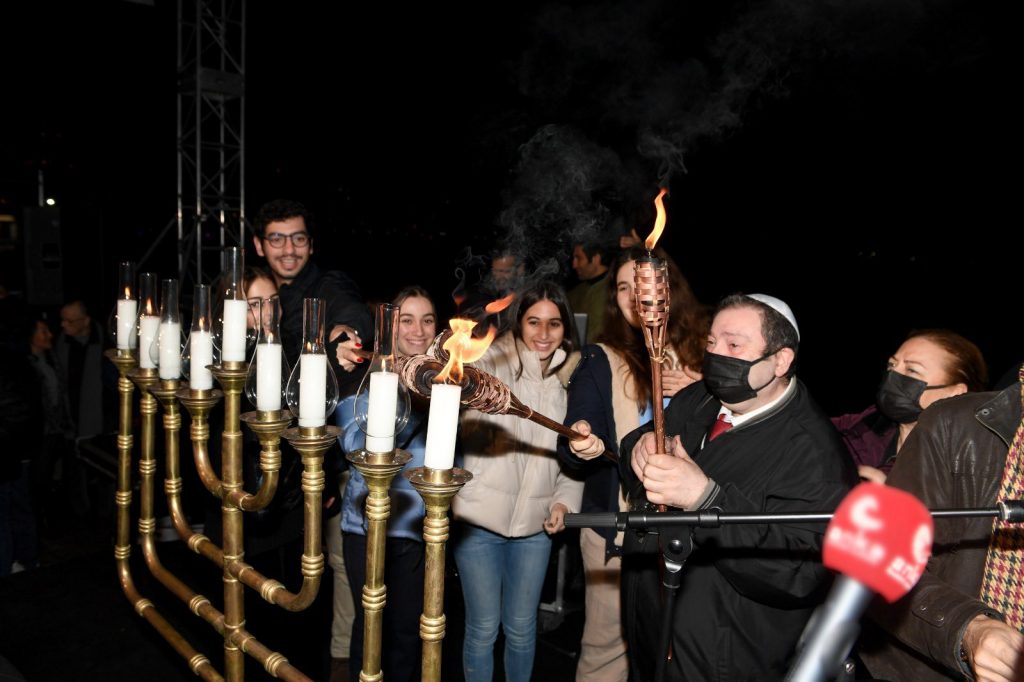 Türkiye’s Jewish community marked the final day of Hanukkah on Sunday night in Istanbul’s Bebek Park, where the eighth and final candle on the menorah was lit.

The ceremony was watched by officials from the Governor of Istanbul’s office and local councils, foreign diplomats serving in Turkiye, and members of the wider Turkish society.

The evening included songs, music, and prayers involving people of all ages from the Jewish community. Türkiye’s Chief Rabbi, Isak Haleva, was forced to join by video link after falling ill.

During Sunday’s event, Ishak Ibrahimzadeh, co-leader of the Turkish Jewish community, said they were pleased to observe Hanukkah in Türkiye, but were saddened that their Jewish brothers and sisters elsewhere, “like those in Ukraine”, were unable to observe this vital date in the Jewish calendar.

“We wanted to set up a video link with Ukraine, with a place with a large Jewish community and asked a friend to light a candle there and read a message for Hanukkah. But he told us that he had to go to the community centre to light the candle and he had none at home, nor did he have any electricity … And he could not go to the centre either, as the city he lived in was under bombardment,” Mr Ishak Ibrahimzadeh said, according to an article in Daily Sabah.

Hanukkah was also celebrated in the Turkish Republic of North Cyprus. President Ersin Tatar met with Rabbi Chaim Hillel Azimov and members of the local Jewish community on 21 December and helped light a candle on the menorah.

Why and how is Hanukkah celebrated?

Hanukkah, also known as the Festival of Lights, is an annual eight-day religious festival that runs for eight days, commencing on the 25th day of the Jewish month of Kislev. This year, Hanukkah started on 18 December in the secular calendar and ran until 25 December.

The word Hanukkah is Hebrew for “dedication” or “consecration”. The annual festival commemorates the historical rededication of the Second Temple in Jerusalem.

This holy site, where the Al Aqsa Mosque currently sits, was first built by the Jews in the 10th century BCE. It was completely destroyed by the Babylonian siege of Jerusalem four centuries later. The Second Temple was rebuilt soon after, only for it to be destroyed again, this time by the Romans in 70 CE.

In the second century BCE, the Jews faced the tyranny of Antiochus IV Epiphanes, who ordered the desecration of the Second Temple. After seizing control of Jerusalem, the Greek ruler demanded that the head of a Greek God, Zeus, be added to the Temple and that pigs (an unclean animal in the Jewish faith) be slaughtered there. He also banned Judaism.

Jews rose up against this tyranny, fighting against their oppressors for two years, from 167 BCE to 165 BCE, in what became known as the Maccabean Revolt. The uprising was named after Judah Maccabee, the son of a Jewish rabbi, who led the rebellion after his father died.

According to the Talmud (Jewish rabbinical text), after the temple was recovered and cleaned, the Jews needed olive oil to light the menorah. It was believed there was only enough oil to burn for one day, but miraculously the oil lasted for eight days.

Hanukkah is therefore a time for Jews to celebrate their religious freedom and the miracle of the light. On the first night, Jews worldwide light the first candle on their Hanukkah Menorah (a nine-branched candelabra) using a shamash candle, which is used to light an additional candle every night until the final evening. As each candle is lit, those present chant blessings and sing festive songs.