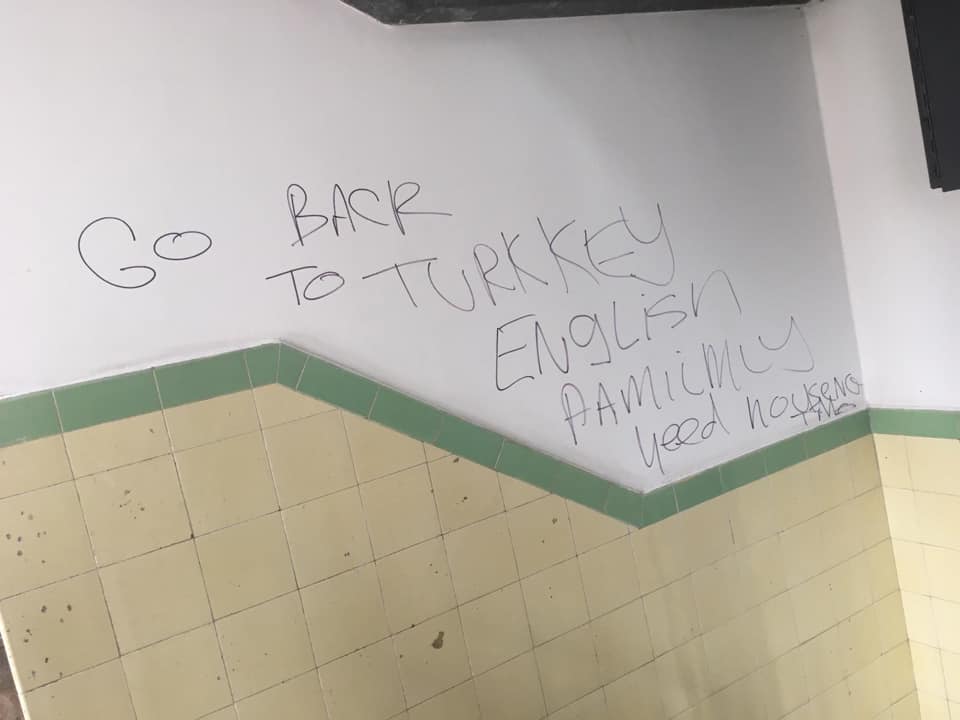 The local community has been quick to extend their support to a family in East London, who have had racist graffiti scrawled outside home telling them to “go back to Turkkey [sic].”

The graffiti, written with a permanent black marker and littered with spelling mistakes, was left on a wall by the front door of a family originally from Turkey.

The Mayor of Hackey Philip Glanville quickly appealed for details, so the offensive writing can be removed. Responding to a Facebook post about the graffiti shared by Labour councillor Peray Ahmet, Mayor Glanville wrote:

“Can someone tell me the exact location so I can get it removed. Disgusting racist graffiti that has no place anywhere, least of all Hackney.”

The graffiti was brought to light by Turkish-Kurdish community group Day-Mer and Hackney Stand Up to Racism and Fascism, which posted a picture of the offensive text along with “a message of solidarity and unity to the Turkish family.”

In a statement posted online, the anti-racism group said:

“We say our Turkish and Kurdish sisters and brothers are welcome and valued here. They are part of the great family of Hackney which they have made a better place to be by being here.

“London’s glory is its diversity – 7 million people, 14 major faiths, 300 languages – it is the most multicultural city in the world.

“When the racists take on one part of our community – they take us all on.”

The group added that the recent demonstrations in support of the “Black Lives Matter” movement “has shown that anti-racists are the vast majority”, and that “The racists speak for no-one but themselves.”

Hackney Stand Up to Racism and Fascism ended by stating they “stand with the family against the racists who have targeted them. Unity and Solidarity will beat the poison of racism.”