Why Azerbaijanis are protesting Russian peacekeepers on the Shusha-Lachin Road 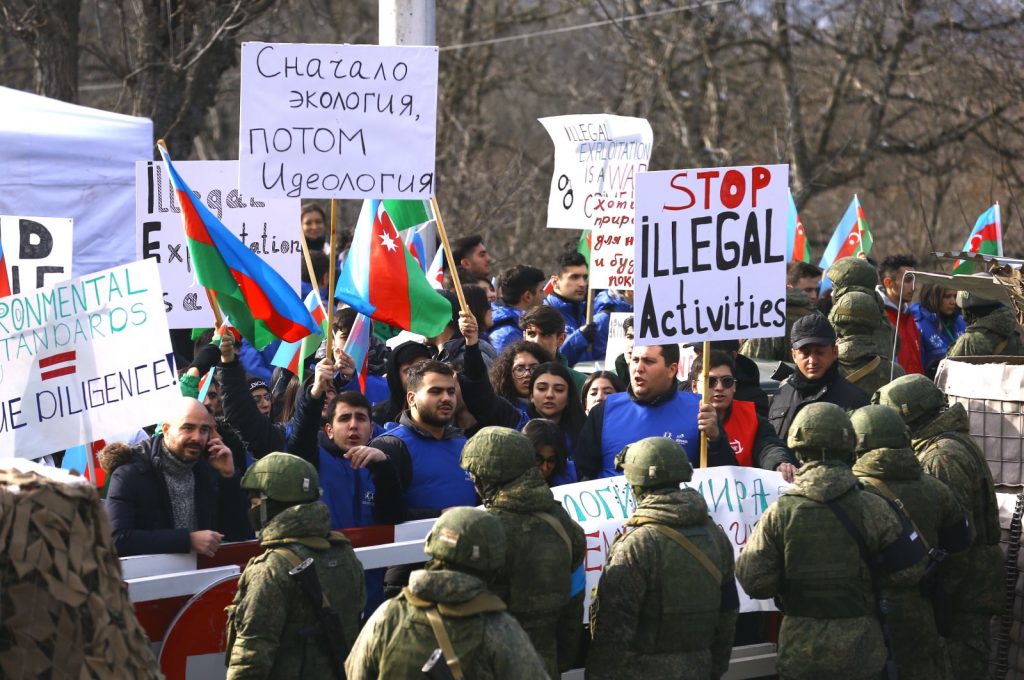 Since the start of this week, members of the Azerbaijani public and environmental activists have been holding round-the-clock protests on the Lachin-Shusha Road, also known as the Lachin Corridor, against Russian troops. The protesters are objecting to the troops blocking access along this main road in the Karabakh region.

The demonstrations, which started on 12 December, are the result of the rightful dissatisfaction of the Azerbaijani public over illegal economic activity in the area. These include the looting of natural resources, and damage to the environment in the territories of Azerbaijan in which Russian peacekeepers are deployed.

The protests were started early on Monday by Azerbaijani ecologists representing non-governmental organisations (NGOs), who wanted to draw attention to the illegal exploitation of natural resources in the region where a Russian peacekeeping contingent is stationed temporarily. The protestors have chanted slogans demanding an end to the plundering of these natural resources.

A growing number of activists have assembled on the Lachin-Shusha Road, where they have erected tents. They say they will not leave until they are permitted to enter the region where two mines are located.

Negotiations with the Russian Peacekeepers’ High Command on 3 and 7 December 2022 had led to the understanding that a group of experts from Azerbaijan’s Ministry of Ecology and Natural Resources, the State Property Service from the Ministry of Economy, and AzerGold CJSC would be allowed to commence preliminary monitoring of the area on 10 December.

These inspections were to alleviate the growing concerns of Azerbaijanis about the illegal exploitation of mineral deposits, as well as the damaging impact on the environment and related consequences from the illegal mining.

This entire area of Karabakh is the territory of Azerbaijan, which it regained from Armenia following the war in 2020. The area is currently under the protection of Russian troops who form part of a 2,000-strong peacekeeping mission that was agreed as part of the ceasefire agreement that ended the Armenian-Azerbaijan conflict two years ago.

The agreement with senior Russian officers was that the Azerbaijani delegation would inspect the environmental conditions at the Gizilbulagh gold deposit and the Damirli copper-molybdenum deposit.

The expert delegation was set to assess the potential risks and threats to the environment, as well as to underground and surface water sources. The team also planned to monitor other areas, and to check and update the land registry records. However, despite the group’s arrival in the monitoring area on 10 December, the delegates were unable to carry out the agreed works.

The planned inspection and monitoring did not take place because the Russian peacekeepers failed to enable the necessary conditions to allow them to carry out these works. Essentially, the Russian troops prevented the entire process.

This led to Azerbaijan’s Ministry of Foreign Affairs sending a diplomatic note to Russia on Sunday, 11 December, highlighting concerns about the “illegal exploitation” of natural resources in the liberated Karabakh region, and complaints about their officials being prevented from entering the area a day before.

The protests against Russian troops stationed in the Lachin Corridor are set to continue, with more Azerbaijanis lending their support to the action. The incident has exposed the vagueness around the mandate of the Russian peacekeeping force, which is coming under increased scrutiny.

This article was co-authored by journalist Ali Zulfugaroglu and research analyst Elnur Eltürk, both from Azerbaijan.