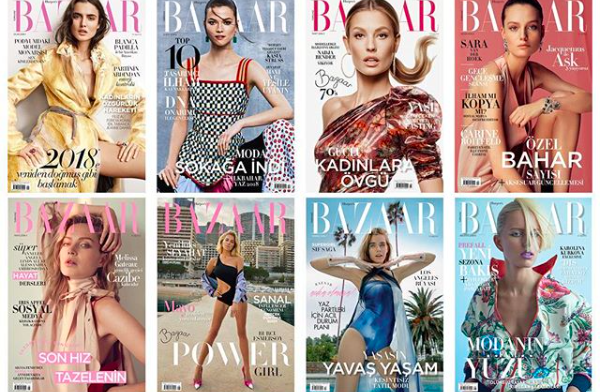 This weekend, from 20 to 21 April 2019, the second edition of Istanbul Modest Fashion Week will take place in its glorious home city. Launching to much anticipation from the media, influencers and the public alike, Istanbul Modest Fashion Week (IMFW) is going to be bigger than ever, with a host of top designers set to wow audiences. Dian Pelangi, Nihan Peker and Rabia Z are just some of the designers showcasing the latest trends in modest attire this season.

The top draw of the event, however, will be the appearance of supermodel Halima Aden, who will showcase her inaugural collection in collaboration with IMFW’s main sponsor: Modanisa.com.

While news of this stellar collaboration between two of modest fashion’s biggest exports has been well received by international press, Turkey’s glossiest fashion titles have shown practically no interest. This fact is, unfortunately, not surprising.

One only needs to glimpse at Turkey’s leading fashion magazines, from Vogue Turkey to Turkish editions of Elle and Harper’s Bazaar, to see a distinct lack of hijabi, plus-size or people of colour (PoC) cover stars. In fact, you could count the number of times in the last decade one of them sported a diverse cover star on one hand: Naomi Campbell for Vogue Turkey in 2014 and Winnie Harlow for Elle in 2018.

Typically, Turkey’s fashion media feature white Western actresses, models and singers or their Turkish counterparts. This is in stark contrast to magazines in the UK, US and UAE who have jumped on board the diversity train and made a real effort to showcase figures that represent the wider population of readers. No doubt these fashion giants know how much of an impact public scrutiny can have – especially if gaining a fairer, more diverse world is the goal.

If magazines like Allure, Harper’s Bazaar and Vogue are sporting hijabi models and influencers as their coveted cover stars, why can’t Turkish fashion media do the same?

If they needed further incentive to do so, they have only to look at the nation’s largely Muslim population – according to research at least 96% of Turks identify as Muslim, with 51% defining themselves as “religious” according to a lifestyle poll by Konda in 2018. In the same research, those wearing a headscarf – just over half of all women – remains virtually the same as a decade ago.

According to a Thomson Reuters report on the State of the Global Islamic Economy (2018), Turkey is the Muslim country with the largest fashion spend in the world ($28 billion is spent on fashion annually). Surely, any fashion publication serious about growing its audience and income would make the most of such a large demographic that is doing some of this spending?

There’s another incentive: last October, Bain and Co. reported 40% of spend in the luxury fashion market is on modest fashion, while in February 2019, Newsweek reported that Muslim women are taking fashion to the next level. The compelling business case has seen leading fashion houses such as Dolce and Gabbana and Oscar de la Renta, more recently Michael Kors present collections that are specifically aimed at conservative dressers.

In Turkey too, one of the country’s most successful couturiers, Rasit Bagzibagli designed an exclusive capsule collection for Modanisa, which debuted at Dubai Modest Fashion Week to great acclaim and commercial success. Bagzibagli’s muse was none other than Halima Aden – the first headscarf-wearing model to appear on the catwalk. Her arrival in Istanbul last March to help launch the Desert Dream collection saw her mobbed by young, trendy modest dressers, while national press and major broadcasters queued up for interviews. Bizarrely, Aden’s visit barely featured in Turkey’s fashion titles.

Aden remains in hot demand by major brands and fashion media the world over. She posed with two other rising models as cover stars for Vogue Arabia’s current (April 2019) issue. The models, who happen to be hijabi women of colour, discussed choice, modesty and diversity with the leading publication.

What is most surprising is that Turkey, despite having a reputation as one of the world’s most multicultural hubs, is being outdone by other territories, including those that have a track record in the deliberate exclusion of certain groups and religious identities. This is a sobering thought, considering the current global political climate.

Despite this, or perhaps, because of these mounting tensions between differing groups, many of the world’s leading fashion outlets are countering divisiveness with inclusivity. For example, in the weeks leading up to this weekend’s showcase in vibrant Istanbul, Vogues Arabia, Germany and Australia ran positive stories on 21-year-old Aden’s milestone collaboration with the world’s leading retailer of modest fashion, Modanisa.

There has also been international press coverage of IMFW and Aden including reports from the UK’s Independent and Metro newspapers, and US media giants Yahoo, Allure (of which Aden was a cover star) and Refinery29. Various Turkish national papers have even shared the news about the show’s homecoming featuring pictures of Halima.

Yet, despite all the media-friendly opportunities to engage with the news around Aden and IMFW (not to mention the traction this would generate from fans), Turkey’s fashion glossies are taking no note. Although they were contacted for comment on why this might be the case, representatives from some of Turkey’s leading fashion magazines declined to comment.

So, what does the lack of diversity in Turkish fashion media say about its landscape; its writers, editors and publishers? Well, it arguably demonstrates an underlying problem with the way otherness is viewed by the influential powers that be.

While some individuals have spoken out about this glaring oversight, including Turkish supermodel Tülin Şahin, others muddle comfortably on. But there’s hope.

In 2017, after Şahin and Aden bonded on and off the catwalk at Dubai Modest Fashion Week, the Turkish model said there was a need to “accept of the other”, adding that, “as long as people don’t force their views on me or others”, there is “room for everyone’s beliefs, views and styles of dress.

Although few in Turkey’s secular camp have followed Şahin’s lead, the global momentum around  diversity continues to pick up pace.

Due, in part, to years of complaints, as well as the impossible-to-ignore demands vocalised on social media, international media conglomerates have had to start paying attention to the needs of their readers (and not just to those of their advertisers). So, here’s hoping Turkey’s fashion media will also be induced to broaden its perception of what is acceptably fashionable.

Guest writer Patricia Yaker Ekall is a former style writer for Huffington Post UK. Her articles have also featured in Esquire and the Times Literary Supplement.