Win yourself a pair of tickets to Şaka Maka, a new Turkish stand-up comedy show in East London 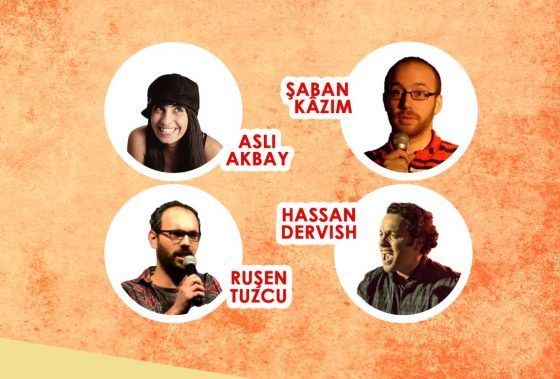 Later this month, a new Turkish comedy concept Şaka Maka will make its debut in Bethnal Green. Four young British Turkish talents, Aslı Akbay, Şaban ‘Shaban’ Kâzım, Hassan Dervish and Rusen Tuzcu, will be drawing on their ethnic roots to present an all-Turkish evening of comedy as part of the brand new Eastern European Comedy Festival. They will be live for your entertainment at the renowned Backyard Comedy Club on Sunday 25 February.

Visit this page for more details about the comedians performing on the night and to information on how to buy tickets to the event.

However, T-VINE is also giving away four tickets to the show thanks to those lovely people at Eastern European Comedy Fest. All you have to do to win a pair is to answer a simple question.

T-VINE is giving away two pairs of tickets to Şaka Maka’s show at the Backyard Comedy Club in Bethnal Green, East London, on Sunday 25 February 2018.

For your chance to win, answer this question

For your chance to win a pair of tickets, simply answer this question: What does ‘şaka’ mean in Turkish:

s notified within 24 hours of the competition closing.

If you are emailing your entry, do include your full name and daytime contact number. And unless you tell us not to, we’ll also add your email to T-VINE’s free e-newsletter.

The deadline for your competition entry is 23.59 UK time on Sunday 18 February. We will announce the winners within 48 hours after the competition closes.