World Cup Qualifiers: Turkey comes from behind to beat Latvia 1-2 in extra time

Turkey emerged with all three points from Monday night’s drama-filled game against Latvia in their Group G qualifier.

The win – the first for new manager Stefan Kuntz’s since replacing Şenol Güneş in September – keeps Turkey’s hopes of qualifying for the Qatar World Cup in November 2022 alive.

Striker Burak Yılmaz left it late for the Turks, converting a penalty in the 99thminute after a lengthy VAR review of a penalty incident.

Although Turkey had two thirds of the possession and 23 shots on goal to Latvia’s 6, they had not been able to convert their chances. Suddenly, however, the Turks ended up scoring at the wrong end of the pitch when defender Merih Demiral turned the ball into his own net to give the hosts the lead on the 70th minute.

The Turks continued to look for the winner without success, when Yılmaz was pushed down in the box in extra time. The Turks protested and the incident went to VAR in 94thminute and the penalty was eventually awarded.

Captain Yılmaz coolly put the ball beyond goalkeeper Roberts Ozols in the bottom left hand corner to secure an important away win for the Turks.

As the final whistle went, there were emotional scenes from the players, fans and manager Kuntz, who wiped tears of joy from his eyes.

Although Turkey remain in third place on 15 points, they are now just two points behind second-placed Norway and four points behind Group G leaders Netherlands. There are two games left for each of the six teams in the group.

Turkey’s next World Cup fixtures are next month. They play Gibraltar at home on 13 November, with Montenegro vs Turkey taking place three days after. 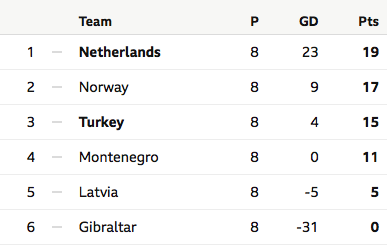