A neighbour in need: founder Phoebe Coles explains Vicinus’ work and why they’re fundraising for women’s shelters across the Cyprus Green Line

Seven years ago, Phoebe Coles and two female student friends formed a social action group to help marginalised people in Cyprus. The group morphed into Vicinus, a voluntary-managed organisation that is involved in island-wide social and educational projects to support the rights of women, children and migrants.

Vicinus has helped stage concerts for refugees, raise funds to combat the devastating impact of the recent wildfires, and collected toys for a children hospital, and food donations for a children’s charity.

One of its current projects is a fundraising campaign to help women’s shelters on both sides of the Green Line in Cyprus.

Statistics from the coronavirus pandemic period show a large spiral in incidents of domestic violence in both North and South Cyprus. Reports went up by around 50% in the South, while experts say the North saw a “three-fold” increase, which in turn put greater pressure on the few existing women’s shelters on the island to admit even more victims.

Vicinus’ fundraiser was launched on International Women’s Day in March and currently stands at £85. Phoebe would like to see it grow significantly before it the campaign ends on May 2022, with the group pledging to split the final total evenly between the Greek and Turkish Cypriot organisations running the shelters in Cyprus.

T-VINE talked to Phoebe, a British Greek Cypriot, about how Vicinus came to be, the group’s aims and its diverse work, and why she’s keen to see that spread across the Green Line.

Tell us about Vicinus

Vicinus is a voluntary humanitarian social action group founded in November 2016 by myself and two other young women, Todi Bankole from Nigeria and Malak Ejledi from Libya, when we were students in Cyprus.

The concept for this social action group began after visiting a refugee camp, and from there we were inspired to assist marginalised groups in Cyprus.

We were previously called the Humanitarian Aid Program (HAP), but recently rebranded as Vicinus.

“Vicinus in Latin translates to ‘neighbour’, which represents our ethos: to always help our neighbours in need”

At present, I am the director of Vicinus where I have led and managed various projects, educational initiatives, and fundraisers pertaining to women’s rights, migrant rights, child rights, and refugee rights issues. We recently also trained incredible interns from various countries remotely from around the world.

Vicinus in Latin translates to ‘neighbour’, which we feel accurately represents our ethos, which is to always help our neighbours in need.

To be clear, we are completely voluntary in nature. We are not registered as an official NGO [not-governmental organisation]. All donations collected for our projects go directly to the causes we are assisting, minus the small obligatory gofundme fee.

Your work cuts across the Green Line. Why is it important for Vicinus to be working island-wide?

This is very important to us. Human beings should be assisted regardless of background.  Humanitarian groups should be more inclusive to ensure that they can reach as many people as possible.

I am a British Greek Cypriot woman, and I wholeheartedly believe that humans should be treated equally, and deserve respect and support without discrimination.

Additionally, I have found that the more we interact, collaborate, and assist each other in a multi-communal setting, the more success we have. It helps to break down stigmas and stereotypes, and I believe it really contributes positively for the future of Cyprus generally. 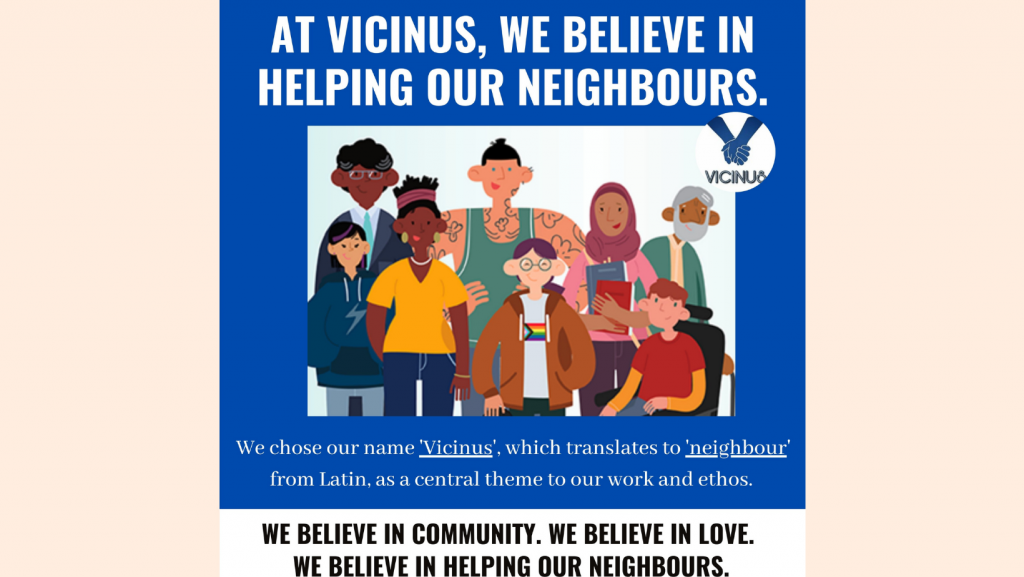 A great example of this was last year when we set up a donations campaign for the devastating fires. We collaborated with young people who were Turkish Cypriot, Greek Cypriot, and from the Maronite community, and we all worked together successfully to raise just under 10,000 euros for the cause. It is incredible to see how, when we all come together, amazing things can happen!

There is strength in diversity, and this is why working island-wide is important.

What type of projects has Vicinus supported, and were any in North Cyprus?

Below are some examples of the projects Vicinus have been involved in. We have:

We have also collected donations for the SOS Children’s Village in the North of Cyprus. It was part of an emergency campaign to collect and donate the following items: sunflower oil, olive oil, washing machine detergent, green beans, lentils, syrup, tahini, ketchup, sugar, toiletries and hygiene products.

Apart from the aforementioned SOS donation, much of our work so far has been remote-based related to the North of Cyprus. However, our aim is to expand our reach and network further and be a bigger presence in the North too!

How did Vicinus’s current fundraising campaign to support shelters for victims of domestic violence come about?

This fundraising campaign was established on International Women’s Day 2022. Vicinus are fundraising for two groups, one in the south of Cyprus and one in the north, that provide shelter for women escaping abuse.

Vicinus will send half of the proceeds raised to each organisation. As we are a multi-communal team, we wish to help support women across the island and be more inclusive with our work.

Unfortunately, domestic violence cases have increased worldwide with the ongoing pandemic, including Cyprus.

According to civil society sources, incidents of domestic violence in the South of Cyprus increased by 58% since the lockdown, that is, from the middle of March till the 22nd of April 2020.

Women’s shelter SPAVO also reported a steep increase in domestic violence during and immediately after the mandatory lockdown imposed due to COVID-19.

In the period 16 March  to 30 June 2020, the association recorded a 50% increase in SPAVO’s call centre cases and a 46% increase in the number of victims at shelters, compared to the same period in 2019, according to an article in the Cyprus Mail last October.

There is less data available for domestic violence in the North. However, a 2021 publication by the Mediterranean Nursing and Midwifery Journal – described online as an ‘official publication of the Cyprus Turkish Nurses and Midwives Association’ – captures the extent of domestic violence.

“The results of five studies that were done between the years 2007 and 2018 are worth mentioning. According to the results of a comprehensive study in Northern Cyprus, the frequency of domestic violence for women was 54.5% and of physical violence was 36.7% (Çakıcı et al., 2007).

Also from the same paper, “In a study which compared domestic violence in districts in Northern Cyprus, the highest violence rates were seen in Gazimağusa and the most common form of violence was yelling (57.76%) and 14% of the women were forced to have sexual intercourse by their spouses (The Centre for Migration, Identity and Right Studies (CMIRS), 2012).”

The paper also gives an indication of abuse increase during the pandemic:

“The most negative effect of COVID-19 pandemic on women’s health is the increase in domestic violence (Azcona et al., 2020). Although there are no scientific studies that show the latest situation in violence against women during the pandemic in Northern Cyprus, it was noted that the number of women presenting to the violence unit increased by 3 fold in 2021 (Women Support to Life Association (KAYAD), 2021).”

Who will benefit from this fundraising campaign?

Our first beneficiary is the Lefkoşa Türk Belediyesi (LTB, Nicosia Turkish Municipality) Kadın Sığınma Evi (Women’s Shelter). According to their website, this is the first and only shelter in the north of Cyprus. It was created in 2016 by the local Turkish Cypriot authorities.

“The LTB Women’s Shelter provides living spaces for women who have been subjected to violence. They can stay with their children in case of danger to life or if they need to get away from a violent environment.

“The Women’s Shelter can serve 7 women and 14 children in total. If the number of children joining their mothers exceeds the determined number, necessary supportive arrangements are made.”

For more information, please read their website about the shelter and services they provide. 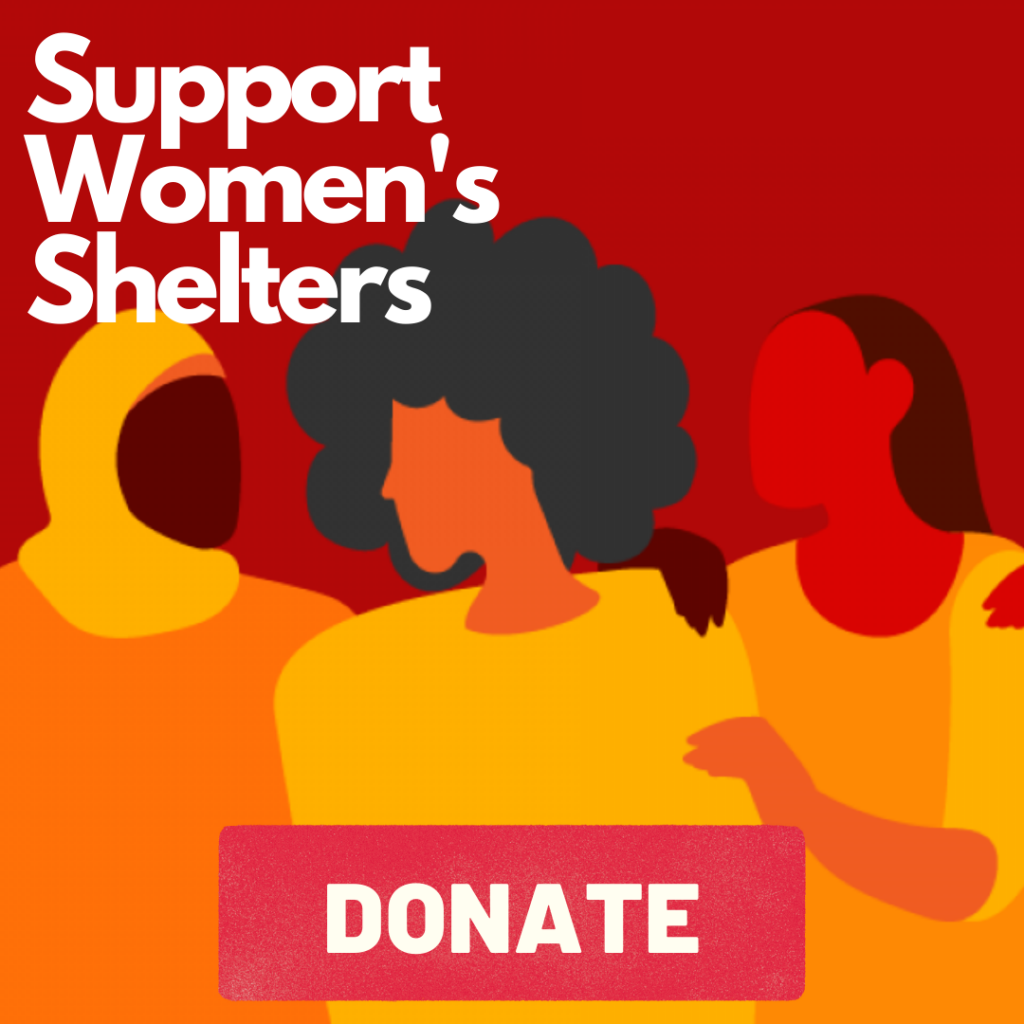 The second of our two beneficiaries are the Association for the Prevention and Handling of Violence in the Family, also known as SPAVO. This is how they describe themselves:

“The shelter is a safe home where women and children experiencing domestic violence can live temporarily. We will offer a room for you and your children. The rest of the house consists of common areas that you will share with the other guests. You will be asked to sign an agreement containing the conditions of residence and the necessary regulations ensuring your safety and others. The addresses of the shelters are confidential. In Cyprus at the moment, two shelters are operating for victims of domestic violence under our Association.”

There is more information under the Question and Answer section of their website about the shelters and services they provide.

What’s the deadline to donate?

This cause is very important: we must all come together as a community to support initiatives assisting women to escape from violence.

The deadline to donate to our fundraiser is midnight on 31 May 2022. Please give what you can and also share our our gofundme page: https://gofund.me/0485809e