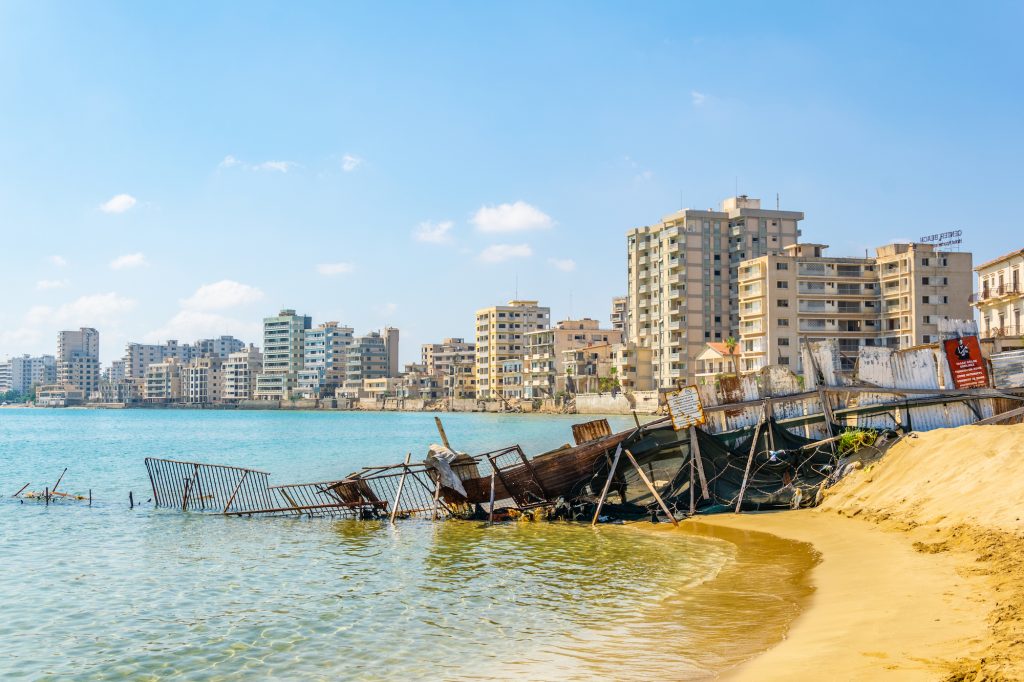 The fenced-off seaside resort of Maraş in the Turkish Republic of Northern Cyprus (TRNC) will be reopened under “Turkish administration”, Prime Minister Ersin Tatar has confirmed.

The PM made the comments during a visit to Istanbul to promote North Cyprus tourism, days after work to make an inventory of the area dubbed the island’s ‘ghost town’ got under way.

Speaking during a TV interview with CNN Turk on Wednesday, 31 July, Mr Tatar said it was time to resettle the Gazimağusa suburb, which has been uninhabited for almost half a century.

“The area has been closed for 45 years and that’s enough,” he said, a week after inspecting the site with military officials.

While the closed part of Maraş, also known as Varosha, is within the TRNC’s borders, it is classed as a military zone.

It was kept vacant following Turkey’s intervention in 1974 so it could be used as a bargaining chip in subsequent peace negotiations.

With its sandy beaches and high-rise hotels, Maraş, on the east coast of Cyprus, had been the island’s top holiday resort.

TRNC PM Ersin Tatar: “The area has been closed for 45 years and that’s enough”, adding that former residents can apply to the TRNC’s Immovable Property Commission for compensation

In June Deputy Prime Minister and Minister of Foreign Affairs Kudret Özersay announced that he was setting up a committee of experts to conduct a “scientific inventory” of Maraş. The team will examine land registry records, check the state of buildings and other property, assess environmental risks and establish which properties belong to the Turkish Cypriot Islamic foundation Evkaf.

“Research carried out show that most of the properties in the closed city of Maraş were Ottoman properties,” Mr Tatar said.

“The wrongdoings that took place during the British [colonial] era show that the properties were plundered. The area needs to be opened up to settlement under Turkish administration.”

PM Tatar said that such a move would enable former residents of Maraş to apply to the TRNC’s Immovable Property Commission (IPC) for compensation.

“It [the IPC] is recognised by Europe. They will have to apply there. Its former residents could be Greek Cypriots, British nationals or even Americans.”

Maraş could be reopened in stages, Mr Tatar explained, although he refused to give any timeline.

He said that opening Maraş would provide a boost to the economy, but denied stating it would become the “Las Vegas” of North Cyprus, as he had been previously quoted as saying.

Asked how the TRNC would pay for such a large-scale redevelopment of a zone that has been virtually untouched for almost five decades, Mr Tatar said the job would fall largely to “international investors”, with the state taking care of reconnecting infrastructure such as water and electricity.

Mr Tatar said that the Maraş move was taken as part of a wider strategy to counter the Greek Cypriot side’s unwillingness to share power and resources with the Turkish Cypriot side and their rejection of a solution at Crans-Montana in Switzerland two years ago.

He added that he had no expectations from a meeting between TRNC President Mustafa Akıncı and Greek Cypriot leader Nicos Anastasiades, due to take place on 9 August.

“The Greek Cypriots don’t accept the fact that there are two equal states on the island,” he said. “Everyone must wake up and see this reality”

In statements earlier in the week, Deputy PM Özersay accused the Greek Cypriot side of failing to take advantage of previous opportunities relating to Maraş.

Deputy PM Özersay: “If they [Greek Cypriots] had compromised … we could have set a nice example with respect to the future of Cyprus.  Given that we could not achieve any of this, I am of the opinion that they do not have a say on the issue [of the opening of Varosha].”

“If they had compromised … we could have set a nice example with respect to the future of Cyprus,” he said.

“Given that we could not achieve any of this, I am of the opinion that they do not have a say on the issue.”

Prof Özersay said that while former Greek Cypriot residents of the town were “stakeholders” in the future of Maraş, Greece and the Greek Cypriot administration were not.

He also said that a proposal put forward by former US Vice President Joe Biden in 2014 to reopen Maraş had been thwarted “at the last minute” by the Greek Cypriots.

As far back as May 1984 the UN Security Council, in resolution 550, said it was “deeply concerned by recent threats for settlement of Varosha by people other than its inhabitants”.

The resolution said it considered attempts to settle “any part of Varosha by people other than its inhabitants as inadmissible” and called for the “transfer of this area to the administration of the United Nations”.

The Greek Cypriots would have taken control of Maraş had they voted in favour of the UN’s “Annan Plan” in 2004.

The Turkish Cypriot side insist that much of the land there still belongs legally to the 448-year-old Evkaf trust, a stance reiterated this week by its head İbrahim Benter, backed up with Ottoman archives.

He told Turkey’s Yeni Şafak newspaper that Greek Cypriots who had bought property on Evkaf-owned land in Maraş would be given the right to rent it back.

Claims by the Greek Cypriot side that Evkaf had relinquished its rights over the land in return for a £1.5 million pay-off as part of agreements with the UK granting the island independence in 1960 were “baseless”, he told the daily.

This was a “false perception” that the land had been “sold”, Mr Benter stressed.

The money was actually given by the British to the Turkish Cypriot community for restoration purposes to make up for the “low” rents they had been charging while in control of Evkaf properties, he explained.