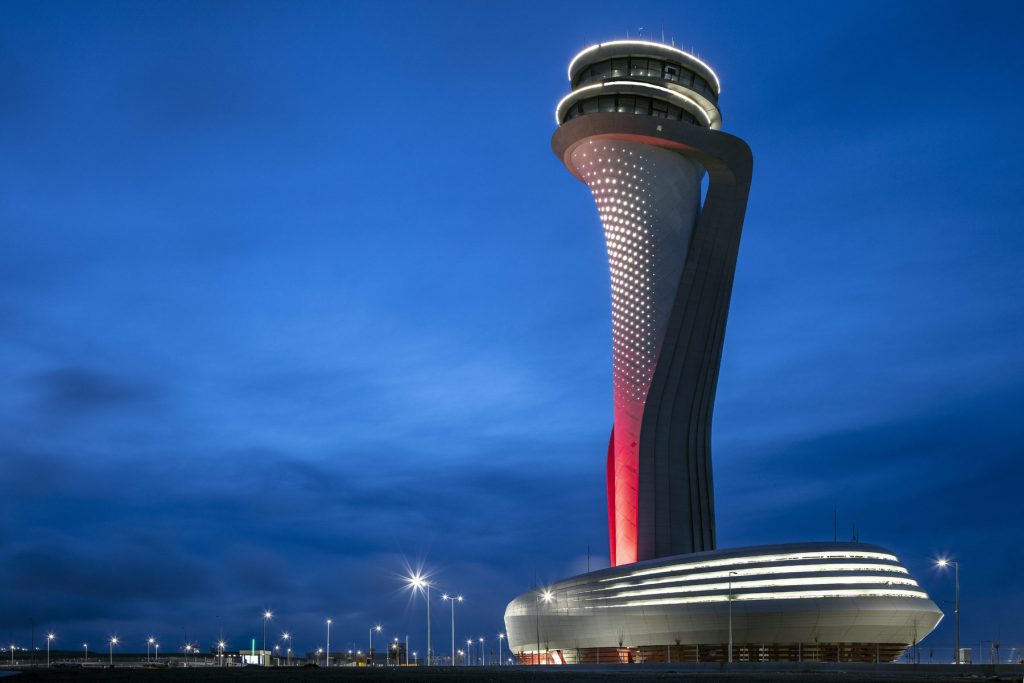 On 5 April, the world witnessed the single biggest move in aviation history. Dozens of aircraft, each weighing 44 tons, and 10,000 pieces of equipment weighing approximately 47,300 tons were transported on five thousand trucking rigs from Atatürk Airport to Istanbul Airport. Less than 48 hours later, Istanbul Airport was formally open for business, while Atatürk Airport, operational since 1953, was retired from commercial use.

The new airport, managed by the IGA consortium of companies, had its grand opening on 28 October 2018, in a ceremony presided over President Recep Tayyip Erdoğan himself. While the fanfare sounded, in essence this was a soft launch for an airport servicing limited flights for the next six months.

Since April, over 10 million passengers have used Istanbul Airport and IGA have ambitions to make it the world’s biggest. IGA Chairman of the Executive Board and CEO Hüseyin Kadri Samsunlu told T-VINE:

“Turkey has been one of the fastest growing aviation markets in the world, with roughly 10% annual growth in the last ten years. In 2018, over 210 million passengers, including transit ones, used Turkey’s airports, marking an 8.6% increase from the previous year.”

As a hub between Africa, Asia and Europe, Istanbul remains a key strategic location for air travel. The city is just three hours from 60 countries and 130 destinations, which are home to 1.5 billion people. IGA plans to tap into this potential, with its first target firmly set on making Istanbul Airport the biggest transit hub in the region.

Mr Samsunlu said: “Currently, Istanbul Airport has 1,288 flights daily – 354 domestic and 934 international – with a yearly capacity of 90 million passengers. We are still at the first phase, servicing 300 destinations and nearly 100 airline companies. Our plans are for the airport to grow gradually.

“By the fourth phase, we expect to be the world’s busiest airport based on passenger traffic, annually transporting 200 million passengers.”

Istanbul Airport may also end up becoming the world’s busiest based on aircraft movements: landing and take-off. The airport boasts six landing fields, two terminals and one terminal building.

“In time, we intend to have 3,500 flights a day,”Mr Samsunlu told T-VINE. Again, the airport to beat is Atlanta with a record-breaking 2,700 flights per day.

Other major features are the airport’s car parking facilities, cargo section, and retail area. Istanbul Airport already claims to have the largest indoor car park in Europe, with room for a whopping 18,000 vehicles; the airport’s total carpark capacity is 40,000. Its cargo zone will grow to cover 1.39 million square meters, offering an annual capacity of 5.5 million tonnes and berths for 42 cargo planes.

Situated 30 minutes from the city centre in Arnavutköy district, on the European side, Istanbul’s third airport is set to make a vital contribution to the Turkish economy. The Centre for Economics and Foreign Policy Studies [Ekonomi ve Dış Politika Araştırma Merkezi, or EDAM] calculated the economic returns in a 2016 report, estimating that Istanbul Airport could provide either direct or indirect employment for 195,000-225,000 people by 2025, generating around $4 billion in domestic earnings. The same report predicts the airport will provide up to 5% of Turkey’s national income. 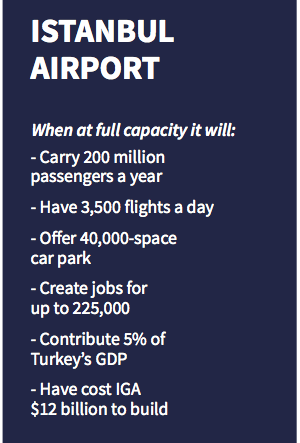 Quoting the report, CEO Hüseyin Kadri says an expanding Istanbul Airport will also enlarge Turkey’s tourist, logistic and other economic sectors: “These types of mega projects are bound to have an important and positive impact on local people and firms, creating an opportunity for higher trade volumes”.

IGA is expected to invest a total of $12 bn in the airport by the time the project ends. Of this, 1.2 billion TL (over $200 million) has gone into developing  the Duty Free area, which covers some 100,000 square meters, and provides employment for nearly 3,000 people.

Along with retail therapy, passengers can feast in a wide variety of food and drink outlets, occupying almost a third of the total rentable space, some 34,000 square meters, which may well make it the world’s largest food and drink area under one roof.

“Millions of passengers pass these shops every month right after they complete passport control. In addition, we currently have 53 shops serving food and beverages – the number will keep increasing and is expected to provide employment for 1,300 people,”the IGA CEO added.

With so many firsts, Turks have been rightly brimming with national pride about their dazzling new international airport. Yet there has been no shortage of controversy too. In the run-up to last year’s opening ceremony, poor working conditions and worker deaths made international headlines.

The government had claimed back in February 2018 that just 27 workers had died since construction began in 2015. Others put work-related accidents as high as 400: protestors dubbed the site “a cemetery”. Up to 500 people were arrested for protests over conditions, say trade unions, further damaging the airport’s reputation. But with subcontracted staff downing tools, threatening the airport’s October ceremony, IGA insisted suppliers improve pay and conditions for all workers.

Environmentalists have also been highly critical of the choice of location for the mega airport. Bordering the Black Sea, the area was largely forest and wetland before construction began. Activists claim up to 2.5 million trees have been chopped down, not only negatively impacting the region’s ecosystem, but also air quality for Istanbul’s 16 million residents. Moreover, the airport sits on a vital bird migration route, used by hundreds of thousands of birds, posing greater risks to aircraft from birds flying into a plane’s engine or windscreen.

While it is too late to save this natural habitat, IGA says it does take environmental concerns seriously. In 2016, it became Turkey’s first company to obtain an ISO 14001 certification for its Environmental Management System. The international standard aims to reduce the environmental footprint of a comp

any: to receive certification, firms must pass strict criteria on sustainability, efficient use of resources and waste reduction.

Other complaints centre on the airport’s remote location northwest of Istanbul, which lacks public transport links, unlike Atatürk Airport which was commutable by tube. The new airport will link up to the underground in 2020. Meanwhile, many passengers face higher taxi costs, partly because drivers are unable to find a return fare – taxis are forbidden to loiter by the terminal looking for new customers, and there is nothing locally for miles around the airport.

Thankfully, one vital transport link is working: Havabus – the airport shuttle service, which has significantly broadened its service to the new airport. Previously, its shuttles for Atatürk Airport were only to Taksim and Kadıköy. It now covers Sarıyer, Beşiktaş, Esenler Bus Garage, Bahçeşehir/Başakşehir, Beylikdüzü and Sultanahmet, with one-way tickets costing just 20 TL.

Flying back to London at the end of April, I had a chance to experience first-hand this incredible new airport. From the impressive drop-off point for passengers to the stunning interior of the terminal building, and the vast expanse of space, Istanbul definitely has the ‘wow’ factor.

Confusion reigned though with staff and passengers alike still getting to know the space. However, there was a palpable buzz everywhere.

After meeting a friend flying to Dubai at Carl’s Jr (an American burger joint) overlooking the enormous departure lounge, I went for a shop in Duty Free. I remarked to the cashier serving me about how good the new airport was. He replied, “For sure! It’s about time Istanbul had such a spectacular airport – the city really merits it”.