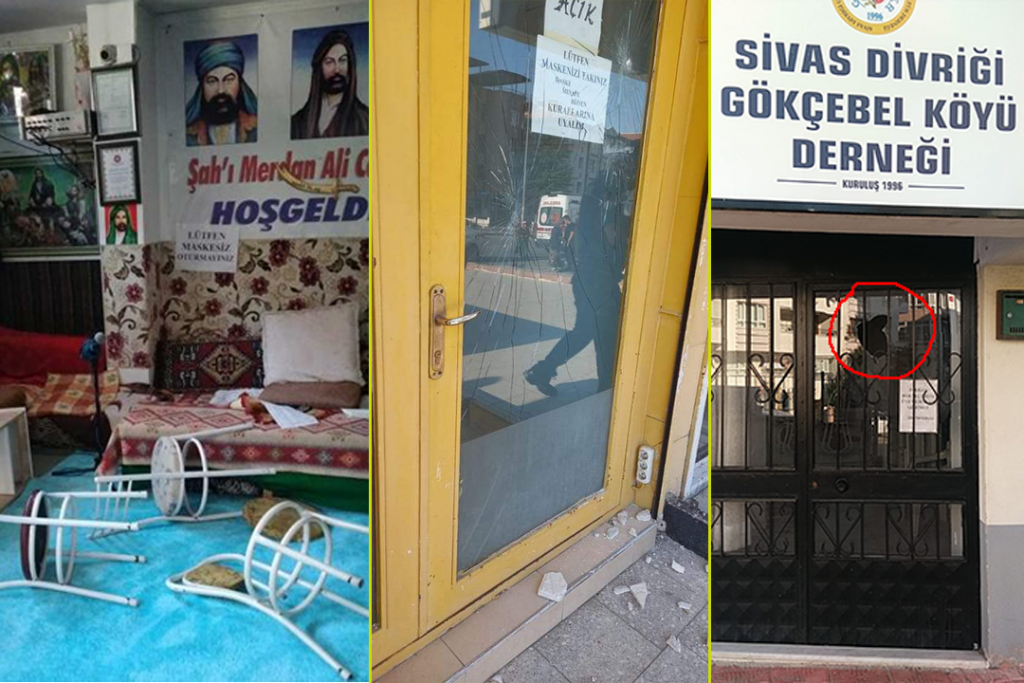 A woman was stabbed and multiple Alevi houses of worship (‘cemevi’) and association buildings in the Turkish capital Ankara attacked and vandalised on Saturday, 30 July.

The injured woman was on duty at the Turkmen Alevi Bektashi Association when a man came to the door asking if she was an Alevi and where they prayed. She informed him that the cemevi was on the floor above, but there was no worship that Saturday. The assailant then kicked the woman and knifed her when she fell. He quickly ran off when she screamed. The woman was rushed to hospital for treatment.

The attack was one of five separate incidents that all took place on Saturday afternoon. The Şah-ı Merdan Cemevi and Ana Fatma Cemevi, and the Tuzluçayır Democratic Alevi Associations, and Gökçebel Village Association were also targeted.

The attack at Ana Fatma Cemevi was caught on camera, and showed a man throwing chairs from the back of the room with full force towards the middle area around which people were seated for worship. In other venues, doors and windows were smashed.

The attacks came on the first day of the holy month of Muharrem, when Alevis commemorate the killing of Imam Hussein during the Battle of Karbala in 680 AD. Hussein is the grandson of the Muslim Prophet Muhammed and a central figure in the Alevi faith.

Three suspects have been arrested by police so far. Initially, the Ankara Police Department had said a single person was responsible for all the attacks, but that was quickly disputed by eyewitnesses, whose descriptions of the attacker at each location varied, suggesting more than one person was involved.

“Your approach, which fails to recognise cemevis [as a house of worship] and grant them constitutional status, and subjects Alevis to all kinds of inhumane assimilation policies, belittling and degrading them, have prepared the groundwork for attacks such as this,’’ said the chairman of the national Alevi Bektaşi Federation Mustafa Aslan during his speech at a protest against the attacks on Sunday.

Around one in five people in Turkiye are of the Alevi faith, making it the country’s second biggest religious group after Sunni Islam.

While there are some similarities between the two beliefs, there are also major differences, yet successive Turkish governments have failed to acknowledge Alevism as a faith, preferring to treat it as a cultural sect of Islam.

Alevis insist their faith be given the same legal status as other minority faiths in Turkiye such as Christianity and Judaism. Without this, Alevis are deprived of state protection and also financial support for costs such as energy bills.

In March of this year, an opposition party MP introduced a new bill to give cemevis legal status as houses of worship. CHP lawmaker Özgür Karabat said at the time that some 100 draft bills had been presented to the Turkish Parliament since AKP came to power in 2002 in an attempt to give cemevis the same legal status as mosques, but none of the bills had succeeded in becoming law.

A 2020 report published by the İnanç Özgürlüğü Girişimi (Freedom of Belief Initiative), which monitors and advocates for greater freedom of thought and religious belief in Turkiye, found that over half of all religious hate crimes that year were against Alevis.

Historically, Alevis have been repeatedly subjected to violent attacks and sometimes deadly pogroms. This includes a massacre in Kahramanmaraş in 1978 that left over a 100 people dead, and an arson attack at the Madımak Hotel in Sivas in 1992, which was hosting an Alevi intellectual and cultural event at the time. The local authorities failed to respond to the fire, which killed 34 people.

Main image, top, of the aftermath of the attacks on cemevis in Ankara on Saturday, 30 July 2022, taken from Pirha.org