To celebrate ‘19 Mayıs’ Atatürk, Youth and Sports Day, the Turkish Community Football Federation (TTFF) is hosting a huge football tournament in Wood Green on Sunday, 23 May, and “everyone is invited!”, says TTFF President Osman Ercen.

Each game is fifteen minutes long – two halves of 7.5 minutes – played as a seven-a-side, with up to 6 substitutions per side.

The tournament, sponsored by Les Ambassadeurs Hotel, Kyrenia, is free to attend. “All spectators will also be offered a complimentary doner wrap and drink,” Mr Ercen told T-VINE Magazine.

TTFF is one of the British Turkish community’s oldest and largest associations. Formed in 1976 with 12 founder member football clubs, it now represents thousands of players and dozens of clubs through its ever-expanding structure.

Currently TTFF has two adult leagues, U16 and U14 youth teams, and veteran (over 35 and over 45) sides. It is also cultivating teams for women and girls.

Every 19 May, the people of Turkey commemorate Mustafa Kemal’s landing at Samsun, on the Black Sea, on 19 May 1919, which marked the start of the Turkish War of Independence. 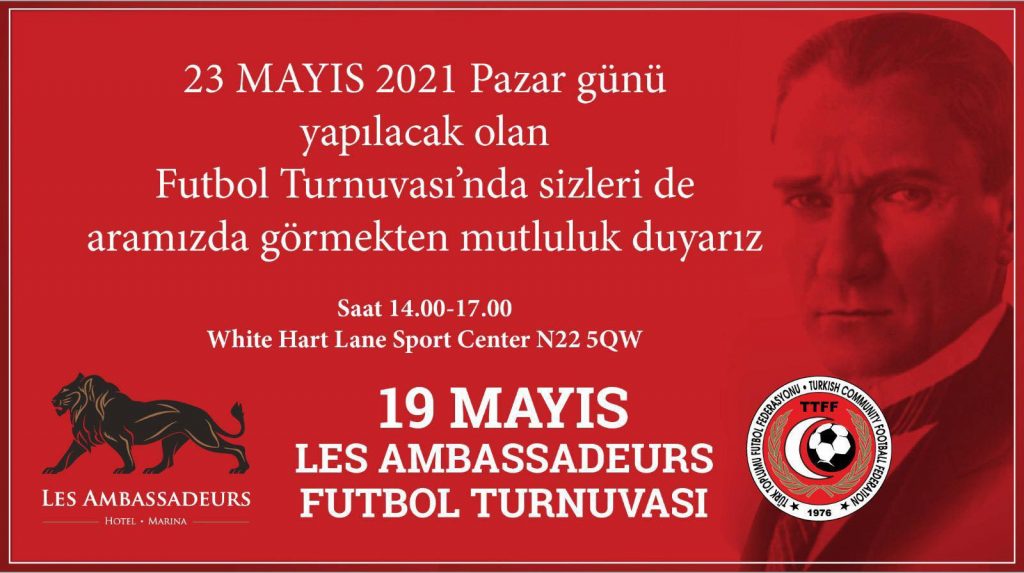