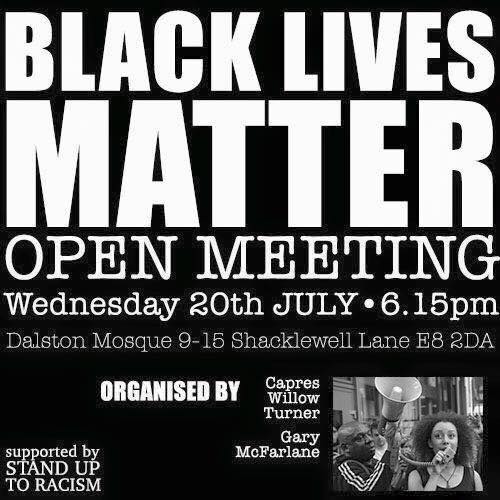 The UK’s oldest Turkish mosque is hosting a meeting for the Black Lives Matter (BLM) movement in London. The event, taking place at Shacklewell Lane Mosque, Dalston, on Wednesday evening is open to all.

Speaking at the event will be journalist Gary McFarlane and 18-year-old student Capres Willow, who have been involved in other recent BLM demonstrations in London, including the 3,000-strong protest march that closed down Oxford Street last Sunday. It is being supported by national anti-racism group Stand Up To Racism.

People in Britain, like others around the world, were deeply disturbed to see Philando Castile and Alton Sterling, two African-American men, executed by police in recent weeks in Minnesota and Louisiana.

Their killings prompted huge protests across the US under the Black Lives Matter banner, a movement which first started in 2013 following the shooting of black teenager Trayvon Martin in Florida. Since then dozens more African-Americans have been killed by US police, with little or no justice for their families.

Although British police in the main do not carry guns, there have been many suspected unlawful killings by them with little accountability to date. Inquest, a charity monitoring BAME (black and minority ethnic) deaths in police custody found 153 BAME Britons were killed in police custody or shot between 1990 and 2015.

On Wednesday night a black teenager, Mzee Mohammed, died in the custody of Merseyside Police. Following the incident, the police force has referred itself to the Independent Police Complaints Commission.

In an interview with the Evening Standard, Capres said: “Because we are pro-black, it does not mean that we are anti-white. We’re just so concerned at the moment because black lives are being lost en masse … One girl was carrying a sign that said ‘You don’t have to be black to be outraged.’”

Capres’ view is shared by Erkin Guney, the chair of the Board of Trustees at Shacklewell Lane Mosque, who was himself a victim of a miscarriage of justice in one of the worst cases of police corruption documented in Britain.

Erkin told T-VINE: “Injustice anywhere is injustice everywhere. Yes all lives matter, but what’s happening to the black community [here in the UK and USA] needs immediate action. Our mosque is home to a diverse community and we don’t tolerate any racism, that’s why we are happy to open our doors to the organisers. I urge everyone to come and show their support on Wednesday.”