Coup attempt put down in Turkey 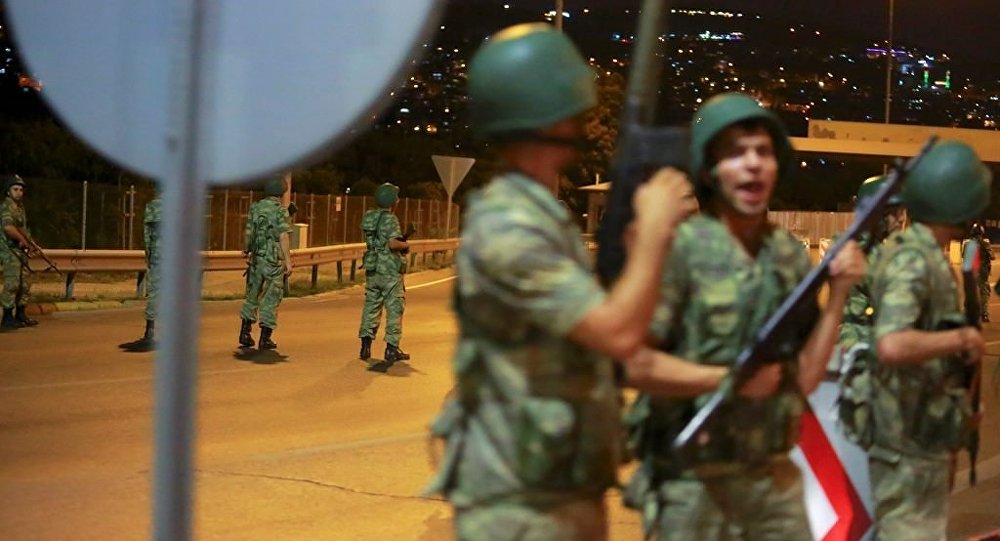 Efforts by a small faction of the Turkish military to topple the AKP government have failed. At least 194 people were killed in the attempted coup, which started on Friday evening when tanks and troops took up positions over Istanbul’s two Bosphorus bridges and at Istanbul Atatürk Airport.

Soon after, troops raided national broadcaster TRT, forcing TV presenter Tijen Karaş to read out their statement, which was also broadcast on Turkey’s other TV channels.

The coup faction said a “national peace council” was running the country, and a curfew and martial law was in place. People were ordered to stay at home, as the group set about restoring “constitutional order, democracy, human rights and freedoms”, claiming the current government had eroded the country’s democracy and secular rule of law.

The peaceful coup soon turned bloody as President Recep Tayyip Erdoğan called on the people to take to the streets to preserve their democracy. Thousands heeded his word. Mosques across the country turned on their lights and sela prayers (said when someone dies) could be heard.

Gunfire and explosions were heard during the night in Ankara, Istanbul and elsewhere, as troops and police loyal to the government, along with ordinary members of the public, challenged the coupists.

Among buildings to be attacked were the new Turkish presidential palace, Istanbul police headquarters, and the Marmaris hotel where the President had been staying. The Turkish parliament was also bombed and badly damaged. Some 100 MPs inside the building took shelter in Parliamentary bunkers. Fierce fighting also took place in and around Taksim Square.

This morning, it appears the coup forces have lost control of almost all key government, military and private buildings they had occupied the night before.

A statement by Ümit Dündar, deputy Chief of Staff said that 104 of those killed were coup plotters, 47 civilians, 41 police officers and two soldiers. At least 1,563 have been arrested. Turkey’s Chief of General Gen. Staff Hulusi Akar, taken hostage during the coup, had been rescued. However, the fate of other top commanders held hostage remains unknown.

It is not known who was behind the attempted putsch. However, President Erdoğan was quick to blame a “parallel structure”, the phrase he regularly uses to refer to Fethullah Gülen, an influential Muslim cleric and former AKP ally based in the USA, who he accuses of fomenting unrest.

However, in a statement, Mr Gülen rejected any suggestion he was linked to last night’s events, saying he condemned “in the strongest terms, the attempted military coup in Turkey”.

All three Opposition parties in Turkey also condemned the coup. CHP leader Kemal Kılıçdaroğlu stated that: “As a people we suffered the dire consequences of coups in the past. We do not want to live through the same distress.”

HDP’s English Twitter account posted a message stating: “The HDP is opposed to any kind of coup under any circumstances and as a principle.”

As news of the coup unfolded, the Turkish President, his whereabouts unknown, used FaceTime on his mobile phone to contact several Turkish TV channels, including Ulusal and CNN Türk, to make a live televised address to the nation urging people to take to the streets to oppose the uprising.

Some hours later, when it became clearer the coup was failing, the President flew to Istanbul, where he was given a hero’s welcome by thousands of his supporters.

In a speech he made at Istanbul airport, Mr Erdoğan said: “What is being perpetrated is treason and a rebellion. They will pay a heavy price.”

The situation on Saturday morning remains confused, but most of those involved in the coup seem to have surrendered or been arrested. In one dramatic turn, hundreds of soldiers were seen walking away from their tanks on one of the Istanbul bridges with their hands up.

Other images emerging on social media this morning shows coup troops on the Boğaziçi (First Istanbul) Bridge being lynched. Members of the public were seen beating them, with several soldiers having their throats slit. 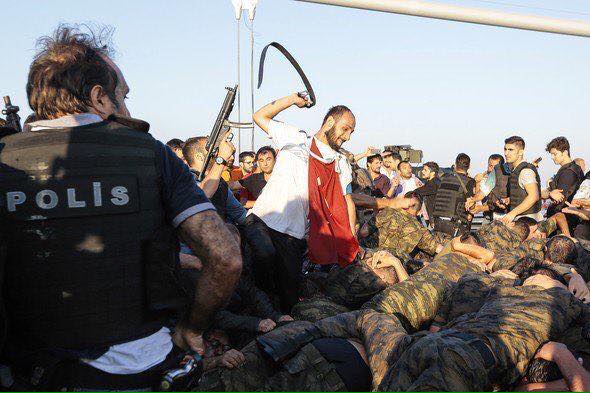 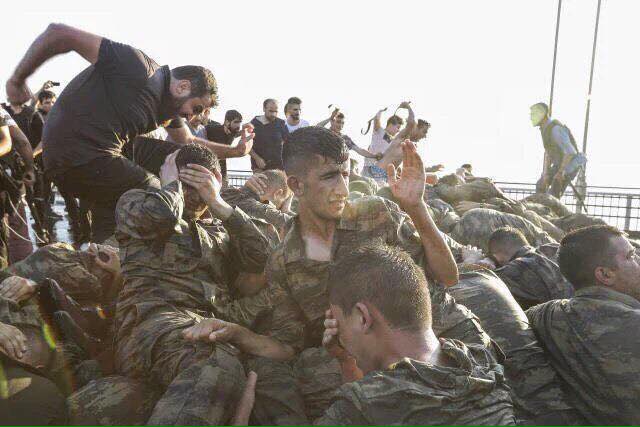 Britain’s new Foreign Secretary Boris Johnson said he was “very concerned about the situation unfolding”. He directed Britons to the Foreign and Commonwealth Office website, which advises “to avoid public places and remain vigilant” until the situation becomes clearer.

In a post on Twitter, a spokesperson for German Chancellor Angela Merkel said ‘the democratic order in Turkey must be respected’.

Earlier today, European Council President Donald Tusk said the country was “a key partner for the European Union” and called for a “swift return to Turkey’s constitutional order”.

Many other leaders and government ministers from around the world have voiced their concerns.

However, in a deeply polarised society, some Turks have also questioned whether this was indeed a real coup or a play for more power by Erdoğan and his AK Party. The sequence of events, the amateurish way in which the coup was executed, and the relative ease with which the Turkish government seized back control, along with the role of the mosques and the bombing of the Turkish Parliament – the bastion of Turkey’s secular democracy – have led some to believe there is a sinister undercurrent to last night’s events.

Well-known journalist Can Dündar tweeted about the beneficiaries of Turkey’s military coups, claiming last night’s attempt will carry Erdoğan to his intended goal of a Presidential system.

Turkey has a history of military coups, with four taking place in the past sixty years. The last military intervention came in 1997, resulting in the resignation of Prime Minister Necmettin Erbakan, who headed the Islamist Refah Party.

The military, the self-imposed guarantor of secularism in Turkey, has been brought to heel under the Islamist AKP government, although not without its controversies. The Ergenokon and Balyoz cases brought against leading military officers, jailed after being suspected of coup plotting, subsequently proved hollow as the evidence used to convict them was found to be forged.