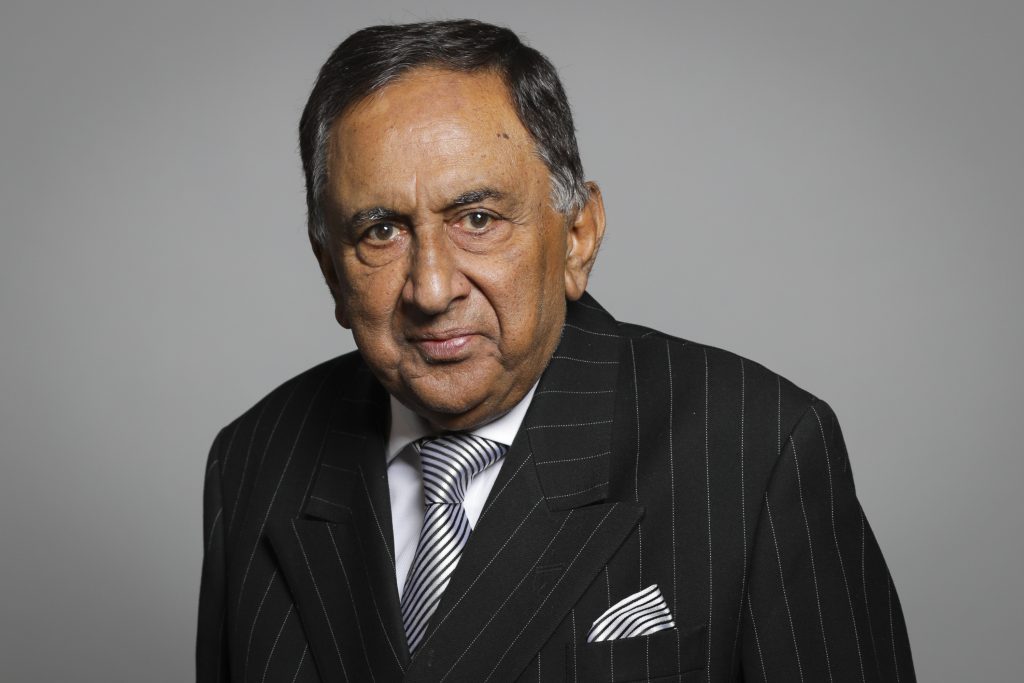 The death of Lord Mohamed Iltaf Sheikh has been described as “a huge loss” by Turkiye’s most senior diplomat in Britain. In a statement to T-VINE, Ümit Yalçın, the Turkish Ambassador to London, said: “Lord Sheikh’s passing is a huge loss in terms of his selfless contributions and service to the values he upheld.”

The pioneering British Muslim peer and co-chair of the All Party Parliamentary Group on Turkiye died last month aged 81.

The Turkish ambassador said, “Lord Sheikh’s valuable efforts for Türkiye-UK relations, as well as his parliamentary work on ethical and humanitarian values will live on as his legacy.”

“Beyond his devotion to the friendly  ties between our nations, Lord Sheikh was a kind and dear personal friend whose void cannot be easily filled,” Ambassador Yalçın added.

“Lord Sheikh was an esteemed member of the APPG for the TRNC, a very close friend of our country and a strong supporter of the Turkish Cypriot people’s just cause,” said Ambassador Keskin, adding, “I would like to express my sincere condolences to his family and loved ones on his sad demise. Our thoughts are with his family and colleagues.”

From rags to riches

Of Punjabi ancestry, Lord Sheikh was born in Kenya, then known as British East Africa, in 1941 and was raised in Uganda. He was forced to flee to Britain with his family in 1972 after despotic Ugandan leader General Idi Amin expelled all Asians from the country. The family, like many other immigrants, arrived in Britain without any money or assets, and were forced to rebuild their lives from scratch.

“We arrived here penniless. General Idi Amin took everything from us, except what we had in our minds. Because we were doing very well in Uganda, we came here and we were prepared to work hard.

“What we did in this country, was perhaps what we had learned in Uganda and that is to use our brains, to use our initiative, work hard, and we have done very well,” Lord Sheikh said about his early days in Britain.

His father had been a wealthy trader in coffee and cotton, and had also invested in property. That entrepreneurship seeped into his son, who started working for an insurance broker called Camberford Law, which he ended up buying.

Lord Sheikh’s bold business steps saw the firm grow to serve 1,800 brokers and become a public listed company. At its peak, Camberford Law won 12 major industry awards in a period of three years. He went on to become chairman and chief executive of Lloyd’s Brokers.

Made a life peer in 2006 with the title Baron Sheikh of Cornhill, Mohammed Sheikh used his new role to increase the prominence of Muslims and worked hard to integrate them more into British society. He was also active in bringing together Britain’s diverse ethnic and religious groups, and deepening relations between Britain and its allies abroad.

The peer was a visiting lecturer at various universities and sought to improve educational, cultural and commercial ties between the UK and other countries.

A friend of British Turks

He founded and co-chaired the All Party Parliamentary Group (APPG) for Islamic and Ethical Finance in British Parliament. He was also the co-chair of the APPG on Turkiye and the APPG for the Prevention of Genocide and Crimes Against Humanity.

Separately, Lord Sheik was vice-chair of the APPGs on Bangladesh, Sri Lanka, Nepal, Kazakhstan and Tajikistan. He was also a long-standing member of the APPG TRNC and a firm friend of the British Turkish Cypriot community.

In 2014, Lord and Lady Sheikh attended a talk by TRNC business mogul and education entrepreneur Dr Suat Günsel at the British Parliament. After listening to Dr Günsel’s inspirational talk about overcoming the TRNC’s isolation to create Cyprus’ biggest higher education establishment, Near East University, the British peer expressed his desire to help end the educational embargoes on North Cyprus.

A published author, Lord Sheikh’s books included ‘An Indian in the House’, about the first four Indians who became members of the British Parliament. He was working on his third book, a historical novel, at the time of his death.

Philanthropy is central to the Muslim way of life, and it was also integral to Lord Sheikh, who devoted considerable time and money to charitable causes. He was patron to various organisations, including the charity Orphans in Need.

He also established Sheikh Abdullah Foundation, named after his father, which gives grants and charitable donations to groups and individuals involved in education, poverty relief, conservation, and improving wellbeing, especially those supporting people with disabilities.

Lord Sheikh was a founding member and chairman of the National Muslim War Memorial Trust, to ensure the role of Muslim soldiers as part of the British Empire during the two world wars and in conflicts since, is not forgotten.

He was also outspoken on Islamophobia. In 2018, the Tory peer rebuked Boris Johnson for his offensive comments that compared women in burqas to letterboxes, and called for the whip to be withdrawn from the London MP.

“Take the whip from him. Why not? He’s not a super human being, he’s a member of the party. The party chairman, the prime minister has the right to take the whip … that’s the thing I’d like to see,” he told the BBC’s Newsnight programme.

Writing on the National Muslim War Memorial Trust (NMWMT) website, businessmen Mohammed Amin MBE said: “I was first introduced to Lord Sheikh in June 2006. Since then, we worked very closely together with regard to the Conservative Muslim Forum, NMWMT and other occasional voluntary projects. He was totally committed to serving the whole community, and gave of his time and money selflessly. I will never forget him.”

A resident of Southgate, North London, Lord Sheik’s funeral took place at Croydon Mosque and Islamic Centre on Friday 23 September – the day after his death – and he was laid to rest at Greenlawn Memorial Park in nearby Warlingham, in Surrey.

T-VINE editor said: “Lord Sheikh was a remarkable and inspirational man, who shone a light on many communities, including the British Turkish and Turkish Cypriot communities. His friendship and support will never be forgotten. We extend our heartfelt condolences to Lady Sheikh, the late Lord Sheikh’s family and friends. May he rest in eternal peace.”