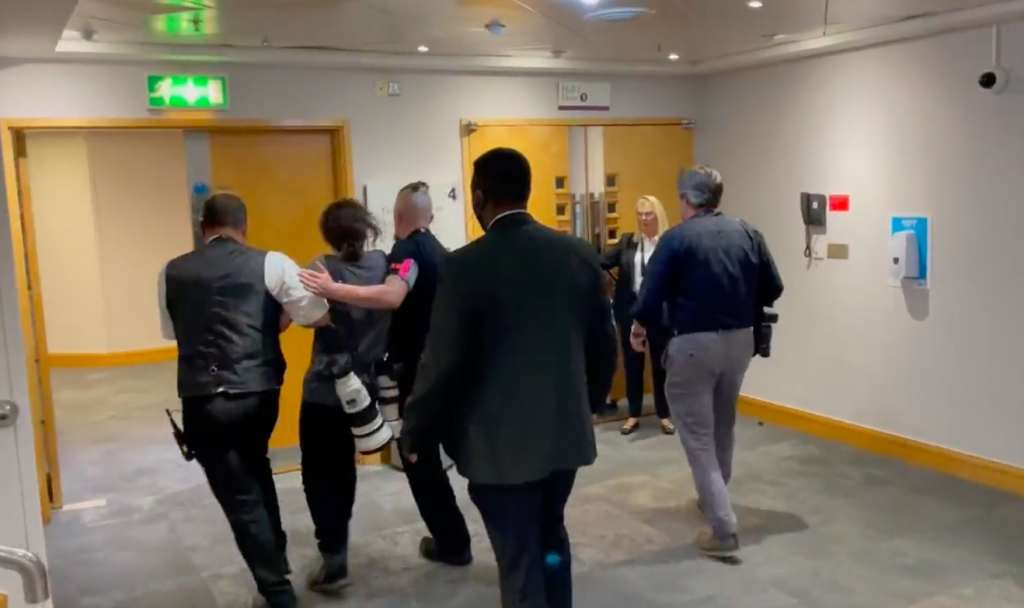 The Conservative Party has been criticised after its security staff forcefully ejected Tolga Akmen, a staff photojournalist at European Pressphoto Agency (EPA), from the Conservative party conference despite him having a press pass.

The moment was captured on video, which was posted on social media, drawing widespread condemnation. The short clip shows Akmen being forcibly dragged by two men, as they tell him he was being “aggressive” to which Akmen responds: “I’m a member of the media. Can you stop this please?

In an interview with the PA news agency, Akmen said the incident occurred on Wednesday morning just as he was getting ready to photograph the Prime Minister Liz Truss give her keynote speech at International Convention Centre in Birmingham. Akmen had just photographed Truss as she made her way to the venue and was himself trying to get in the venue with his colleages.

Akmen told PA he had been “thrown out” in the rain without his equipment and jacket, which was later recovered and returned to him by security.

“There was no need for manhandling. We could have talked about it. I didn’t try to get in where I wasn’t allowed to.

“I don’t see anyone else being told off and I do not know why they picked on me. I happen to be someone who argued back, and they don’t [take] kindly to that.

“We should have access and are accredited media. I showed them my press card. I have never had anything like this happen in my life,” Akmen said.

The 31-year-old award-winning photographer explained that the incident began when he showed his press pass to security and tried to enter via one entrance, but was refused access.

The staff photographer said as he and his media peers walked towards another entrance, he overheard a security guard radioing his description, saying he had been acting “aggressively and needed to be stopped”.

Tolga Akmen manhandled at the Tory party conference in Birmingham

A photographer has just been dragged off the conference centre floor by security. pic.twitter.com/iKlFC0psSs

The incident quickly escalated and Akmen was thrown out of the building by security staff. Broadcast media producer Dino Sofos was among the first to share details of the incident on Twitter. The clip has been viewed over a million times, and generated hundreds of critical comments about the behaviour of the security staff, along with messages of solidarity for Akmen, while others shared his photographs to underline the mistake the venue’s security had made.

Among those to hit out at the behaviour of the venue security was Gordon Mc, who tweeted: “Wow! This is where the extremist tories are dragging the country. A well renowned photographer @TolgaAkmen is roughly manhandled out of the conference hall by tory hard men. Shameful and shocking.”

Jamie Marzella wrote tongue-in-cheek, “That photographer is a well known dangerous subversive!! His work speaks for itself”, adding Tolga Akmen’s photos of the late Queen and the Princess of Wales to his tweet.

That photographer is a well known dangerous subversive!! His work speaks for itself. pic.twitter.com/dSyvfQ5BSO

EPA later tweeted a statement sent to them by the Conservatives, claiming the manhandling incident was due to a “misunderstanding”.

“We are aware there was an incident earlier today where a photographer was removed by venue security staff. We believe there may have been a misunderstanding and have been in contact with the photographer.”

Akmen confirmed Conservative campaign headquarters had been in touch to apologise, but he had yet to receive a formal apology.

Who is Tolga Akmen?

Originally from Turkiye, Akmen came to Britain over a decade ago to study. He graduated from the London College of Communication with a First Class BA (Hons) Photojournalism degree in 2013.

His stunning photography earned him numerous commissions as a freelancer, and he decided to stay and forge his career in the UK.

Akmen has gone on to work for leading news agencies such as Agence France-Presse (AFP) and London News Pictures. His portfolio includes members of the Royal Family, senior British and international politicians, from Theresa May to Donald Trump, with his images regularly featuring on the front pages of UK dailies such as the FT and The Times, and in newspapers all around the world.

A selection of Tolga’s work below

Very honoured to be one of the three nominees for News Photographer of the Year award. It’s incredible to see my name with giants like fellow @afpphoto colleague @oliscarff and @tobymelville of @reuters. Also thank you for continuing support from @CanonUKandIE and @JakkiMoores https://t.co/k7SBpikVfY pic.twitter.com/EBEz5t1uzA

Main image, top, of Tolga Akmen being forcefully ejected from the venue, is taken from clip in Dino Sofos’s tweet