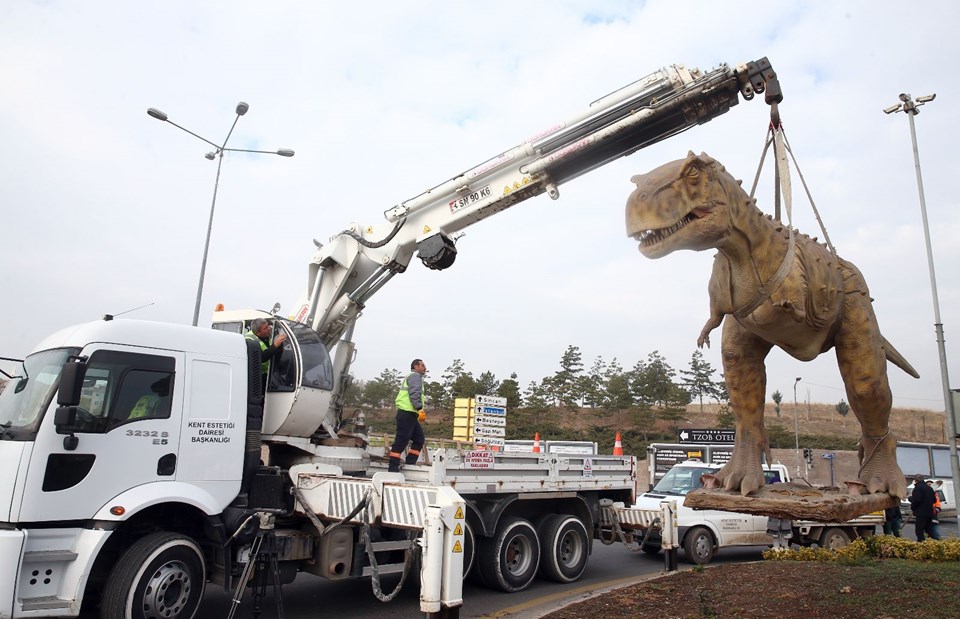 Ankara’s largest and most controversial reptilian resident was removed from public view this week on the instructions of the city’s new mayor Mustafa Tuna. A large dinosaur statue which had stood at a main road intersection in the Turkish capital since 2015 was quietly taken from its usual spot and placed into storage on Monday.

The disappearance of the prehistoric predator comes as part of Mr Tuna’s efforts to remove unusual symbols of the tenure of his colourful predecessor Melih Gökçek who served five consecutive terms in the role since 1994.

The dinosaur was brought in to promote Gökçek’s AnkaPark amusement park initiative, which he referred to as a “prestige project.” The former mayor erected several dinosaur statues as part of plans for the park, reportedly costing around 9 million Turkish Lira (about £1,730,000) before a court halted construction, ruling that the park was illegal after the Ankara Chamber of Architects objected.

Gökçek stepped down from his position in late October and is known for such stunts as chewing gum in front of former French President Nicolas Sarkozy, retaliating to similar behaviour from the then French leader when he was in Ankara in 2011.

The businessman turned politician had joined the Justice and Development Party (AKP) in the early 2000s and left his role at the request of party leader and Turkish President Recep Tayyip Erdoğan.

“I am a man of a cause and my cause includes following the orders of the leader,” said Mr Gökçek while resigning, this “cause does not include causing harm for personal gain,” he added.

Gökçek stepped down from office along with five more AKP mayors from cities in Turkey, including Istanbul’s long-serving mayor Kadir Topbaş and others from Bursa, Niğde, Düzce and Balıkesir. These changes come as the AKP starts to prepare for campaigning ahead of local and then presidential elections in 2019.

Analysts believe the party leadership has sought to rout out municipal heads who under-performed during last April’s executive presidency referendum that it believes could be an electoral liability. The Yes campaign which was supported by the AKP and the Nationalist Action Party (MHP) narrowly lost the vote in Istanbul, Ankara and Balıkesir, and won a tight victory in Bursa.

Mustafa Tuna, Gökçek’s replacement previously served as the mayor of Ankara’s Sincan district and was also a deputy for the capital in the Turkish Parliament. Tuna, 60, is set to introduce significant changes to the municipality. Earlier this month, he announced that 35 bus routes crossing nine of the city’s districts would continue operating on their usual schedules until 2 am and then provide an hourly service until 6 am. “Our aim is to create a city that is live 24 hours, alive and dynamic,” he told a meeting, also saying that local authorities would subsidise operating costs of nearly 300 journeys nightly. This is a notable development as the AKP has traditionally looked unfavourably upon nightlife, introducing legislation in 2013 limiting the sale of alcohol near mosques and schools.

Tuna also has a firm stance on animal rights. Speaking out at a meeting discussing the city’s 2018 budget, he said that selling animals in pet shops “should be regulated through law … It is inhumane. An animal is not a commodity, is not something like a pencil, book, [or a] shoe”.

The new mayor has also received words of support from Alper Taşdelen, mayor of Ankara’s Çankaya district and a member of the main opposition Republican People’s Party (CHP), who was photographed warmly embracing Tuna. Following criticism for the hug from CHP supporters on Twitter, Taşdelen tweeted “Ankara is fed up of fighting” which he associated with Mr Gökçek’s previous more confrontational stance.

Despite these early indications of positive change however, local officials have also ushered in new restrictions for some of the city’s residents recently. The Ankara Governorate enacted a ban on events by pro-Lesbian, Gay, Bisexual and Transgender (LGBT) rights groups, which started in mid-November.

“Starting from Nov. 18, 2017, considering public sensitivities, any events such as LGBT … cinema, theatre performances, panels, interviews and exhibitions are banned until further notice in our province, in order to provide peace and security,” said a statement from the provincial governor’s office according to Politico Europe.

Officials said the restrictions were enforced on grounds of promoting “public order, prevention of crime, general health and morals” amid concerns that such events might stir up animosity from other sections of society. The move came days after an LGBT film festival organised by the German Embassy and Pink Life Queer Fest was banned.