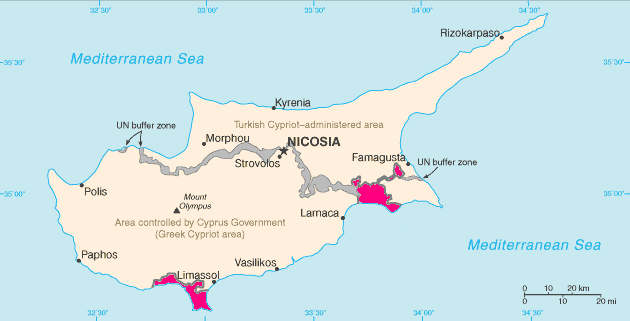 The Council of Turkish Cypriot Associations in Britain (CTCA UK) – the UK umbrella body for Turkish Cypriots – has requested community members to contact them if they own land on or around the British military bases, also known as the Sovereign Base Areas (SBAs).

The UK government recently launched a public consultation process to allow landowners in villages in or by the Akrotiri and Dhekelia military bases in Cyprus to comment on plans to redevelop part of the area.

The controversial plans were not discussed with the Turkish Cypriot side when first presented in 2014, with the UK only securing the consent of the Greek Cypriot leader Nicos Anastasiades.

When fully implemented, the plans will see a part of the two bases, approximately 18 square kilometres of the Bases’ 254 square kilometres, ceded to Greek Cypriots for residential and commercial use.

The change of status run counter to the terms of the 1960 Treaty of Establishment, which formed the Republic of Cyprus and the SBAs, which grant Britain use soley for “military purposes”.

The UK’s SBA consultation process, which runs until 14 July, allows landowners to comment on the environmental impact of the plans only.

The CTCA is seeking to ensure any Turkish Cypriots in Britain and in other overseas territory affected by this issue are aware of what is happening and their rights to feed into the project.

Those who hold land in the following villages are advised to contact Sonya Karafistan, who is the CTCA Secretary responsible for External Affairs, by email: sonya@ctcauk.com as soon as possible:

Full details of the UK SBA proposal can be found here.

“As the UK government chose not to discuss the issue with representatives of the Turkish Cypriot community, it means few will be aware of these developments. With the mid-July deadline looming, it’s vital anyone in the UK diaspora who is affected quickly contacts us, so we can give them up-to-date information and they can have their say too,” explained Ms Karafistan.

She added that the CTCA would be contacting the Foreign Secretary Dominic Raab and Stephen Lillie, the British High Commissioner in Cyprus, to air their unease about the failure to engage the Turkish Cypriot community, and ask why the British authorities seem to be ignoring the terms of the 1960 Treaty of Establishment governing Cyprus and the SBAs.

“The CTCA wrote to the Foreign and Commonwealth Office in 2014 criticising the lack of engagement with Turkish Cypriots. The FCO acknowledged this, but six years on they are still carrying on exactly as before, excluding Turkish Cypriots from all discussions. It is totally unacceptable,” said Ms Karafistan.

She further stated: “We are very concerned by the British Government’s selective adherence to the [1960] Treaty of Establishment. The creation of the SBAs was laid down in the Treaty, yet the British Government has chosen to ignore the fact that there are five signatories to the Treaty and any variation thereof should involve all five.

“The Treaty specifically requires the consent of both the Turkish Cypriots and the Greek Cypriots for any change in use to the SBAs, yet only Greek Cypriot approval has been sought. We believe there are important legal ramifications from the UK government’s failure to observe these vital terms.”

“The CTCA is equally concerned that the SBA Administration has not followed UK Government best practice guidelines on consultation,” Ms Karafistan added.

The decision to freeze out the Turkish Cypriot community from formal discussions about the future use of the SBAs have been slammed by the President and Prime Minister of the Turkish Republic of North Cyprus.

On 11 June, Prime Minister Ersin Tatar said, “Any step taken by Britain about the [Sovereign] Bases without the approval of the Turkish Cypriot people and its officials will not be valid.”