Art: exodus of Sephardic Jews from Spain to the Ottoman Empire told in 1492 Göke exhibition 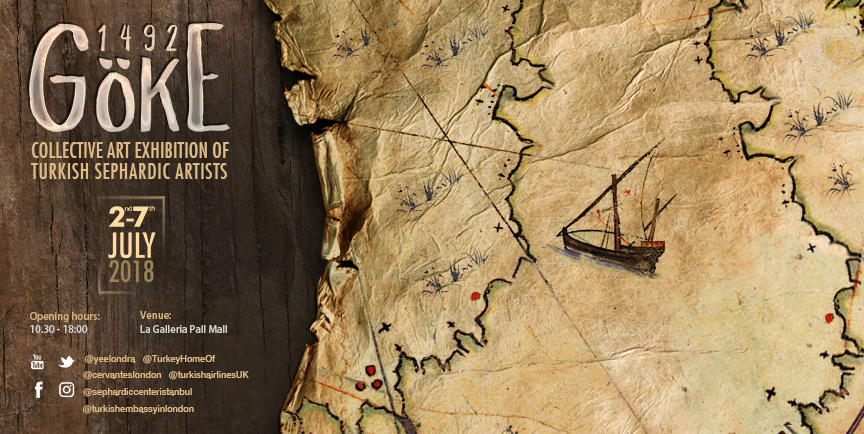 The 1492 Göke collective art exhibition of Turkish Sephardic artists will take place at one of the most prestigious contemporary art galleries in London – the La Galleria Pall Mall – for one week, between 2 and 7 July 2018.

Curated by Terry Katalan, it aims to be a cultural bridge between London and Istanbul, while highlighting the history and art of Sephardic Jews.

The Ottoman Empire allowed thousands of Jews to settle and establish new lives in its lands when the Spanish Monarchy forced them to leave Spain in 1492. Between 90,000 and 150,000 Jews and Muslims were carried from the Iberian Peninsula by Ottoman ships, of which Göke was the most famous due to its heroic captain, Kemal Reis. For over 500 years, the Sephardic people have embraced Ottoman and Turkish culture whilst not forgetting their Spanish roots, which is manifested through Turkish Sephardic art and culture.

Chief among those whose works will be on display at the London exhibition is internationally-renowned Habib Gerez, whose paintings have exposed Sephardic culture to the world.

The exhibition is organised by the Yunus Emre Institute in collaboration with the Turkish Embassy in London, and supported by Turkish Airlines, Turkish Culture and Tourism Office, Cervantes Institute, and the Turkish Ottoman Sephardic Research Centre.