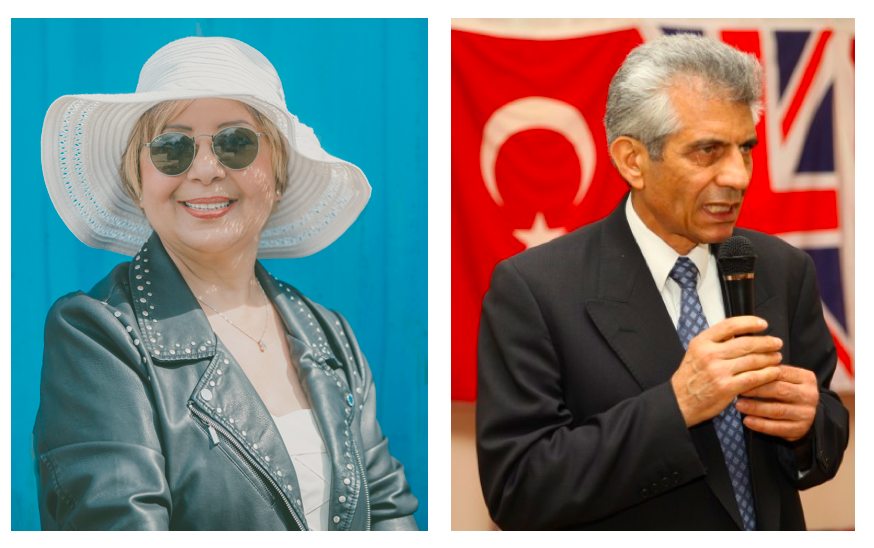 Two committee members of the Council of Turkish Cypriot Associations in Britain (CTCA UK) are standing in this Sunday’s election to become the body’s new President.

Ayşe Osman, a former chair of the Turkish Women’s Philanthropic Association (TWPA) and Ertuğrul Mehmet, formerly the chairman of Southgate Ataturk School and co-ordinator of the Turkish Education Consortium, will be presenting their credentials to members at the CTCA’s Annual General Meeting, which this year is being held at Grand Palace in Wood Green, North London.

It is the first time in over seven years that there has been an election for the position: all CTCA presidents since 2013 have stood unopposed. The term of an elected CTCA president is two years. They can stand for another term, as incumbent Leyla Kemal has done.

First elected in 2016, Mrs Kemal has presided a period of huge activity for the CTCA. Under her leadership, the organisation has launched Britain’s first major Turkish Cypriot Cultural Festival, which is now in its fourth year. She has also established the bi-annual CTCA Awards, which recognises the UK’s most successful Turkish Cypriots, and in 2017 she oversaw centenary celebrations for the community’s presence in Britain including an exhibition and film screening at the prestigious V&A Museum in central London.

During her term, Mrs Kemal has lobbied the TRNC authorities for the British Turkish Cypriot community to take back control of the D’Arblay Street, Soho, building, which has laid dormant for the past five years and is currently under the management of North Cyprus-based Evkaf (the Cyprus Islamic Trust). She has initiated the transition of CTCA into a charity, growing funds for two new buildings in North and Southeast London, to better serve the community.

Mrs Kemal has also led delegations to meet with British officials, including Sir Iain Duncan Smith and the then Transport Minister Chris Grayling, to try and overturn the UK-imposed disembarkation rule for all flights from Ercan to London, which has added time and huge inconvenience to passengers, especially the elderly, and those with disabilities and young children.

The CTCA and recent controversy

Established in March 1983, CTCA is the UK’s largest umbrella group for British Turkish Cypriots. The body’s website states it was founded “to give national representation to the UK’s 300,000-strong Turkish Cypriot community”, and “serves to empower the community through civic engagement, and to support strong UK-Turkish Cypriot relations through education and advocacy.”

The voluntary-managed umbrella body currently has 28 member associations, and states that it has been “at the forefront of promoting Turkish Cypriot culture and heritage, pursuing the interests of British Turkish Cypriots, strengthening the bridges between the UK and the TRNC, and lobbying the British government on matters of concern for the community, such as direct flights between the UK and North Cyprus”.

In recent years, CTCA has been embroiled in a spat with representatives of non-member organisations, most significantly the Turkish Community Football Federation (TTFF) and Turkish Cypriot Community Association (TCCA), which formed a rival festival and have accused Mrs Kemal of ‘divisive community politics’.

Mrs Kemal denies the allegations, and maintains she has been ‘the victim of a sustained and nasty campaign through the community press to undermine CTCA’s work and her personal standing’.

Arriving in Britain as a child in July 1964, Ayşe Osman left South Hackney School and College and went on to work for some of the UK’s most prestigious banks, including supporting the Executive Boards at the Bank of England and the Royal Bank of Canada. She also spent many years at record label CBS (Colombia Broadcasting Studios), and has also worked for the FSA (Financial Services Authority) and Fords.

In later years she worked in the marketing and sales department at London Turkish Gazette, before retiring in 2009.

An activist from a young age, she joined Kibris Turk Cemiyeti in 1967. Though now redundant, the organisation was Europe’s first Turkish association and played a critical role for the UK community when Turkish Cypriots were under siege in Cyprus between 1964 and 1974.

Mrs Osman has been an active TWPA member since 1971, and served in several committee roles including Event Organiser, Secretary, Vice Treasurer, and Chair. She represented TWPA at the Federation of International Women of England (FIWAL).

Other community work including as a management committee member of Turkish Cypriot cancer charity Pro Cancer Research (2001-2007), and as an active member of the British Turkish Women’s Aid Committee (BTKD) since its inception in 2002, when it was founded by the Turkish Ambassador’s wife Mrs Handan Haktanir, She has been on the CTCA Management Committee and its sub-group the CTCA Festival group since 2017, and has helped organise the body’s two Gala award nights, and V&A Museum exhibition.

She is a single parent with a grown-up daughter and son.

She told T-VINE she wants to see CTCA “better represent the UK Turkish Cypriot community, with greater focus on UK community matters”, and to help the umbrella body, “to grow and transition into a professionally-managed body.”

Born in Cyprus, Ertuğrul Mehmet came to Britain in 1970 at the age of 20. The high school graduate has undertaken various vocational courses in the UK, including a City and Guilds in electrical installation, marketing, translation, and is proficient in Sage accounting.

His working career started in a catering firm, where he was first employed as a washer up, before becoming a chef, waiter, manager, and eventually area manager. He left in 1975 to become a director and partner in an electrical company. Eight years later, he formed his own building company, adding a stake in two restaurant businesses (fish and chips, and kebab house) in 1988.

Mr Mehmet was able to retire in 1997 at the age of 48, and has since devoted his time to voluntary community works.

Between 1997 and 2015, and again from 2018, he has served on the Southgate Ataturk Turkish School Management Committee, two of these years as chairman. He was Secretary and later Co-ordinator of the Turkish Language Culture and Education Consortium (2003 -2015) and has had several stints on the CTCA Management Committee, most recently has Secretary (2019-2020), helping with the organisation of the CTCA Festival and Gala Awards night.

Married with two children and four grandchildren, he says his vision for CTCA UK is:

“I would like to see the CTCA UK to be respected by everyone in the community. Division between CTCA and opponents to be minimised and turned into cooperation by supporting each others’ good works.”

Sunday’s AGM, which starts at 11am, is open to the public, who will be able to hear about the CTCA’s UK work this past year. Current chair Leyla Kemal and her committee will present their activity and financial reports for approval. However, only CTCA members can vote in the election.

Each association has three votes, and past presidents have one vote each. Two-thirds of the 22 CTCA member associations must be present for the vote to be valid.

Dr Tahsin Bilginer, the Vice-President of the CTCA Disciplinary Committee, which is overseeing the election, told T-VINE:

“The AGM will be in English and Turkish as we are a bilingual society.

“We have two candidates standing [for President] this year – Ayşe Osman and Ertuğrul Mehmet. It is the first time in some years that we’ve had a race for the position. Voting will be by secret ballot.

“Once the new president is elected, they will present their new committee. They take over immediately from Leyla Kemal and her committee.”