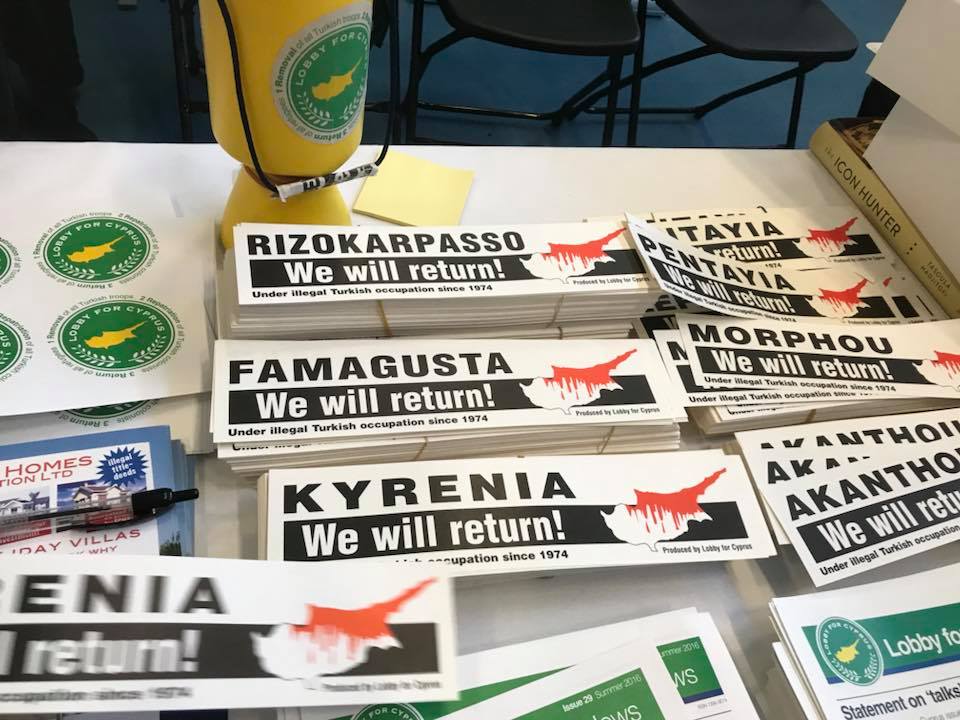 Organisers of the Cyprus Wine Fair in London say using the ‘Bloody Map’ of Cyprus is all part of their search for “a just and viable solution” to “reunite our island, and build a peaceful common future, away from the mistakes of the past”.

They are stoutly defending the fact that, once again, stalls at their annual fair used material displaying the now-notorious map, which shows blood dripping over Cyprus from the northern part of the island. Turkish Cypriots see it as a racist and deeply offensive reference to their rescue from Greek invaders by Turkish forces in 1974.

One fair-goer, Meric Batili, protested on Facebook: “Had not Turkey intervened, many thousands would have died and others would have been left fearing for their safety. If Turkish Cypriots cannot get together to organise against this blatant propaganda machine we will continue to be seen as the ones in the wrong.”

The anti-Turkish propaganda and offensive leaflets on display at the Cyprus Wine Festival were captured by Turkish Cypriot broadcaster Alp Ermiya, who visited the indoor event at Lee Valley Athletics Centre in Edmonton, North London, on 27 May. Posting photos on his Facebook page, he wrote in Turkish:

Alp Ermiya: “Is this actually a festival? Or is it a racist festival to condemn and put down Turks?”

“Today, I toured the ‘Cypriot [sic] Wine Festival’ organised annually by Greek Cypriots in Britain. To be faced with such stinking racist material at this festival in London – the world’s largest and most cosmopolitan city – has really upset me. It’s been years, but still this racism persists. It’s clear peace [in Cyprus] is getting more distant. Yet all songs in the world are written and sung about peace.

“If, as written in these slogans there is one Cyprus, for one side to be presented as solely guilty over missing persons…As racism is banned in Great Britain, I cannot understand how permission is given for such behaviour, you decide friends. Is this actually a festival? Or is it a racist festival to condemn and put down Turks?”

Ersu Ekrem, chairman of the British Turkish Cypriot Association, told T-VINE this week: “[Event organiser] Parikiaki, by its actions in the [Cyprus] Wine Festival, is not helping reconciliation attempts by the two communities – rather the opposite. They are carrying political and biased Greek Cypriot propaganda onto UK soil, and in doing so dividing two communities which have lived in peace here so far.”

“We condemn their actions, and will be writing to Haringey and Enfield Councils demanding to know why such hate-inciting elements are allowed to be displayed.”

Parikiaki CEO Bambos Charalambous, “this [Bloody Map] has nothing to do with racism”

Fair organisers Parikiaki – who describe themselves as a “serious Cypriot progressive newspaper” – deny that the map is racist, despite the many complaints posted by British Turkish Cypriots online. The North London based paper claims they even had Turkish Cypriot helpers, which did not object.

Responding to T-VINE’s questions about the issue, a letter from Parikiaki CEO Bambos Charalambous claims “In general, we are fighting against racism and inciting racial hatred…….but this [Bloody Map] has nothing to do with racism. It is clearly a humanitarian and political issue which all progressive Cypriots from both communities are fighting.

“Our objective is to find a just and viable solution, based on a bi-zonal, bi-communal federation, and on UN resolutions. In addition, the stand where the map was located was the Organisation of Relatives of Missing Cypriots, whose committee members are both Greek and Turkish Cypriots.

“The map you are referring to represents the pain, the thousands of deaths and bloodshed that Turkey’s invasion inflicted on Cyprus; a crime that continues to this day. It has nothing to do with our Turkish Cypriot compatriots who we believe are suffering the same.”

Fevzi Hussein: “Parikiaki could send a strong message that it stands by all Cypriots, by demanding the removal of the Bloody Map”

However, Fevzi Hussein, an official of one of the UK’s major trade unions and active on the issue of racism, questioned Parikiaki’s statement:

“The rise of the far-right is a huge problem in society and there is no doubt that the continued use of the Bloody Map causes many Turkish Cypriots a great deal of offence and upset. Parikiaki is a respected newspaper with well-known left-field tendencies, so it surprises me to see that they allow such material to be displayed at the Cyprus Wine Festival.

“To suggest that the map is an accepted symbol for Turkish Cypriots’ “pain” is disingenuous. Personally, I would love to see the day when Cyprus can again be reunited with Cypriot communities living side by side, just like we have done in the past.

“Parikiaki could, if it wanted to, send a strong message to the international community that it stands by all Cypriots, by demanding the removal of the Bloody Map.”

T-VINE invited local borough councillors of Turkish Cypriot heritage to comment on the offensive display. Haringey’s Deputy Leader, Labour Cllr Emina Ibrahim, was photographed with her leader and the Greek Cypriot High Commissioner, Mr Euripides Evriviades, and posted on social media that she was “proud to be at the opening of the Cyprus Wine Fair.”

Emina Ibrahim: “It’s not a state event there is no obligation for balance. We either choose to go or we don’t”

When we drew her attention to the insult felt by Turkish Cypriots on Facebook, she replied: “The High Commissioner gave a special welcome to Turkish Cypriots. If you mean the ‘Lobby for Cyprus “stuff, that’s there every year and is a stall best avoided.”

In response to Cllr Ibrahim’s comment, one Turkish Cypriot friend, Sheri Yusuf, posted that “The lobby [for Cyprus] should not be allowed – no politics full stop! Otherwise this festival only represents the Greek Cypriots”.

Cllr Ibrahim countered, “To be honest it is what it is. It’s a festival promoting Cypriot culture organised by Parikiaki which is the Greek Cypriot newspaper. It’s not a state event there is no obligation for balance. We either choose to go or we don’t. I have always gone because my mum took me and it became part of our annual calendar. She isn’t bothered by the fact that its [sic] mostly Greek Cypriot all she is interested in is picking up various delicacies. The vibe I get from most of the people who go is that they are not there to promote of support a particular political or ethnic agenda – just to eat lokma, shamishi, kebabs and see a celebration of culture and food. We shouldn’t over complicate people’s motives. If the organisers were Lobby or they were called to the stage to speak that would be a different story but it isn’t.”

The UK’s first-ever Turkish Cypriot Council Leader, Enfield’s Labour Councillor Nesil Caliskan, heads a body which borders the Lee Valley Regional Park. Enfield Council is represented on the board of the Lee Valley Authority, which governs the 10,000 acre site and is responsible for the Athletics Centre where the Cyprus Wine Fair was held this year. Although Enfield Council has over 20 Turkish and Turkish Cypriot councillors, Ms Caliskan and her fellow Turkish origin councillors have also declined to comment.

The lack of engagement on the issue from such high profile councillors drew criticism from the British Turkish Cypriot Association: “We are disappointed that none of the councillors with a Turkish background on the two councils have taken up this inappropriate and inexcusable act by the organisers of the Festival.

“Such festivals are meant to bring people together, and not divide them with political statements. We feel Parikiaki has done a great disservice in that respect to the people of both the UK and Cyprus.

“Although Parikiaki states that it sees Turkey’s 20th July 1974 intervention as “an invasion”, the overwhelming majority of Turkish Cypriots see it as a liberation from an unjust and brutal Greek Cypriot regime that had denied Turkish Cypriots their human rights, as well as their political rights under the 1960 Cyprus Independence Treaty, by forcing them into ghettoes and attempting genocide.”

In 2006, an advertising campaign in local press in North London by the National Federation of [Greek] Cypriots (NFC) drew a furious reaction from the Turkish Cypriot community for their use of Cyprus dripping with blood. The advert was used to promote the group’s annual 20 July rally in Trafalgar Square.

The Advertising Standards Authority received 93 complaints about the offensive advert, making it one of the ten most complained about adverts in Britain in 2006. Thousands more signed a petition calling for the Bloody Map to be banned entirely.

The complaints to the ASA were not upheld except for the challenge that it was insufficiently clear the ad was advertising material. However, the furore led to the NFC dropping the Bloody Map and instead adopting a new logo of Cyprus split through two shades of green, a move that was praised by the Turkish Cypriot community.

However, the right-wing Greek Cypriot Lobby for Cyprus group, whose stall was behind the anti-Turkish propaganda at the Wine Festival, persists in using the Bloody Map in its campaign collateral. The controversial organisation drew the ire of British Turks for similar inflammatory displays at the Cyprus Wine Festival when the event was held in Alexandra Palace. With no Greek Cypriot or wider political pressure for them to change, the group will continue to use such offensive material for the foreseeable future.

Main photo © Alp Ermiya of Lobby for Cyprus stand at the Cyprus Wine Festival, 27 May 2018