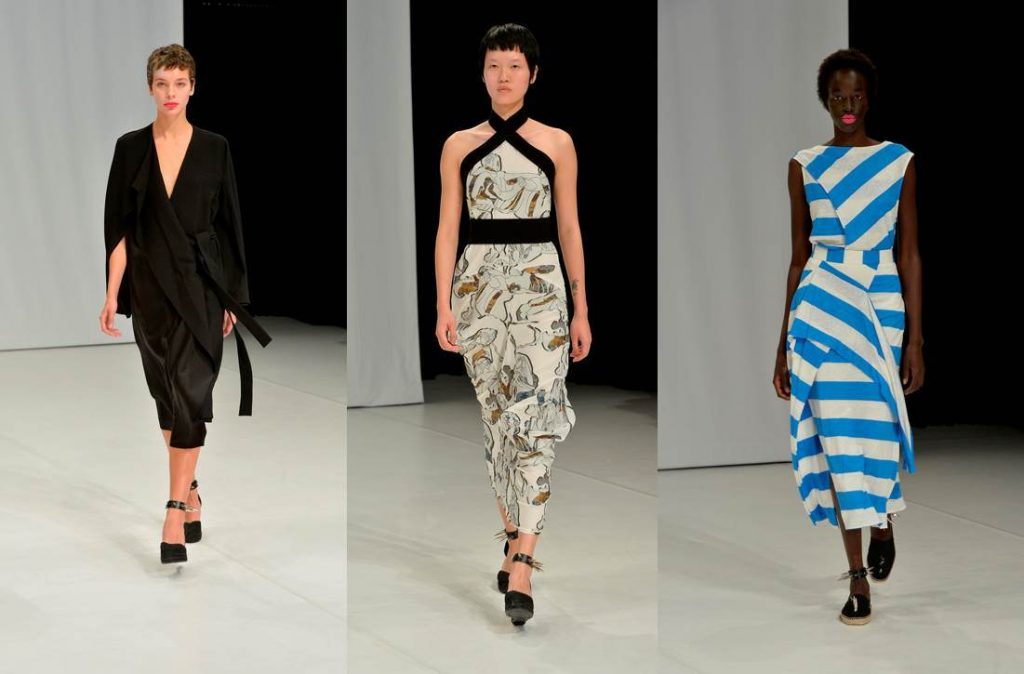 Hussein Chalayan’s shows are always one of the highlights of London Fashion Week (LFW) with their extraordinary qualities. So T-VINE takes a look back at the globally renowned fashion designer’s recent LFW show at Sadler’s Wells theatre on 16 September 2018.

Renowned for his art as much as his fashion creations, the London-based Turkish Cypriot designer once again used narratives around cultural identities in his Spring Summer (S/S) 2019 collection. Chalayan explored different meanings of happiness in different regions around the world.

Chalayan’s S/S 19 clothes were inspired by historic world events and variations in attitude on their respective continents. As with his men’s collection, Chalayan placed Ancient Rome as the epicentre of this world from which he sought to present an understanding of modern society.

He represented the expansionism of Ancient Rome through the Abduction of Sabine Women. This incident, which forms part of Roman mythology, sees the men of Rome carry out a mass abduction of young women from the other cities in the region. It has been frequently depicted by artists, particularly during the Renaissance and post-Renaissance eras. Modern day artist Chalayan also chooses this subject, relating it to today’s world events.

To reflect this Roman disaster in his collection, Chalayan displaced jackets on the body to simulate an attempted abduction. Irremovable volume details are also used to empower the wearer and prevent garments to be taken by someone else.

Propensity for preservation and protection in the East is represented with pieces wrapped and guarded by tulle and cotton silk. While the South is symbolised by hedonism and chaos, the North is shown as a grid system in conjunction with nature. The whole collection is stylistically built on the power of individuality in the West.

In September, Hussein Chalayan was awarded this year’s Panerai London Design Medal – the capital’s top design prize. Following this award, his work was featured at the Victoria and Albert Museum (V&A), as part of this year’s London Design Festival.

Lefkoşa born, 48-year-old Chalayan has twice been named British Designer of the Year (1999 and 2000) and was awarded an MBE in the Queen’s Birthday Honours List in 2006. In 2016, Wallpaper Magazine named him as one of the world’s top 20 design “game-changers”.